With the recent slew of raw data we have about hitters, based on Statcast, new metrics based on that raw data have been developed to predict hitter performance, based on objective measurements, such as bat exit speed and launch angle. One of these metrics is the expected weighted on base average, or xwOBA. It is meant to compare directly to wOBA, in a manner similar to that of xFIP to FIP comparison's for pitchers. And in the same manner if xFIP-FIP is a positive number for a player, as a baseline, you expect a player to improve next season, and the opposite if it is a negative numbers. Of course, this is one factor, and additional factors, like training, mechanics change, adding muscle etc, will affect future performance; however, unlike xwOBA-xOBA, they are hard to measure.

wOBA tries to measure a player's total offensive performance based on a series of weighted operations on offensive events on a players. The link will give you some basic information on the metric. xwOBA is a similar formula based on Statcast exit speed and launch angle. The link explains in detail the metric.

Here are the xwOBA for the 2017 Twins' batters in two groups:

The ones expected to improve in 2018:

The ones expected to decline in 2018: 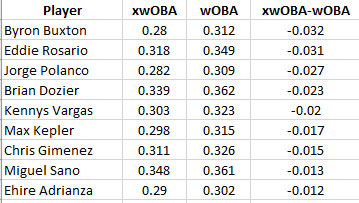 As indicated only Joe Mauer, and in a lesser degree, Jason Castro are projected to improve, as far as the 2018 startling 9 of the Twins go. Pretty much everyone else is projected to decline.

If one looks at several projections about what the 2018 will do, which are based on xwOBA, expect them to show an overall decline in wins.

There is a silver lining: Other than Brian Dozier (and free agent Chris Gimenez,) most of the Twins' hitters expected to decline based on this formula are young, and the other factors like development, changes in mechanics, could easily trump these projections. If the 2017 Twins' hitters were an older bunch, things would have been different.