Mrs Ash and I went to Worcester last night to see their brand-new AAA team, the Worcester Red Sox (known almost exclusively as the Woo Sox).  It's part of our farewell tour in New England as we prepare to move back to Nevada.

We took a train scheduled to arrive an hour early, so as to have time to take in the sights, but mechanical troubles had us traveling about 5 MPH for the last 5 miles, meaning we arrived about when the next train was supposed to (though it became delayed too, in a ripple effect), and we found our seats only in time for the first pitch.

Polar Park, named for a local soft-drink maker, is a nice modern ballpark.  Most of the food tends toward mundane hot dogs and nachos, but we did pass up the long line for the George's Coney Island hot dog stand (which is a satellite of a Worcester landmark that Mrs Ash and I ate at on one previous trip to the city) and likewise long line at a BBQ stand.  The park was pretty close to a sellout crowd on this Wednesday night, not too surprising for a brand new team/park but the waning of the pandemic makes everything hard to predict.

The game itself was not much better than the train ride, a 18-5 drubbing at the hands of the visiting Rochester Red Wings, who apparently took the Twins' snub personally when St Paul came into the league, as they have aligned themselves with another franchise, the Nationals. What ingrates.  The visitors had the losing record (7-18) coming in, whereas the home team was 15-10, but the game didn't reflect the past.

Daniel Palka was in the lineup as DH for the Wings, and Chris Herrmann subbed in at catcher for the Woo Sox. Twins fans may recall they were once swapped for each other in a trade with Arizona.  Both have bounced around a bit since then, still seeking another chance in the majors. Palka had much the better of it last night, launching home runs in two consecutive innings; I don't remember Herrmann doing anything except look tall behind the plate.  Palka was aided by a very short porch in right field, with an outfield wall insufficiently high to moderate the advantage to a dead-pull lefty bat.  Kind of the opposite layout to Fenway Park in that regard, and the AAA decision makers apparently chose to not even try to draw comparisons to the major league counterpart 40 miles to the east. (Although, they do play Sweet Caroline during the 8th inning, because Red Sox.)

Among young talent in the lineups, Rochester had only Luis Garcia, a highly-regarded 21-year old second baseman, and Carter Kieboom, who I thought was a "perennial prospect" but turns out to be still only 23.  Worcester had a broader smattering of starters 25 and under,  I'm not sure anyone really stood out for me - I saw various bad reads and weak arms in the outfield, and a strange decision by third-baseman Yairo Munoz to not dive for a grounder than looked reachable.

Until about the 8th inning or so, none of the pitchers for either side registered higher than about 90 on the radar gun.  Not many sharp breaking pitches diving into the dirt, for that matter.  Made it nearly through the entire first inning before a walk and then a strikeout.  Coincidentally or not, 26-year old Wings starter Sterling Sharp was the youngest of ten men (five for each team) to take the mound.  For pitchers, AAA seems to be the graveyard of dreams, and few with a live fastball or good sliders stay there for long.  AAA is really kind of my least favorite level of baseball, but oh well.  On a less grouchy note, Rochester hurler Joan Baez came into the game for the sixth inning; if they played Diamonds & Rust on the PA system when he was introduced, I missed it.

I snapped a few photos at the park but none came out as anything interesting. Here's a routine shot of Josh Ockimey striking out against Wings starter Sharp in the fourth inning. 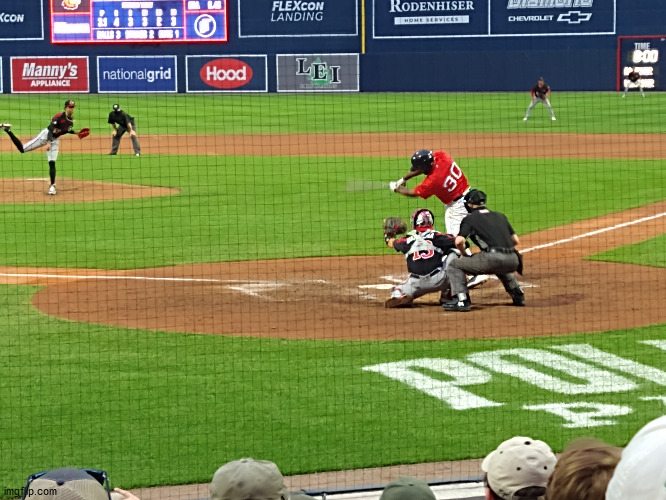