As the stove continues to get hotter and hotter and the Carlos Correa decision seems to be moments away, the value of his clubhouse presence is brought up as a hedge against skill regression with age. Even if he isn't able to play at an above average level, at least they'll have him in the clubhouse. But what do we actually know about the concept of "clubhouse presence" when it comes to measurable effects? Sure, it's a fun idea to throw out to express a hypothetical value, but what does it actually mean?

Get ready for an ol' Gregg deep dive. I'm going to be looking into a few findings from the field of psychology to explore what clubhouse presence is and what there is to be gained from someone like Correa. As a caveat, this type of research is still in its infancy--no more than perhaps 20 years old. Few psychologists, even sport psychologists, dive into team processes from a social perspective. Beyond that, meaningful data on the highest performing athletes (i.e., MLB teams) is nearly impossible to measure directly, given that most researchers off the street don't have the opportunity to walk up to pro athletes and start asking them questions about mental factors.

With that out of the way, here are three findings I think might be worth digging into. References for these studies will be listed at the bottom of this blog, and links will be available to the studies if I can find publicly-available versions. If you have access to a research database through a university or something similar, you might be able to locate those behind a paywall.

Teams have formal roles like first baseman, middle reliever, and leadoff hitter that are related to performing on the field, but they also have informal roles that are more about interpersonal actions. About 10 years ago, a group of scientists led by Cassandra Cope of Laurentian University performed a content analysis of Sports Illustrated articles to identify potential informal roles on a team, then they got input from about 100 athletes to narrow down the list. The list they came up with had archetypes like verbal leader, sparkplug, cancer, and comedian. Since that time, researchers have been trying to understand what meaning those labels might have.

In 2020, a study was published by a team from Wilfrid Laurier University led by Jeemin Kim that looked into outcomes of having certain players on teams. Although they did not get game data for performance, they did survey 16 college athletics teams, one of which was a baseball team. They found some interesting results, such as teams with more cancers (I won't name names as an example, but you know), distracters, and malingerers (i.e., dragging out injuries) tended to be rated as less cohesive. Teams with comedians and enforcers (i.e., dudes who will protect their teammates) being on a team was associated with more cohesion.

Most pertinent to this conversation was the interesting finding that there was an inverted-U shaped relationship between verbal leaders and satisfaction with how the team attacks its goals (winning). Too few leaders was bad, and too many was even worse. The sweet spot seemed to be around 10-15% of the team being seen as a leader. In MLB terms, that would be 2-4 players per team. Correa clearly fills that role, and this is a team that is not known for having many verbal leaders. Byron Buxton fills more of a nonverbal leadership role, leading more through example. Sonny Gray comes to mind as a verbal leader, but the list runs out quickly. There are clearly not too many verbal leaders on this team, so Correa fits nicely in this regard.

An approximation of this relationship: 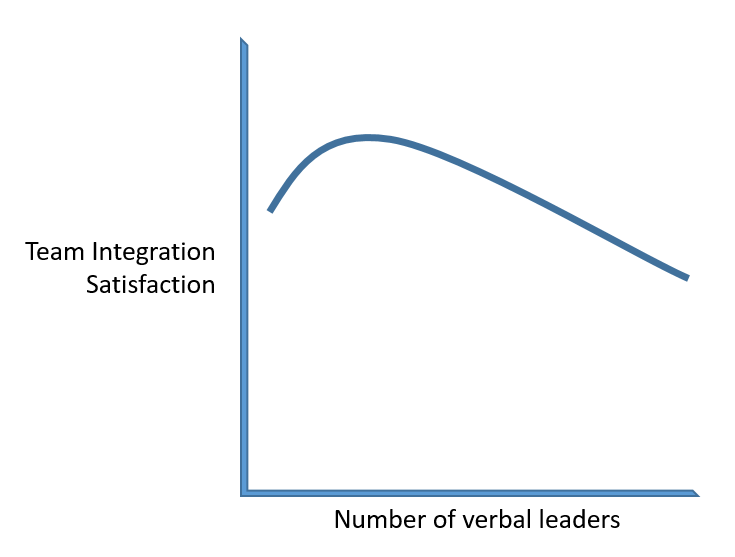 This second finding came from researchers Jamal Shamsie of Michigan State and Michael Mannor of Notre Dame. In their 2013 paper, they analyzed MLB teams from 1985-2001. For these kinds of studies, there are some assumptions that need to be made, given that the researchers didn't personally survey any of the players on these teams. On the bright side, though, they can attach their findings to performance data.

In their paper, they look into tacit knowledge. Tacit knowledge is knowledge that cannot be easily taught, through things like having conversations or sitting in a class. Tacit knowledge often comes from experience and is difficult to communicate. To represent this type of knowledge, the researchers rated teams based on things like years of managing for the skipper, tenure of managers and players with their current teams, number of lineup changes, and number of games played in recent years. In total they used eight markers for tacit knowledge and all of them were associated with team winning percentage.

Carlos Correa brings one big piece of tacit knowledge studied in this paper that most of the Twins lack: playoff experience, which was positively associated with winning percentage in this study. Although it's difficult to have someone say "This is how you win in the playoffs," the mere fact that he has such an extensive history playing in October would provide the Twins with something that few remaining free agents have to the same degree that Correa does.

Okay, this one is really fun. It might not relate super strongly to Correa, but this is one of my favorite papers ever. Faultlines within teams refer to dormant things that can fracture a team but are only seen during conflict. Often, they can be similarities between team members that can cause some to take one side in a conflict and some to take the other side. When there are several similarities between members, the fraction can be even more dramatic and likely.

In a 2016 paper written by a team of researchers led by Katerina Bezrukova of Santa Clara, MLB teams were analyzed based on faultlines. The factors they highlighted were age, race, and nation of origin.

This example took me a while to figure out, and it's not perfect, but it should help in understanding what I'm talking about. Imagine that baseball is a team with only four players. On the left we have Team 1: Miguel Sano, Royce Lewis, Jake Cave, and Jose Miranda. On the right we have Team 2: Joe Smith, Caleb Thielbar, Gilberto Celestino, and Jhoan Duran.

Please do not read this as me assuming the quality of relationships on last year's team. I picked these players soley based on how I could arrange them for the example. Given that each player on the left side shares one similarity with each other player, it would be more difficult to fracture that team than the team on the right side.

Anyway, there's a very complicated formula used to calculate fau, or the strength of faultlines within a team. In their study, the team looked at every MLB team between 2004 and 2008. Not only did they find that teams with stronger faultlines tended to have poorer records, but player groups tended to perform better as a whole when the faultines between those subgroups were weak. Player groups used here were starting batters, bench batters, starting rotation, and bullpen.

As a veteran Latino player, Correa can relate to both veteran players and players from Latin American countries. Other than Jorge Polanco and Jorge Lopez, none of the Latino players projected to play for the squad next year have reached their late 20s, but there are several players from the USA who are in their late 20s. Having the type of players who can bridge gaps is important.

There are a lot of fun findings that I don't have the room to go into in these three papers (I say as I wrap up a 1,500 word blog), and I encourage you to check them out, if you're into that thing. There is evidence out there that the interpersonal side of team construction does make a difference, but we still have a long way to go. If people end up enjoying this deep dive, I have other research I'd love to share.