Welcome, readers! In past years, I’ve taken control of a game thread once or twice a year and ran a Strat-O-Matic game in real time alongside the Twins game in real life. With the game threads headed in a different direction, I’ve thought about how I might deliver some Strat-O-Matic content to Twins Daily in a better-suited format. After some deliberation, I decided to start a blog here and see if this format will satisfy the masses. Just so you know, I work a 9 to 5 job Monday through Friday and I’m also a content creator at Purple Pain, a Vikings forum, so my time is limited, but I hope to bring a somewhat consistent source of simulations this season. And with that out of the way...

Today I will lead off with a box score from my simulation of Sunday’s (6/2/19) game against the Rays. In my next blog posts I’ll explain my system of simulation in detail - I don’t actually use the cards that came with the game, I’m using my own custom version that I’ve been working on for the past 8-9 years. Strat-O-Matic sets are expensive and I don’t want to wait a full year after the 2019 season ends to get my hands on the 2019 cards. While my simulation isn’t going to have the pinpoint accuracy and realism that the original game provides, I think it can work as a quick-and-dirty version that is far more flexible than the original game could ever be.

Now, onto the game itself: 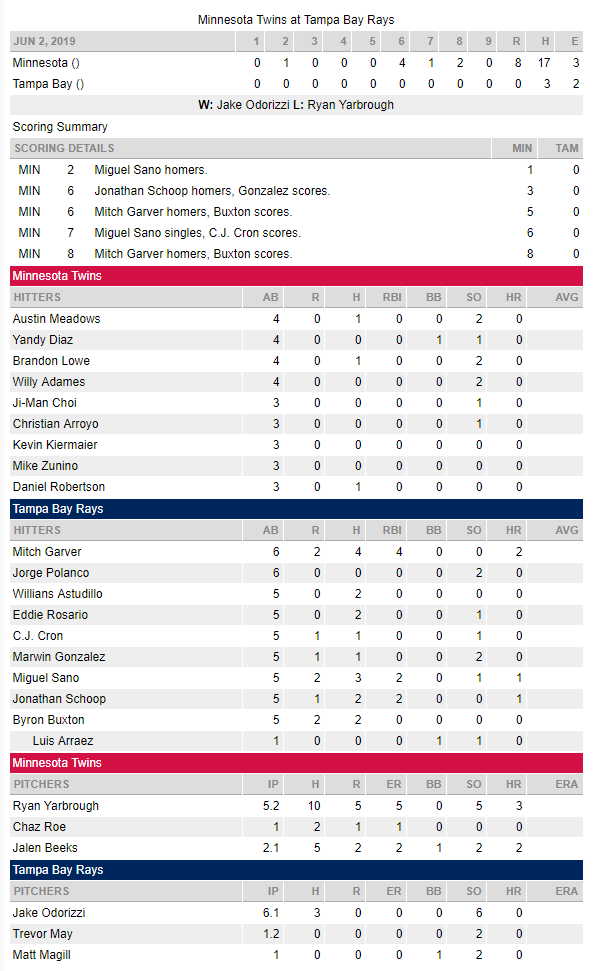 This game went very similarly to the actual one, with the Twins getting a 8-0 lead at one point, as compared to a 7-0 lead in real life. However, no bullpen collapse happened and it was a rather uneventful outing. Mitch Garver kicked some serious butt in his first game back, and Sano hit a 1B, 2B, and HR. We'll have to see if Garver can stay hot and if guys like Polanco can have better games next time out.

To-Do List: Too many errors. The X Chart, which determines whether a fielder will make a play or not, is rather harsh on fielders who aren’t elite. The chances of rolling an error are far too high for my liking.

Also, I’m not sure what happened with walks - we saw just 2 in the game and both happened in the 9th inning. There is a solid 8.5% chance of a walk happening on any normal plate appearance, though that varies with the batter’s and pitcher’s tendencies. I won’t tinker anything in this category... yet.

A intricate breakdown on my unique Strat-O-Matic setup, and possibly another game simulated. I'm not sure how many games I'll get to, but I'd like to do a whole bunch (10 to 20?) and be able to see which players are doing the best in this simulation.