The Twins have just fallen to 11-19 on the season, including going 2-5 against arguably the two worst teams in baseball, the Texas Rangers and Pittsburgh Pirates. It's no secret that this season has not gone according to plan for anyone following the Twins, and unless a drastic turnaround is coming, which I'm not expecting, but certainly could happen, this team is going to find themselves as sellers come late July. it was debated last year whether the Twins should keep the core group of hitters in Polanco, Kepler, Garver, and Sano. Thirty games into the season, the answers seems to have been no, but we know that the Twins did. Of course everyone on this list isn't going to be traded, but I am willing to bet that a handful of them will be. I am only ranking players on the 40 man roster, so you won't see any Royce Lewis or Trevor Larnach's in here. 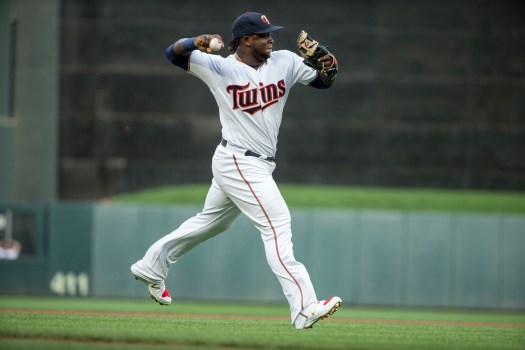 Matt Shoemaker is more likely headed to the waiver wire rather than the tradeblock, but there is a route where Shoemaker stays healthy and starts to pitch well for the Twins. I'm not counting on it. Shoemaker has struggled with availability in years passed, but still been a decent back end of the rotation option. If he gets back to throwing with an ERA in the mid-4's, and the HR rate stabilizes, there may be a team willing to take a shot.

Thielbar has been a nice success story since coming back for round two with the Twins. It appeared that he was going to retire from Major League Baseball, but instead he's turn into a nice niche weapon for Rocco. Thielbar relies on a mid-90's fastball, and a curveball below the speed limit. He isn't going to get much of a prospect return at all, but if he keeps his strikeout rate at 50% (he won't, but I do think 30% is possible), there will certainly be a team or two willing to trade for the southpaw.

Say it ain't so! La Tortuga is a jack of all trades type of player who has a profile so far away from the average MLB hitter, that he's almost valuable. I don't think any MLB team is going to trust him to play behind the plate, and he certainly isn't a plus in the field, but an NL team could have interest in La Tortuga's bat to ball skills as a pinch hitter late in ball games. Much like Thielbar and Shoemaker, the prospect return is going to be almost nonexistent, but he has more than waiver wire value.

There's no doubt that the signing of Alex Colome has been a failure thus far. We've seen him blow multiple saves and get hit hard, and Rocco has recently used AAAA arms like Brandon Waddell in extra innings over an overly rested Colome. However, there is still plenty of time until July, and Colome can certainly up his value. He has closer experience, and front offices love that even if us fans think that saves are a useless stat. Colome isn't going to get much more than a flier type prospect, but he has value assuming he finds some sort of his pre-2021 version

Former top 10 prospect Miguel Sano came bursting onto the seen in Minnesota, and even made an ASG appearance in his third year with the ballclub, and had all-star level numbers in 2019. However, we've seen him struggle mightily the past year and change, especially with the strikeout. When Miggy is going well, he's crushing fastballs, but right now his timing is off. It's likely that Sano will find his timing eventually and go on one of his hot streaks, but they may be on another ball club, especially if Alex Kiriloff is back sooner than expected. I do think the leash is longer than some Twins fans hope, and the trade value is as low as it's ever been when you take into the fact that he's owed 11 million dollars next year, but a team could fall in love with the power Sano provides.

In order for the Twins to be the contenders that we all hoped they would be this year, a lot hinged on this mans shoulders. We know that Jorge struggled with an ankle injury in 2020, but we all naturally assumed that the ankle would be ready to roll in 2021, and with that the gap power would come back. As we now know, Polanco still looks like he has the same bad habits that stemmed from the 2020 injury, and the contact rate has fallen. He's already struck out 22 times in 113 at bats. When Polanco made the ASG in 2019, he struck out only 18 percent of the time. We also know that he was moved from the SS position, and the advanced numbers don't like him at 2nd anymore than they did at SS. Fangraphs has him on pace to finish with a -5.0 UZR, assuming he fields 1,000 innings at 2nd.

The Bringer of Rain has been a quality player when he's on the field for the Twins, but the fact of the matter is that that is no given. Donaldson plays a great third base, and provides pop in the middle of the lineup, but we've already seen him hit the IL once this year with leg problems, which also caused him to miss a majority of the shortened 2020 season. Donaldson also has his contract hanging over his head, which is guaranteed for at least 2 more seasons at 21 million per year, with a team option in the 2025 season for 16 million. When you combine the health issues with the contract, I think it's very unlikely that a club takes a risk with JD, unless the Twins are willing to eat some salary.

Hansel Robles was brought in on a cheap prove it deal this past offseason, and so far this year the results are about as expected. Robles had the role of the closer position in Los Angeles the past few years, but he lost some fastball velo which limited his effectiveness. So far into 2021, the velo has came back to Robles, and he's been effective. Robles is likely a middle reliever on a world series contender due to the fact that he gives up the free pass too often, but he can thrive in his role while bringing that closer experience to the table. Robles advanced numbers from baseball savant are very inspiring, which give him a sub-.200 xBA, and an expected ERA of 3.44. Out of all the names on the list, I think Robles is the most likely, and the first of any Twin player to be traded.