Most of you probably don't know that I am a high school math teacher and junior varsity baseball coach. Recently, a student of mine asked for me to write about the record breaking home run and strikeout rates from the 2017 season. I'm going to dive into those numbers for you today, but then also look at how these numbers are reflected in the projected 2018 opening day lineup for our beloved Twins.

To get a good set of data, I took the K% (K/PA) and HR% (HR/PA) for the last twenty-one major league seasons. Below you will find a graphical summary (follow link for a closer look) of my findings:

You will notice that although both statistics see an increase over this timeframe, there is a much more significant increase in HR% versus K%. The most notable differences in both stats can be seen in the "statcast era" from 2014-2017 where exit velocity and launch angle data as literally been changing hitters approaches at the dish. Furthermore, it's been well documented that 2017 was a record breaking year for strikeouts and home runs.

The last two seasons have seen the Minnesota Twins hit the 3rd (2017) and 4th (2016) most home runs in franchise history, which includes the 60 years they spent being known as the Washington Senators. Interestingly enough, they finished 2nd (2016) and 3rd (2017) most strikeouts in a single season over that same time. (If you're curious, the 2013 Twins struck out a franchise record 1,430 times but only hit 151 homeruns which is 70 less than their 2017 total. Ouch.) Comparably league wide, their 2016 and 2017 combined totals put them 15th in the league in homeruns and 6th in the league in strikeouts. Below shows where the each Twins player ended up in 2017 when comparing strikeout and homerun percentages: 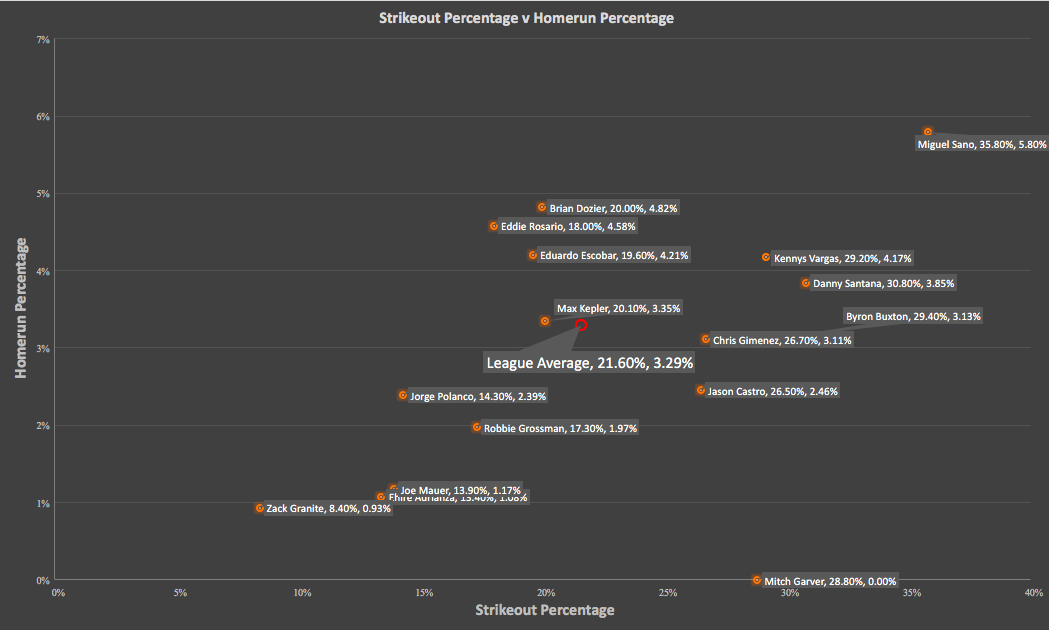 Not surprisingly you will see Miguel Sano lead the team in both categories and Joe Mauer was at the bottom in both categories, among the regulars. In the middle, you see the average for 2017 was a 3.29 percent homerun rate and 21.6 percent strikeout rate. Ideally, we want our Twins to be closer to the Doziers, Rosario, Escobar, and Keplers of our lineup. Guys who finished below the league average in strikeout rate but above in homerun rate. Here are some of my takeaways:

This season is huge from the Twins. They have yet to extend any of their young talent and there haven’t been any rumblings about contract talks. Maybe the organization is waiting to see what happens with Yu first or maybe they are waiting to see what 2018 entails. We all know this is a huge year for our young core. We’ll be looking to see if guys like Escobar and Roario are for real, while looking at Kepler and Berrios as possible breakout stars.

What do you think about the data? Is it meaningful or are there other numbers we should be looking at here?