In the baseball world, this cliche might not be completely true. Otherwise, there would be teams full of Andrelton Simmons-type players. There are a lot of other factors that go into the overall equation. Teams need offense, they need pitching, and sometimes a little luck goes a long way.

Baseball line-ups aren't usually built with a defensive as the first priority. Rosters usually need to have the right combination of defense and offense. You can hide a Josh Willingham-type player in a corner outfield spot if he is mashing a bunch of home runs.

What would the Twins line-up look like if it was made up completely with defense as the only factor in making roster decisions? 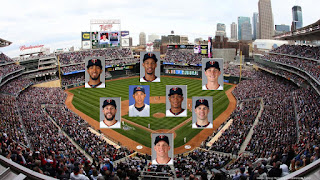 In this line-up, there are no converted infielders pushed to a corner outfield spot. This team is all about speed, range, and having a cannon for an arm. Luckily for the Twins, their optimal defensive line-up is one that could see some significant playing time this season. All three players have seen time in centerfield during their minor league careers. Buxton was just named the best defensive player in the minors by MLB.com and Rosario finished second in the AL with 16 outfield assists. Add Kepler to the mix and you have one strong trio that would be able to cover foul pole to foul pole with ease.

Kurt Suzuki has taken a beating behind the plate over the last couple seasons and he has his flaws as a defensive catcher. The Twins traded Aaron Hicks to the Yankees for catcher John Ryan Murphy this offseason and his defense is fine for now. Two players, Stuart Turner and Mitch Garver, are the future of the position are in the Twins system. Turner is the better defensive option and he could probably hold his own at the big league level behind the plate. He could be up as early as this September as he should spend a good chunk of the year in Rochester.

Ever since his high school days, Mauer has been considered a good athlete. That's why there was little concern over him making the defensive transition from catcher to first base. Everything hasn't been perfect for Mauer in the move to a corner infield spot but he continues to learn the nuisances of what has become his new home. Mauer's former roommate, Justin Morneau, was a very strong defensive first baseman. While Mauer might not be to that level yet, he is still a strong defensive option.

Brian Dozier's defense has been on a steady decline over the last three years which makes it a little easier to look past him when creating the team's best defensive line-up. Another prospect with a lot of time at shortstop could be a better solution in the middle infield. Jorge Polanco, like Dozier, would need to shift from shortstop to second base. There have been plenty of questions about whether or not he will be able to stick at shortstop. This solves the problem by moving him off the position and possibly offers a little up-side over Dozier and his declining defense. A younger, more athletic player seems like a better option over an aging Dozier.

It's hard not to be impressed with how far Trevor Plouffe has come at the third base position. As he transitioned to third from shortstop and a brief taste of the outfield, he looked stiff and unable to adjust to the fast pace of being at the "hot corner." By the end of this season, he ranked as one of the best defensive third basemen in the American League according to the SABR Defensive Index. Miguel Sano might take over this position in the near future but Plouffe's defense will be hard to top.

Unfortunately (or fortunately depending on how you look at it), the Twins best defensive option at shortstop hasn't played a game above the High-A level. Many of the top national prospect rankings peg him as the best defensive infielder in the organization with quite possibly the best infield arm. His offense might be a couple years away from being big league ready but his defense is ready to make the next step.

Now it's your turn. Who would be in your defensive line-up? Leave a COMMENT and join the discussion.