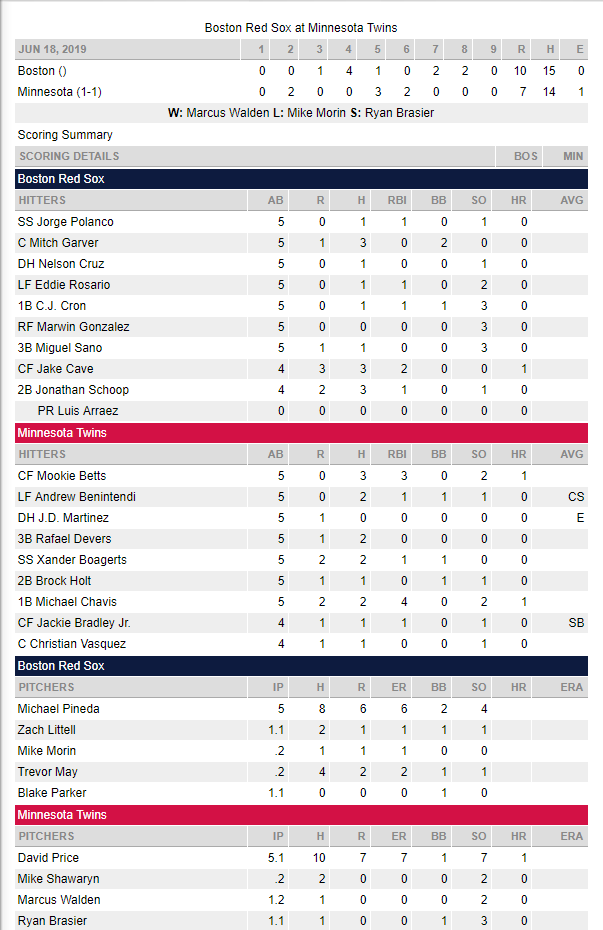 The Twins struck first in the second inning with Sano notching a one-out double, followed by a Jake Cave two run homer. It was a no-doubter, as I had a 6-12 roll, which meant that unless the pitcher is very good at preventing HRs, this one was gone. Price is good at preventing homers, but not great, so the Twins jumped out to a 2-0 lead.

The Sox chipped away at the lead as Betts hit a RBI single in the 3rd inning, but the bats exploded in the 4th inning. What followed was an error to get Martinez on 1st, a Devers double, Chavis double, Bradley Jr. single, Betts single, and a Benintendi single. The Red Sox took a strong 5-2 lead that they later strengthened to a 6th run.

The Twins fired back in the bottom of the 5th, though, as Cave lead the inning off with a triple. Schoop singled him in, followed by Garver singling him to second. We then saw Rosario hit a double and Cron hit a single to make the game 6-5 by the end of the 5th.

And then in the 6th, the Twins struck again! Cave hit a double (this dude is on a tear!), followed by a Schoop single that moved him to 3rd. David Price was pulled for Mike Shawaryn, who immediately gave up a game-tying single to Polanco. Garver then hit a double that scored Schoop, which gave the Twins a 7-6 lead.

But then the bullpen struck - Littell gave up a single, and I pulled him and placed Morin in with one out already recorded. Then Michael Chavis, the young Boston 1st baseman, nailed a 2 run homer to give them a 8-7 lead. This one seems like a game of tug-of-rope.Trevor May then came out to pitch the 8th and gave up 3 singles and a 2 run homer to Mookie Betts, making it 10-7. This is getting real ugly!

However, in the 9th, Cruz lead off with a single and Cron walked to get the tying run up to the plate. But Gonzalez and Sano both struck out and Brasier got the save. We are now 1-2 in Strat-O-Land.

Another one went down the drain today... but at least this one didn't go 17 innings. I think my record for my longest Strat-O-Matic game went 13 innings. I'd like to see if I could ever break that number.

Here's hoping we can win one next time out!