The Twins were able to scratch cross just a single run in the first, despite hitting 4 singles. Two of them were infield hits, not allowing for runners to take an extra base. Schoop struck out with the bases loaded to end the inning... and then Pineda fell apart.

Pineda gave up 2 runs in the second, 2 in the third, and despite pulling him early in the fourth, he gave up another 4 runs. Asdrubal Cabrera let the Rangers take the lead as he hit a 2 run HR in the second. The next inning, Pineda gave up two singles and then a double to Mazara. Then, he allowed the bases to be loaded in the fourth and then I pulled him. Matt Magill promptly allowed all three runners to score on a RBI groundout and a single. This is the third straight start Pineda has had in this Strat-o-Matic simulation, and I've fed up with him. Down 8-1 in the fourth, this game is pretty much over already.

And it was, despite our bullpen's best efforts. Perhaps, if I pulled Pineda an inning earlier, we could have had something. The Twins offense was only able to scratch a few more runs across with a Buxton RBI single in the 6th, and then a Arraez sac fly followed by a Sano RBI single.

Highlights: Sano is crushing it in Strat-O-Land, as he's added another 4 hits - 2 singles, a double, and even a triple. Kepler got on base 4 times but only scored once. The fielding was better this time around, with just a single error (that did lead to an unearned run). The Twins are now 1-3 in my simulations... I hope for a win next time around. 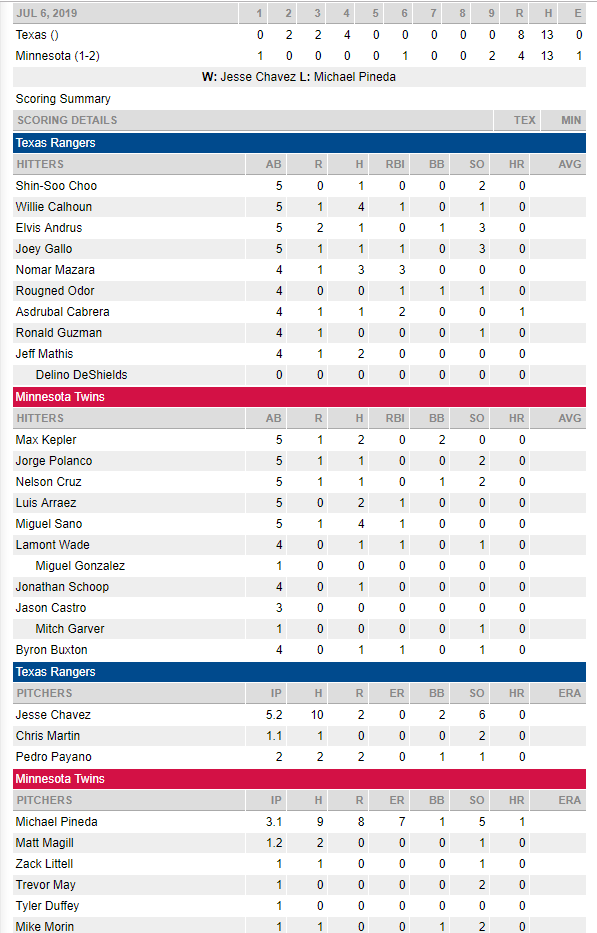