The first place Twins and the first place Yankees clash in a Strat-O-Matic battle of epic proportions! Both teams carry high-powered offenses in, and the while the real life game was exciting, this one was too... for a while.

You would expect the Twins and Yankees to score a lot of runs. Well, you won't be disappointed by this result!

The first inning went off with a bang, as both teams loaded the bases with no outs, and both teams came up with 3 runs out of the 1st. The Yankees got a RBI single from Gary Sanchez, an RBI walk Luke Voit, and an RBI groundout from Gleyber Torres. Meanwhile, the Twins got an RBI single from Rosario, and LF Tauchman errored another run in, and then Gonzalez hit a sac fly.

The second inning didn't have a baserunner, oddly enough. Then the Yankees struck back in the 3rd inning - Sanchez singled, Sano errored a ball at 1st base, and Luke Voit crushed a 3 run HR to make it 6-3. But that's not all! Perez inexplicably allowed the bases to get loaded again, just for Judge to hit a 2 RBI double to make it 8-3. Ouch. And now I'll have to dive into the bullpen!

Sano nailed a solo HR in the 3rd, inching the Twins closer at 8-4. Then the Yankees piled on 3 more runs in the top of the 4th with Tyler Duffey pitching, with a 2 run HR from Voit and a solo shot from Tauchman. The Twins scratched one more run across in the 4th with a Schoop triple and a Polanco triple... very unlikely to happen in real life, but I'll take it.

I got Lewis Thorpe to pitch clean 5th and 6th innings, which was nice, for a change. The Twins hitters found some life in the bottom of the 6th against Luis Cessa, as Arraez led things off with single, followed by two more singles from Garver and Polanco, making it 11-6. Cruz struck out, but Rosario was able to hit a sac fly, making it 11-7.

And in the 7th, Cessa returned to give up a double to Gonzalez, an RBI single to Kepler, and a double to Schoop, making it 11-8 with runners on 2nd and 3rd one out. Unfortunately, Chad Green was able to come in and save the day, getting three outs in that RISP situation.

Cody Stashak took the 8th and 9th and did a great job in his first MLB appearance, giving up just a single hit and a walk. However, being up by just 2 runs caused the Yankees to get Ottavino and Aroldis Chapman pitching, and the Twins' batters were blown away by these two. We've lost again, dropping our Strat-O-Record to 1-4. Very disappointing, boys! 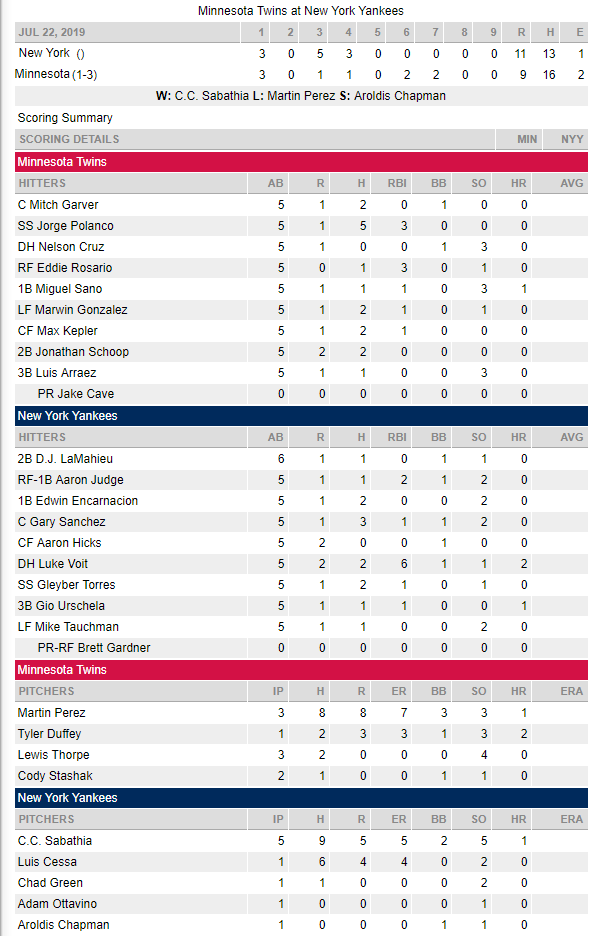