The Twins have stunk it up in the playoffs in real life, but would they do the same in Strat-O-Matic land? Let's find out!

The Twins got a double from Polanco in the first inning, and he moved to 3rd on an error that let Rosario reach, but they failed to knock any runs in. The Yankees had the same fate, as they left the bases loaded in the first after a Judge single, Encarncion double, and a Stanton walk.

The fireworks began in the second inning; Gonzalez took a walk, which was immediately followed by a Cron HR. Then, with 2 outs, Mitch Garver launched one out of the park. The Twins took a 3-0 lead, and the Yankees couldn't do anything in the bottom of the 2nd to strike back.

Nelson Cruz sent a bomba over the fence in the third, making it 4-0. In the bottom half, Berrios struck out the side, which was impressive against Judge-Gardner-Encarnacion. I imagine this would have shut up the New Yorker crowd.

After an uneventful 4th inning, Polanco singled in the top of the 5th and Cruz advanced him to 2nd on a groundout. The Yankees then pulled James Paxton for Chad Green, but that move proved to be a poor one as Eddie Rosario immediately hit a 2 run homer, making it 6-0.

The Yankees finally struck back in the 6th inning, as Encarnacion and Torres collected solo HRs of their own, and I yanked Berrios after getting 5.1 innings with just 2 earned runs, which was mission accomplished in my humble opinion. I relied on Duffey to finish the inning. That was a mistake, as he gave up a double to Sanchez, single to Urshela, and an RBI single to LaMahieu. I called on Romo to save the inning and he did, and we went on to the 7th inning with a 6-3 Twins lead.

The Twins increased their lead in the 7th on Tommy Kahnle, thanks to a Rosario single and a whopping 3 walks, making it 7-3. Sergio Romo gave up no baserunners in the bottom of the 7th.

Things got even better in the 8th, as Zach Britton walked the bases full. Rosario hit into a fielder's choice, nabbing one more run, and then Kepler swatted out a 3 run HR that broke this one wide open, MIN 11-3. The Yankees were not going to recover from this fatal blow.

For the lulz I sent out Graterol to pitch the 8th and 9th and he didn't even give up a run. Take that, dirty Yanks! 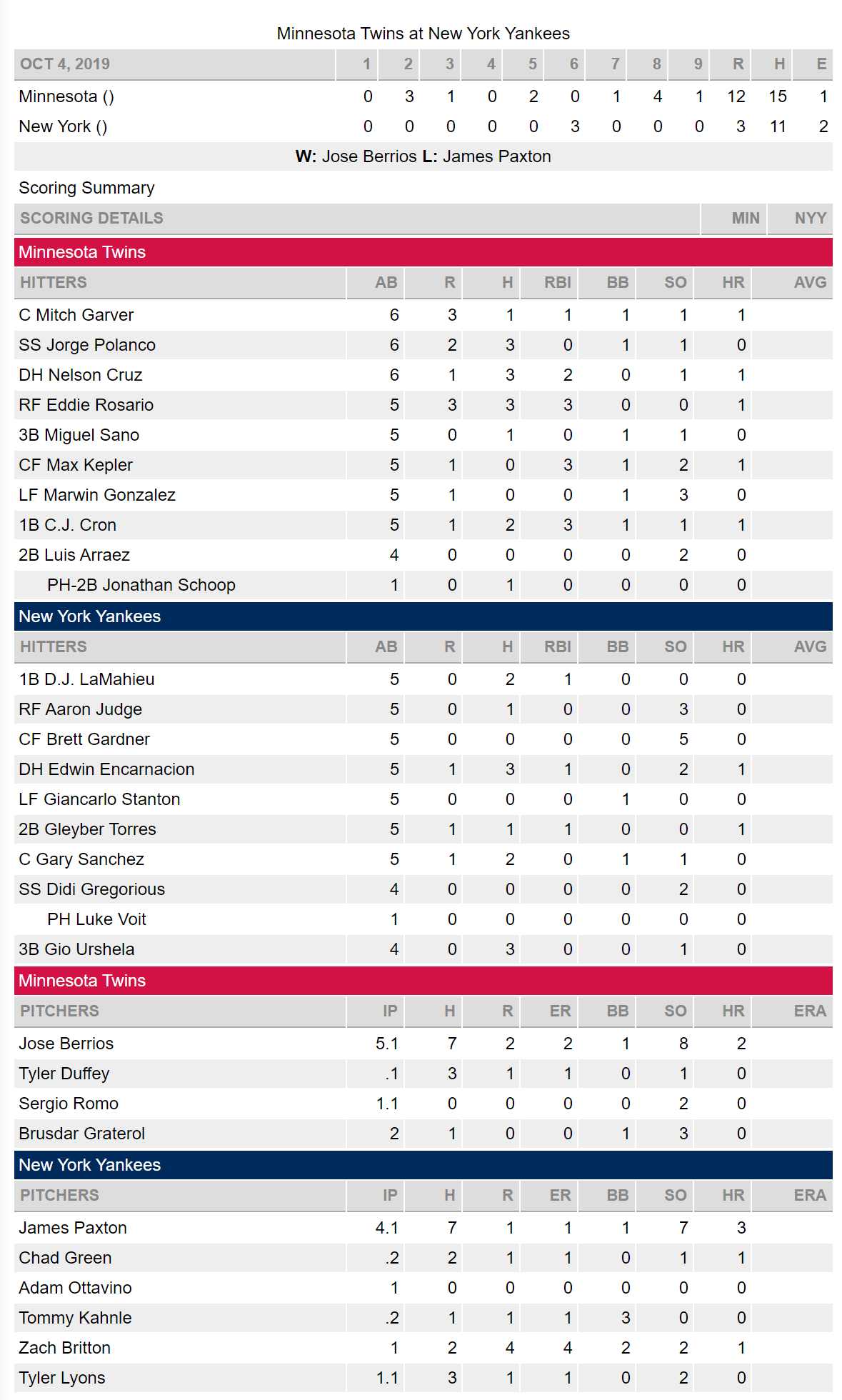 I'll tell you what, I wasn't expecting the Twins to win here. They've been a pathetic 2-5 in my simulations (I did a couple that I didn't report on in the past couple months), but they showed up today. And thus, unless the Twins make an unprecedented run in the ALDS, that will be my last Strat-O-Matic simulation of the year. I hoped you enjoyed this little mini-series.