With the breakdown of how things will work in Strat-O-Land, let's simulate another game. This is based off Friday's bout with the Tigers. 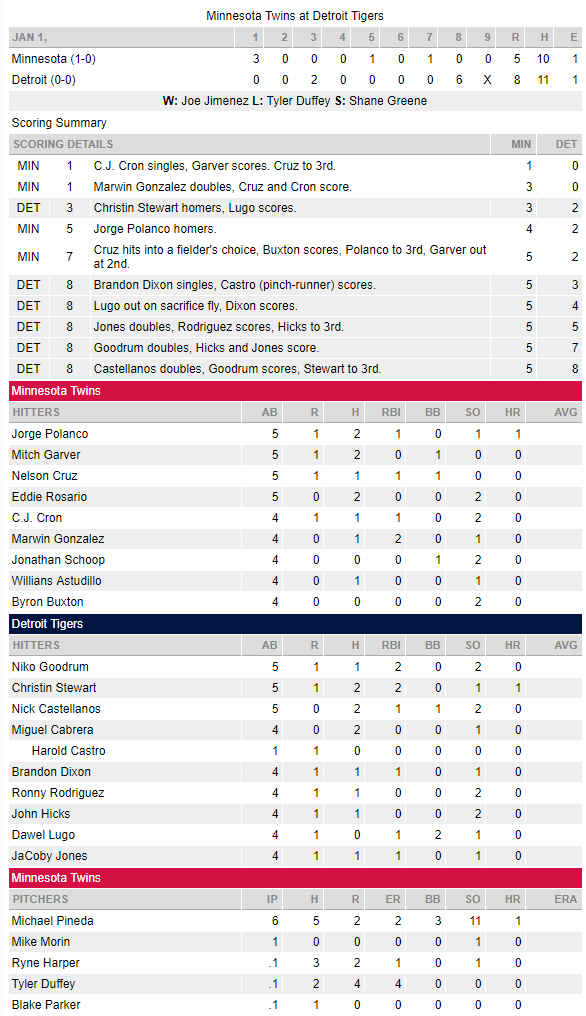 The Twins first inning saw singles from Garver, Cruz, and Cron, followed by a bases-clearing double by Marwin Gonzalez. It appears this offense is as devastating in Strat-O-Land as in real life.

Pineda started off great with 6 of his first 8 outs being strikeouts... but then he got crushed by Christin Stewart, who knocked in a 2 run HR in the 3rd inning against him. The 4th inning didn't go much better with a single, double, and walk that loaded the bases. Pineda was able to get 2 strikeouts and a flyout to escape that mess.

Polanco, who was 0 for 8 in Strat-O-Land thus far, lead the 4th off with a home run. The offense quieted down until the 6th inning arrived. Buxton reached on an error and Polanco doubled, followed by a pitching change and a walk to Garver. This loaded the bases for Nelson Cruz, who grounded out to third, but he did drive in a run to make it 5-2.

Pineda turned in a good 6 inning start, and Morin delivered a perfect 7th. Things got very hairy in the 8th inning when Harper gave up a double to Cabrera and then two singles. I pulled him for Duffey, who had a groundball hit to SS but Polanco errored on it, and then Lugo hit a sacrifice fly to make it 5-4. Duffey then gave up a double to the 9th hitter, Jacoby Jones, and the Tigers tied it up. And if you thought that's where this ended... nope! Duffey gave up another double to Goodrum which gave the Tigers their first lead at 6-5, and then Stewart singled. I yanked Duffey for Parker who then gave up an RBI double to Nick Castellanos, which gave them a 8-5 lead. Wow... 6 runs, changing this from a Twins 3 run lead to a Tigers 3 run lead. Brutal!

Garver hit a double in the 9th, but Greene shut the rest of the crew down, sealing a 8-5 win for the Tigers. Well that was disappointing!

Darn, I felt like we had that one. I guess the game knows the Twins' bullpen is a weak spot in real life! We'll head into our next matchup 1-1 and hope for some better pitching.