Game notes are topics that have come up during a game that we think deserve some more attention. That can be a player, a play and it could be a good thing or a bad thing, a mistake or a great play or anything really.

We used to have them at the end of our Game Recaps articles.

We made a logo and everything. Well, kind of. It’s a notes icon with some text on it. HEY! That’s what a logo is.

We just wanted somewhere to talk about some of the little things that happen in a game that we wanted to expand on.

So…this is our 1st separate Game Notes article and it’s about Game 2 between the Minnesota Twins and the Toronto Blue Jays from August 5th, 2022 and it had a pretty crazy ending so...check that out then let us know what you think with a comment or on social media..

*
Why Didn’t Guerrero Adjust for the Throw to 1st in Extra Innings?

Jake Cave swung through strike 3 but Blue Jays C Danny Jansen didn’t catch the ball so Jake took off running to try to get to 1st base before the ball. The ball rolled into foul territory on the 1st base side and when he corralled it and picked it up, his first thought was to try to tag Cave but he was already too far away so he tried to throw to 1st for the out.

2:31 into the Game Highlights video Cave was in the baseline and Guerrero, Jr. didn’t help his catcher out by trying to give him a better target forcing him to try to lob it over Cave so he threw it high and Guerrero didn’t catch it. Cave was safe at 1st and Nick Gordon advanced to 3rd on the play.

It’s obviously a fast play but, and any 1st baseman out there let us know, shouldn’t it be automatic as a 1st baseman when you see a ball go into foul territory on the 1st base side to step to the other side of 1st base for an easier and shorter throw? Jansen could also make a harder throw. If all the catchers and first baseman on the Blue Jays know that a ball in the dirt to the first base side in foul territory means the throw should be to the right (foul territory) side of 1st base every time, this play wouldn’t have been a problem at all.

The video of it above is 10 seconds long and Jansen gets the ball around the 4-second mark of the video so Guerrero has plenty of time to move to the foul territory side of 1st base for an easy throw for the out.

“And then in the 10th inning — I think if you want the ball hit to anyone, it’s Matt Chapman. And the strikeout to Cave — Jano blocks everything and I think when he tried to tag him, he kind of lost his angle a little bit on the throw to first and made it a little bit of a tougher play than it probably should have been. So, you look at those things as opportunities to get better.”

It was interesting to see that and not to see Justin Morneau point that out as a former 1st baseman. Maybe that’s not the case but it sure seems like that would make it easier, doesn’t it?

If you thought Twins fans were bad, try searching Danny Jansen on Twitter to see what Toronto Blue Jays fans think about their catcher. Wow!

The pitch landed just past home plate so it’s easy to see why it was a hard play for the catcher to make. He blocked it. That’s his job. Are there any catchers who would expect to catch that pitch? No way, right? It’s going to bounce into their chest protector and they just want to keep it in front of them so they can hopefully get to it quickly and keep the runner/s from advancing. 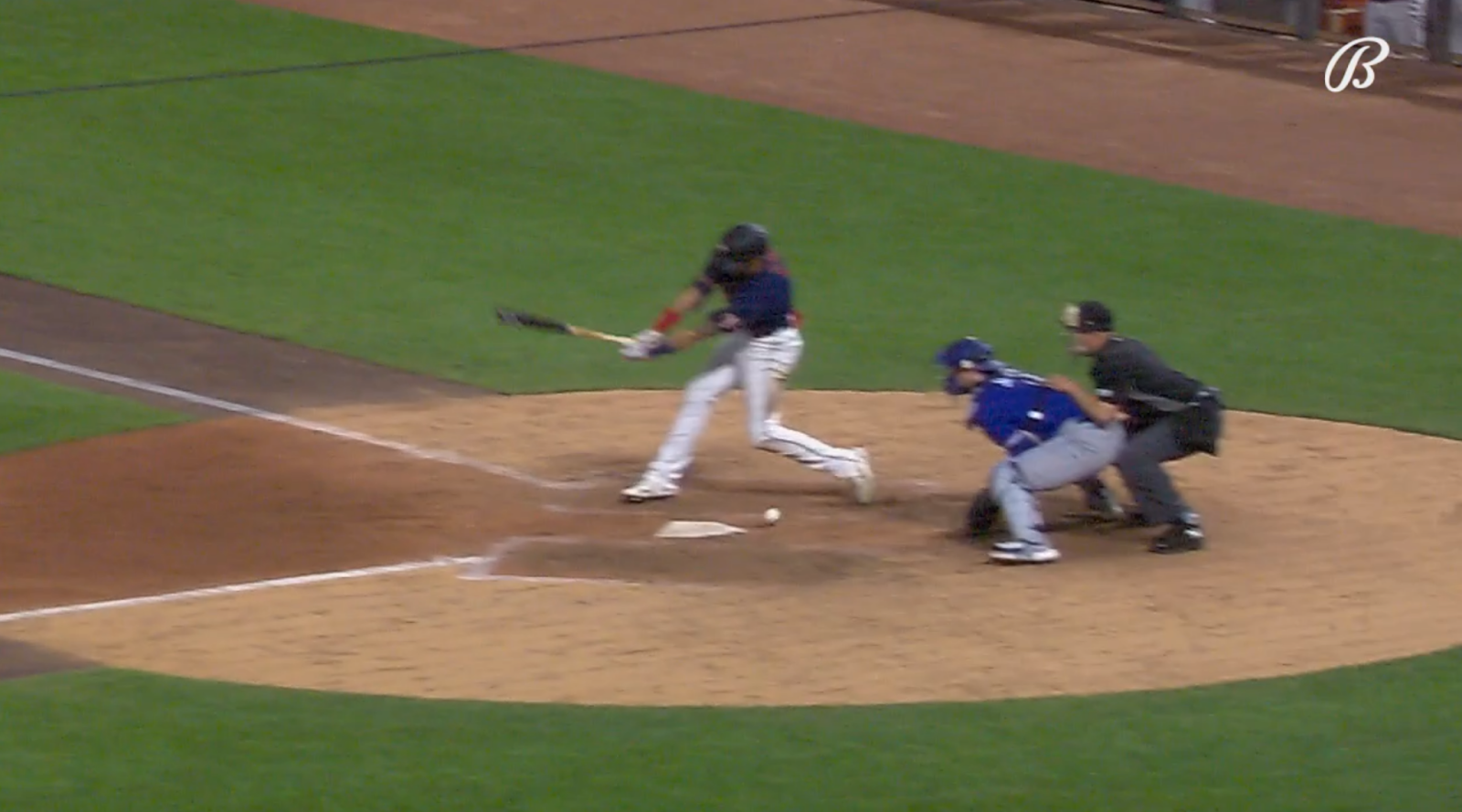 Then go to the throw to first base. Is it an easy throw? Yes would be the obvious answer but it’s not a normal throw for professional baseball players during a game. They’re throwing the ball hard on every play unless it’s a short toss of about 10 feet or so and those throws don’t usually have a runner between them and the throw’s destination.

**
What is Nick Gordon doing on that play?

He’s going back to 2nd base for some reason. Staying where he was seems more plausible but it’s almost as if he’s tagging up on the play going all the way back to 2nd base. He only advances to 3rd after he sees the ball get away from Guerrero.

How far away should he be from 2nd base? A quarter to a third of the way to 3rd base?

He was ripped for getting caught off 3rd in the 1st game against Detroit. Did that play a part in what he did here? Was he hesitant to go when the ball hit the dirt? Shouldn’t he go as soon as he sees it bounce away from the catcher? Would he not have made it to 3rd easily? Add in that Jansen knows it’s a force out at 1st while Gordon would need to be tagged out at 3rd and would he even try to make a throw to 3rd?

***
How ‘bout Gilberto Celestino avoiding the ball as he ran to 2nd in the bottom of the 9th?

Gilberto Celestino replaced Gio Urshela as a pinch-runner after Gio singled to lead off the bottom of the 9th. Luis Arraez then hit a ground ball to 2nd and Gilberto had to try to dance around said ground ball while simultaneously trying to get to 2nd as quickly as possible so he wouldn’t be thrown out.

The ball ended up going through his legs! 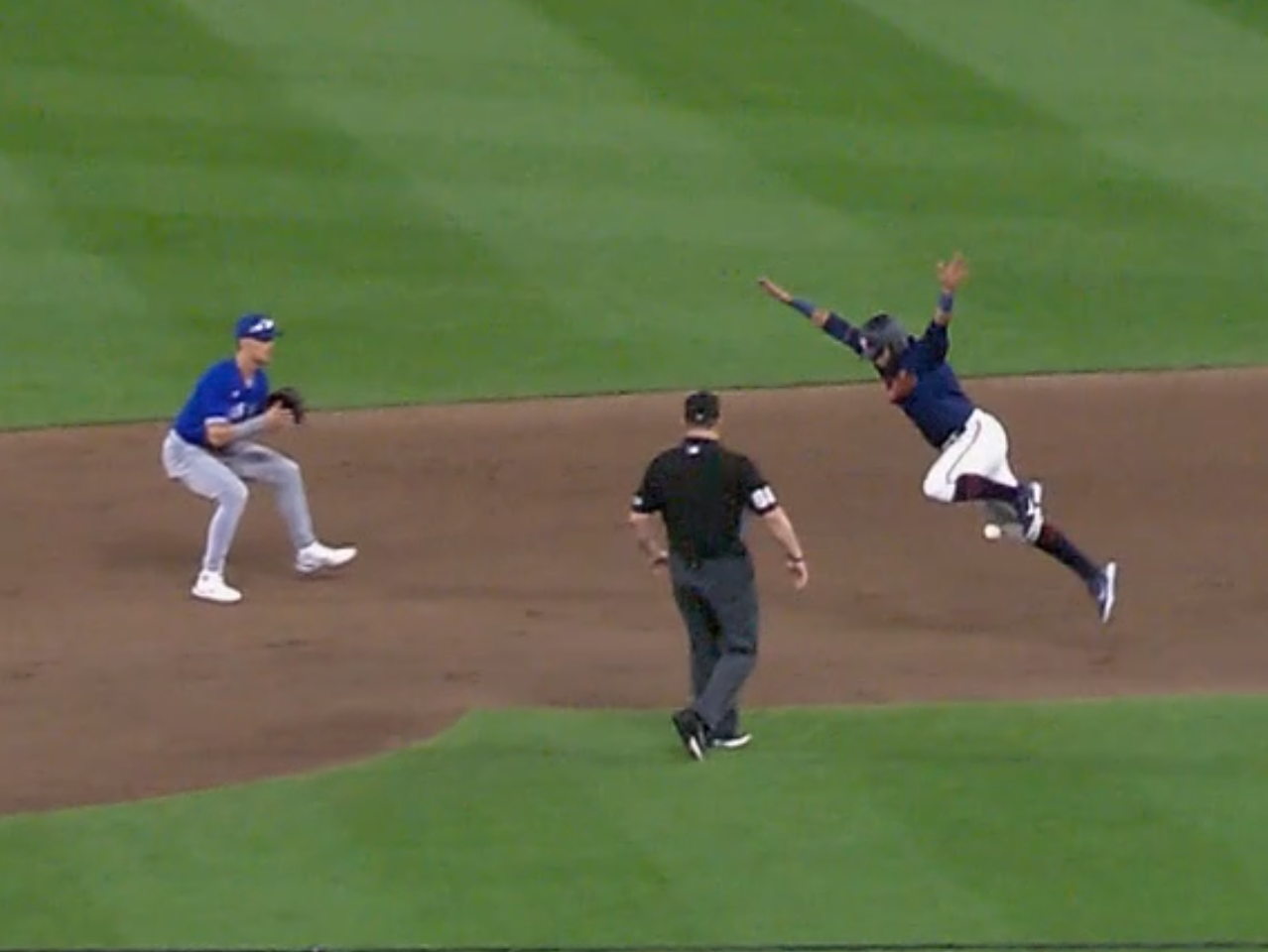 That’s some Edwin Moses stuff right there or that's his imitation of Superman landing!