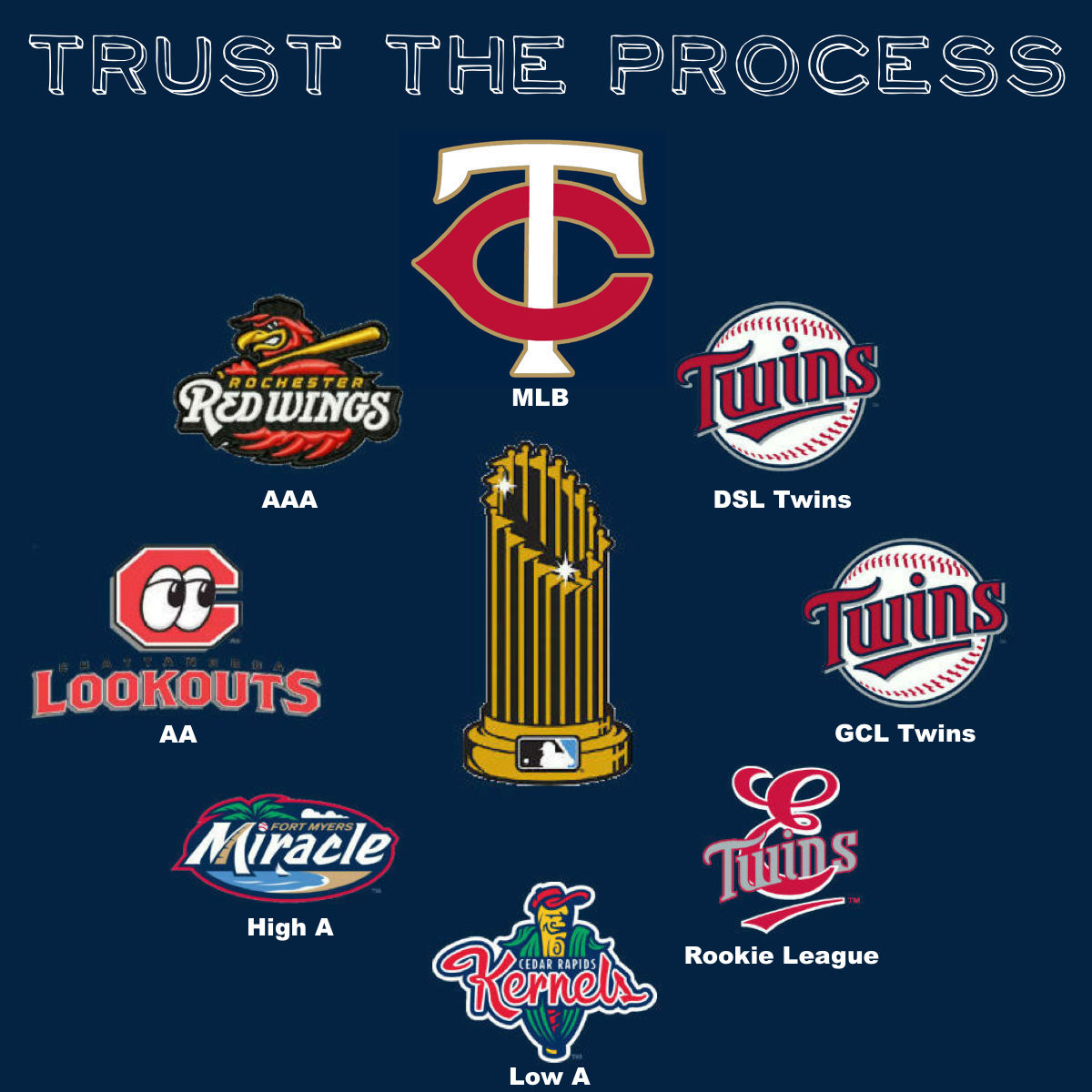 The development of players is how teams succeed and win.

The Minnesota Twins are a team that has to rely on player development. They don’t really have the luxury of using free agency to fix their weaknesses or, at least, to use it very often. They have to trust the process of developing players so they always have good prospects coming. If they do that, those prospects will either help the team by becoming good players for the Minnesota Twins or by being pieces the front office can use to trade for the pieces they need to make this team into a perennial playoff team that can challenge for a championship every season.

This is part 3 of our Trusting the Process series. Please check out part one, simply called Trusting the Process, about how the Twins Front Office and CBO Derek Falvey & Thad Levine helped or let the Minnesota Twins compete this season and why what they did, or didn’t do, at the trade deadline was actually showing how they are trusting the process. Part 2 was about Trusting the Process of Acquiring Players, about what tools are available to every team for acquiring players and how they should use them.

You Have A Lot of Makeup

A lot of people believe there is only one way to develop a player. That way seems to be to promote the player as fast as possible and if they don’t do well, send him back down until he figures it out then promote him again. That would mean as soon as a player shows success at one level, move them up to the next level and if they don’t have success there, move them back down until they figure it out. That might work for robots but these are human beings you’re dealing with and they are all different. They all have a different makeup and a different timeline to how or even if they are going to make it to the big leagues and have success. That is the end goal, be successful in the big leagues, not just to make it there.

That means each player has to be handled differently and knowing their makeup (or how they tick) will help decide how hard they can be pushed. Just think, a player drafted out of high school* who starts in rookie ball will most likely have to progress through 6 levels of baseball to finally make it to the dream of playing Major League Baseball.
*A player drafted out of college will most likely start at a higher level but they’ve also played a few years of a higher level of baseball so they should develop quicker but they will still have around 3-4 levels to climb to get to the majors.

So, 6 times they could be playing really well and get the call that they are being promoted to the next level. Then, each time they get a new level, it’s almost like starting all over again, learning that a new level means they have to get better at every part of the game and all of a sudden, they might not be as good as they thought they were because now they’re in a league with better players.

Basically, they are knocked down 6 times and have to get back up 7 times. That’s if they can stay at that level and battle through the frustrations and slumps they might have to keep from being demoted back down to a lower level again. The bottom line is they have to keep getting back up and that is what separates the players that make it from the players who end up giving up on their dream of being professional baseball players.

The mind (or the lizard brain) is the big hurdle. Getting knocked down by not being able to adapt to a new level will get in their heads and make them think they can’t do it or they aren’t good enough. This is where a player’s makeup comes in. The mind will try to trick them into believing they can’t do it so not only do they have to battle through the physical part of the game but the mental part as well. They have to keep going to practice every day and have the confidence they can do it and keep getting better so they can make the next jump.

This is where teams have to be careful how quickly they promote each and every player. If they promote a player too aggressively without knowing how they’ll react if or when they fail at the higher level, they could destroy that player’s confidence and they might never get it back. This is why there’s no one way to player development.

Plant the Seed and Watch it Grow

A player drafted is a seed planted. Coaching, management and the players playing the game are the sun and water that will allow the seed to grow or die. Every franchise should have the same philosophy across their whole organization of how they are going to grow their players, their teams and their organization as a whole.

They have to keep watering the seed so it will continue to grow. The managers throughout the organization’s minor league teams should be teaching the same way to play the game so the players continue to improve their skills and take them to the next level. If they forget to water the seed or give up on a player for whatever reason, the player’s growth will slow down or even stop.

It could take longer for some players because they may have been learned differently either from a different organization or from where they played in high school or in college. They are moving to different and possibly better soil to improve how well and how fast they grow.

This process involves the front office, management, the coaches and the players. Nobody can be left out. They all have to understand how it works and that it’s a process that won’t happen overnight. If they continue to work at it and trust it, they could make it.

The Great Misconception of D...evelopment

Another misconception is the belief that a player has fully developed or reached a point where they can no longer improve. This is more about older players or players who have made it to the major leagues and have carved out a role within a team or in their careers.

Any player can get better at any age and any point in their career. It might not be a huge improvement but they can improve aspects of their game whether it be physically or mentally. It can come from having a different coach or different teammates or a different team that might give them a different view on their skills or adds something to their game. Nobody is a finished product.

Yogi Berra has a famous quote that goes something like, “Half of this game is 90% mental.” That basically means your mind is a crazy thing and can help you or hurt you in a game. Managers always say they don’t mind (there’s that word again) physical mistakes but the mental mistakes drive them crazy.

It’s that mental half of the game that can be the final hurdle to get a player over the hump to having success in the big leagues. That could be anything from realizing they have to think the game better or that their physical skills are no longer elite so they might have to find different ways to having success. That could be learning to become a pitcher instead of just throwing hard or learning they can’t or shouldn’t try to hit every pitch but focus on the pitches that will give them the best chance of getting a hit.

The brain is a computer. Use it for research and development, not for evaluation. Evaluation should come from your results. A lot of times you can trust evaluation from mentors, coaches, teammates and colleagues but, unfortunately, it’s not foolproof.

In closing, player development is one of the hardest, if not the hardest, parts of building a consistently great team. Every year a team has to make changes. Knowing how to develop players will give them more opportunities of success because free agents and drafted players will know they will have a very good chance of success with them.

Thanks for reading our TwinsTakes on Trusting the Process of Player Development! We’d love to hear your TwinsTakes on the subject! Please comment below or on the posts of this article on Twitter, Facebook, Instagram, or Google+!