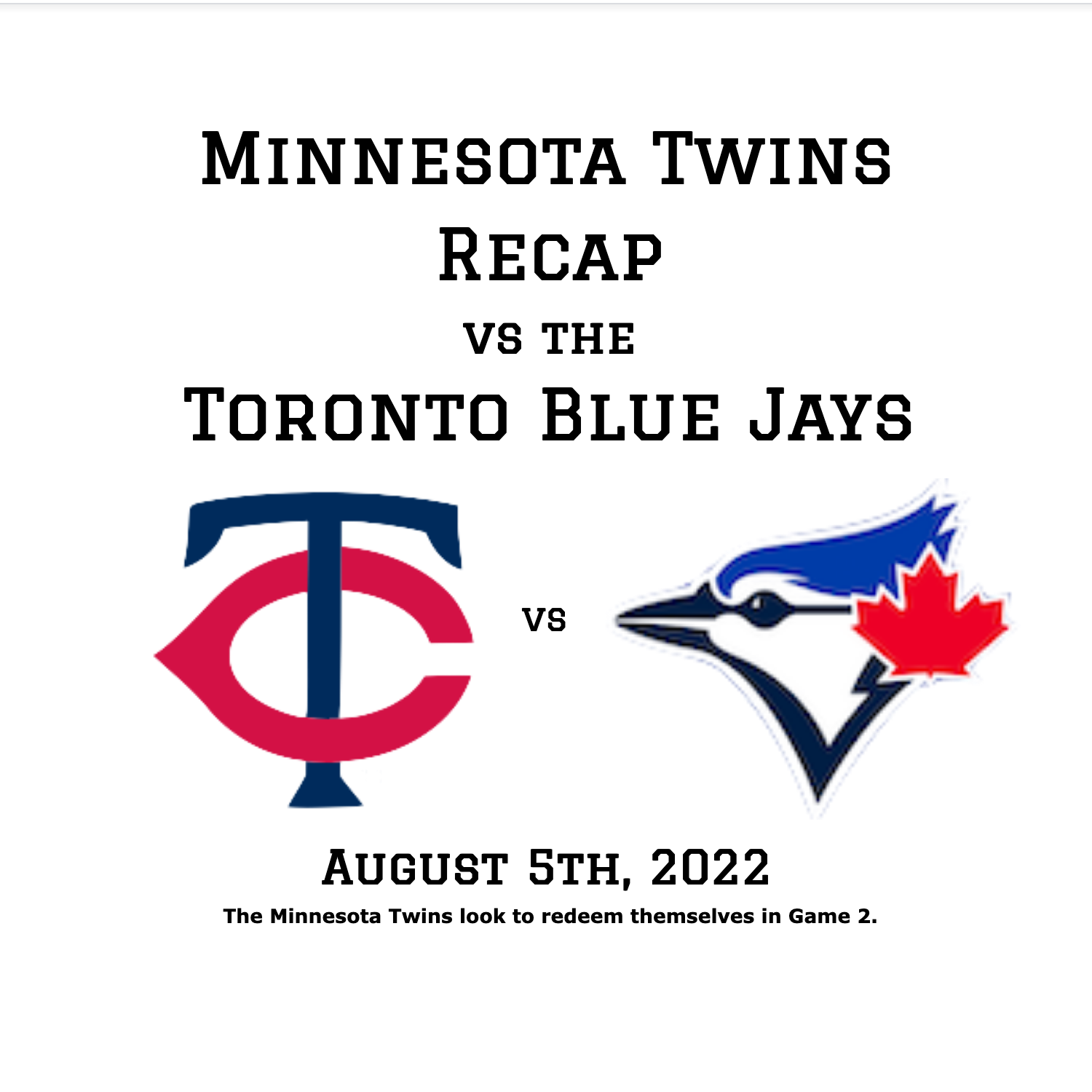 The Minnesota Twins have an exciting matchup in Game 2 as they'll face their former teammate in RHP José Berríos while also seeing their brand new pitcher they acquired on Tuesday in RHP Tyler Mahle. They both have similar numbers so it should be fun to see how this game plays out.

José Berríos has been struggling this season but the last time he faced his former team, he looked like his old stellar self - 7IP 3H 2R/ER 2BB 13K 1HR & his 4th win of the season in a 12-3 shallacking in Toronto.

The Minnesota Twins will also want to rebound from last night's 9-3 loss. 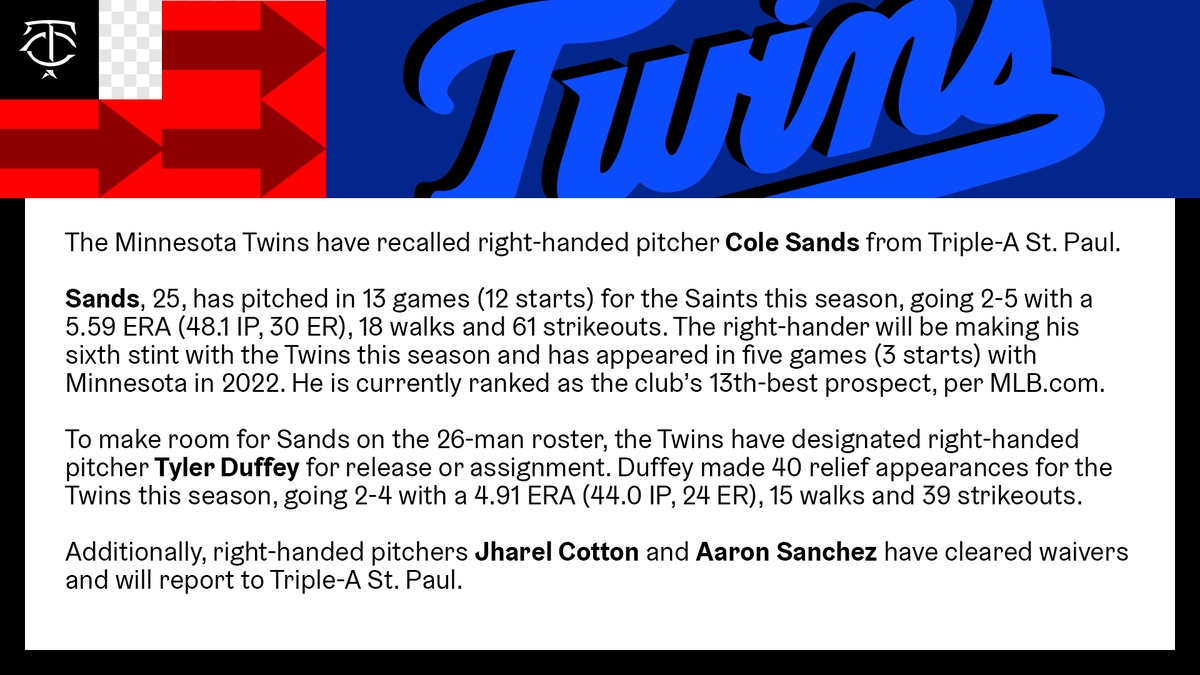 The Minnesota Twins made a couple more moves today and one of them is somewhat shocking, more for who it is than for why, though. RHP Tyler Duffey was Designated For Assignment (DFA) or Release today after spending the last 10 years in the organization and exactly 7 years with the big club when he made his Major League Debut on August 5th, 2012. 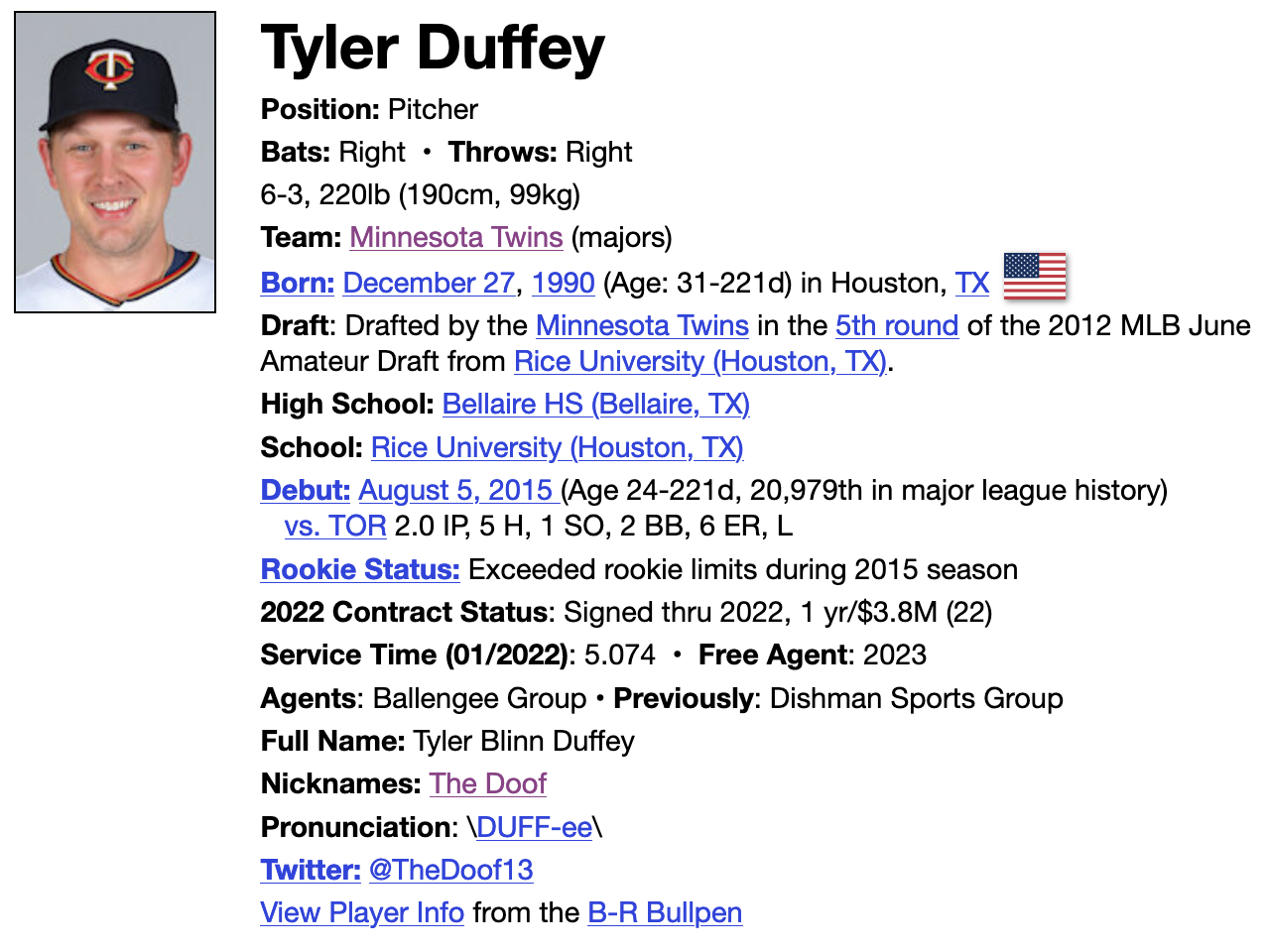 7 Years to the Day from his Major League Debut

It makes sense but it’s still a difficult move since he had turned himself into a very effective reliever since the beginning of the 2019 season. Unfortunately, he’s been far from that this season. He’s lost velocity on his fastball and the control of his nasty curveball hasn’t been there for the majority of the season so hitters were able to sit on that fastball and his curveball was popping up too much so it was likely easy to recognize right away out of his hand. He messed around with a changeup in July but only threw 33 of them even though it really seemed to help keep hitters off their timing. 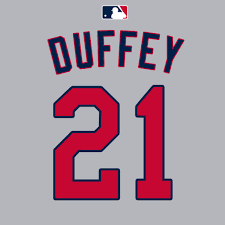 We would assume the Twins would like to see him clear waivers so he could get to St. Paul and be able to get some work in down there to see if he can get back to being a reliable option out of the bullpen.

Here’s how both teams lined up: 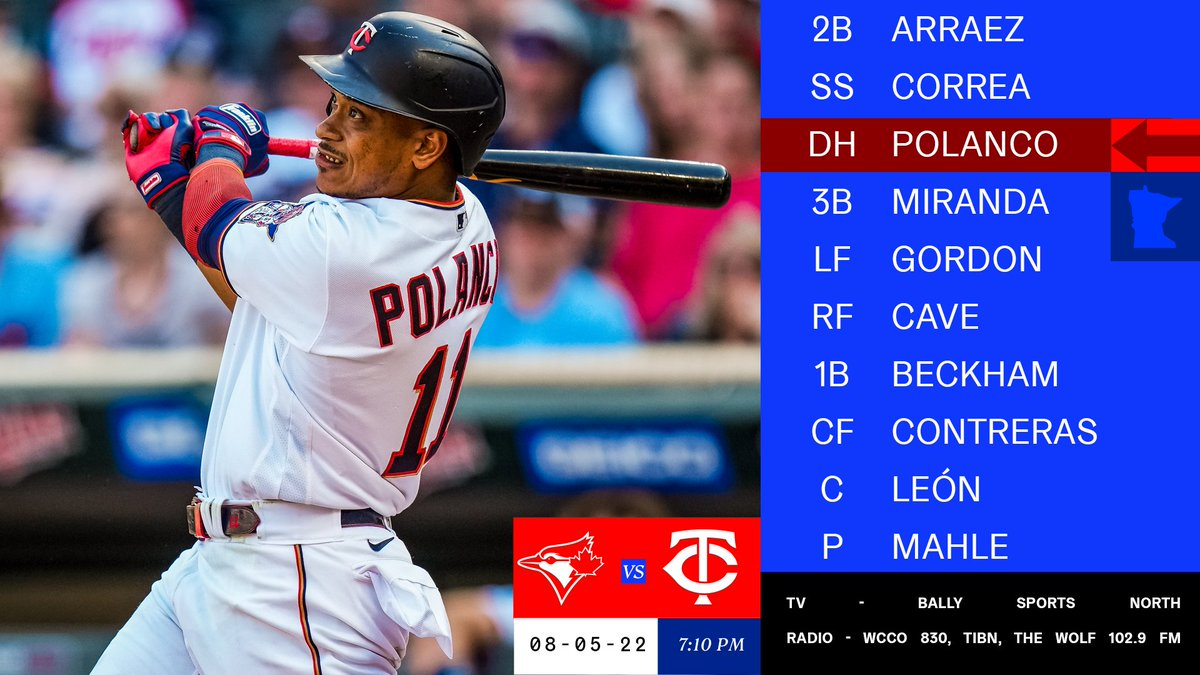 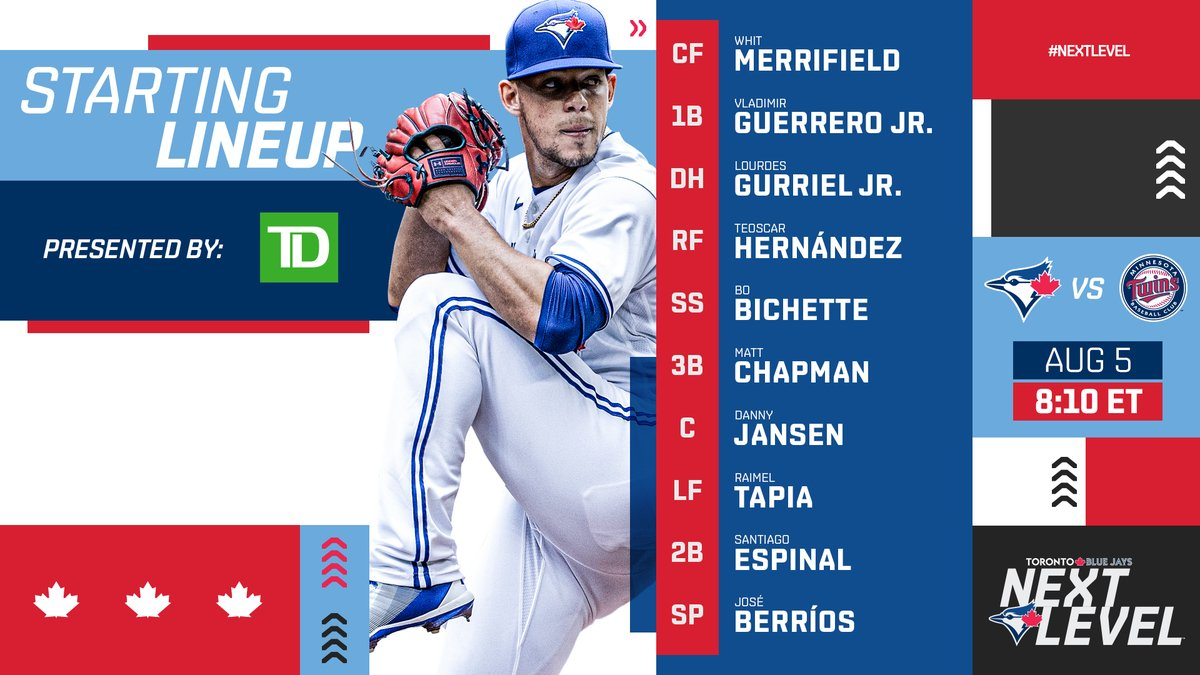 Twins fans didn’t have to wait long to see their newest starting pitcher as it took just 4 pitches for RHP Tyler Mahle to strike out CF Whit Merrifield swinging for his 1st out for his new team. 1B Vladimir Guerrero, Jr. grounded out to short and DH Lourdes Gurriel, Jr. flew out to left field.

Former Twins starting pitcher RHP José Berríos was making his 2nd start at Target Field as an opponent and he started it by setting the Twins down 1-2-3 on 7 pitches as the Twins were looking for that early fastball.

RF Teoscar Hernández led off the 2nd inning with a line drive to right center field for a single, at least. He tried to extend it to a double but CF Mark Contreras was on his horse knowing he might have to try to keep this hit to a single. He got to it, turned and fired a strike to 2nd for the first outfield assist of his MLB career* and Hernández had to settle for a single and a seat on the bench in the dugout. SS Bo Bichette struck out swinging and 3B Matt Chapman flew out to CF to end the top of the 2nd.

The Twins got a 1-out single from LF Nick Gordon but it was quickly taken care of by an inning-ending 4-6-3 double play.

Blue Jays C Danny Jansen walked to lead off the 3rd inning but LF Raimel Tapia grounded into a 5-4-3 double play quickly cleared the bases and Tyler Mahle then struck out 2B Santiago Espinal on a foul tip to end the top of the 3rd inning.

1B Tim Beckham grounded out to 3rd to begin the bottom of the 3rd then CF Mark Contreras, fresh off a great defensive play in the previous half inning, put the Twins in front with his 2nd home run of the season to the bullpen in left center field. Marko Oppo!

Mark Contreras is making you remember his name tonight!

C Sandy León struck out looking and 2B Luis Arraez flew out to left field to end the 3rd.

Mahle set the Blue Jays down 1-2-3 via groundout, strikeout and flyout. The Twins then got a leadoff double from SS Carlos Correa followed by a walk from Jorge Polanco and an RBI-single to center from 3B Jose Miranda (DYKM?) on the very next pitch. A mound visit was then followed by Nick Gordon sending a loud blast to right field for a 3-run shot and his 5th home run of the season on the 1st pitch he saw.

Cave flew out to CF, Beckham singled to deep short for an infield hit, Contreras lined out to CF, León walked  and that was it for José Berríos as the Blue Jays made a pitching change to RHP Trevor Richards. Luis Arraez flew out to left field again to end the 4th inning but what an inning…

A 2-out blast off the bat of Matt Chapman (21) reminded most fans that this game was far from over. The Twins got a 2-out walk but that’s all in the 5th.

The comeback got 1 run closer with a 1-out HR from Santiago Espinal (7). A Whit Merrifield single followed and that brought up Vladimir Guerrero, Jr. and he fouled off the 2nd & 4th pitches, both of them fastballs then he crushed a slider over the center field wall to bring the Jays within 1.

Vlad the Impaler chopped the lead down to 1 run!

Mahle struck out Gurriel, Jr. swinging then got Hernández to line out to center to keep the Minnesota Twins in the lead.

Zach Pop replaced Trevor Richards and Jake Cave greeted him with a base hit to left field but Tim Beckham grounded into a 5-4-3 double play to take all the good feelings away. Contreras then popped out to 3rd to end the 6th.

RHP Griffin Jax replaced Tyler Mahle to pitch the 7th for the Twins.

Tyler Mahle went 6 innings but allowed 3 HRs, all on sliders too high in the zone. Those balls are gone now!

Jax used his slider to strike out the side in the 7th getting Bichette swinging, Chapman looking and Jansen swinging on just 11 pitches. Mow ‘em Down, Griff! I’ll call that Air Force because that sounds good! SLIIIIIDER!

Hey, how ‘bout a stretch between the top & bottom of the 7th inning, huh?

Sandy León then led off the bottom of the 7th with his 2nd double of the season in his 2nd game as a Twin. The Blue Jays replaced Zach Pop with RHP Adam Cimber, a submariner pitcher and Luis Arraez lined out to center. Carlos Correa singled but Sandy León could only advance to 3rd on a slow ground ball through the right side. Jorge Polanco struck out, leaving it up to Jose Miranda to pick him up to help the Twins get an insurance run…

but he flew out to center field to end the 7th.

RHP Jhoan Duran replaced Jax to pitch the 8th for Minnesota and he got Tapia to ground out to short for the 1st out. Toronto pinch-hit Alexandro Kirk for Santiago Espinal. The at-bat started with two straight high heaters at 101 mph. Duran got strike one with another 101 that was taken then he threw a perfect pitch that hit the high outside corner of the zone but was called a ball. Man, that’s frustrating. 3-1 is a whole lot different than 2-2, blue! COME ON! Another heater, this one in the zone at 102.1 mph, was fouled off to make it a full count and Jhoan reared back and threw the next pitch 102.8 mph that was swung through for the 2nd out.

Whit Merrifield took the 1st pitch, also the first non-fastball, for strike 1 then he hit the 2nd one to right field for a single. Guerrero, Jr. came to the plate and singled to right field as well but Duran got Gurriel, Jr. to ground out to 3rd to end the top of the 8th and..

Whit Merrifield moved to 2nd base and Bradley Zimmer replaced Alexandro Kirk, batting 9th and playing center field. RHP David Phelps replaced Adam Cimber. Nick Gordon led off the bottom of the 8th with a ground rule double (15) on the first pitch. Jake Cave flew out to center field and Gordon just bluffed an attempt to advance to 3rd. Tim Beckham struck out swinging on a check swing and Contreras also struck out swinging to send it to the 9th and new closer Jorge López to face Teoscar Hernández, Bo Bichette and Matt Chapman.

Hernández grounded out softly back to the pitcher. Bichette singled through the left side. Chapman flew out to 2nd. Danny Jansen singled to right field on a sharp ground ball. Bichette advanced to 2nd. Down 0-2 in the count, Raimel Tapia fought off an inside sinker to get it to land in short center field to tie the game.

Raimel Tapia ties the game in the 9th!

Whit Merrifield moved back to center field, Cavan Biggio took over at 2nd base and RHP Yimi Garcia replaced David Phelps and Gio Urshela, pinch-hitting for Sandy León, singled to right field and was pinch-run for with Gilberto Celestino. Luis Arraez grounded out to 2nd. Celestino advanced to 2nd but he had to make sure the ball didn’t hit him and it ended up bouncing through his legs. Correa reached on a fielding error by Biggio and Celestino advanced to 3rd. Polanco was intentionally walked. Miranda struck out swinging and Nick Gordon flew out to left field so we have…

FREE BASEBALL!!!
Even if we didn’t want it! DOH!

RHP Michael Fulmer replaced Jorge López to pitch the 10th for the Twins. Biggio started the inning at 2nd base. Whit Merrifield struck out swinging for the 1st out. Guerrero, Jr. got the unintentional intentional walk. Gurriel, Jr. singled to center. Biggio advanced to 3rd because he had to hold up as the hit went over Arraez’s head and he wouldn’t want to get doubled up so the bases were loaded with 1 out. Hernández struck out swinging so it was up to Bichette and…

HE STRUCK OUT LOOKING!!!

RHP Jordan Romano replaced Yimi Garcia to try to keep the game tied against Jake Cave, Tim Beckham and Mark Contreras. Nick Gordon began the inning at 2nd base. Cave was taxed with trying to bunt Gordon over to 3rd. He missed the first pitch. He pulled back on the 2nd & 3rd pitches to make it 1-2. He fouled off the 4th pitch to even the count and he took the 5th pitch to fill the count. He swung through the payoff pitch but it wasn’t caught so Cave took off for 1st base…and Blue Jays C Danny Jansen tried to tag him but he wasn’t close enough so he had to try a lob throw to 1st because he was in foul territory and Cave was between him and Guerrero at 1st base.

Up to the plate came Tim Beckham. He took the first pitch for a ball. Cave took 2nd base but it’s fielder’s indifference since his run didn't matter. On the 2nd pitch, Beckham hit a grounder to 3rd but the contact play was on so Nick Gordon took off for home. Matt Chapman fielded the ball and threw home but the ball hit the ground in front of Jansen making it hard to catch and Nick Gordon slid into home. It looked like he was out but Jansen never had the ball so…

Tim Beckham put the ball in play & the contact play was on...

We made our Game Notes section a separate article