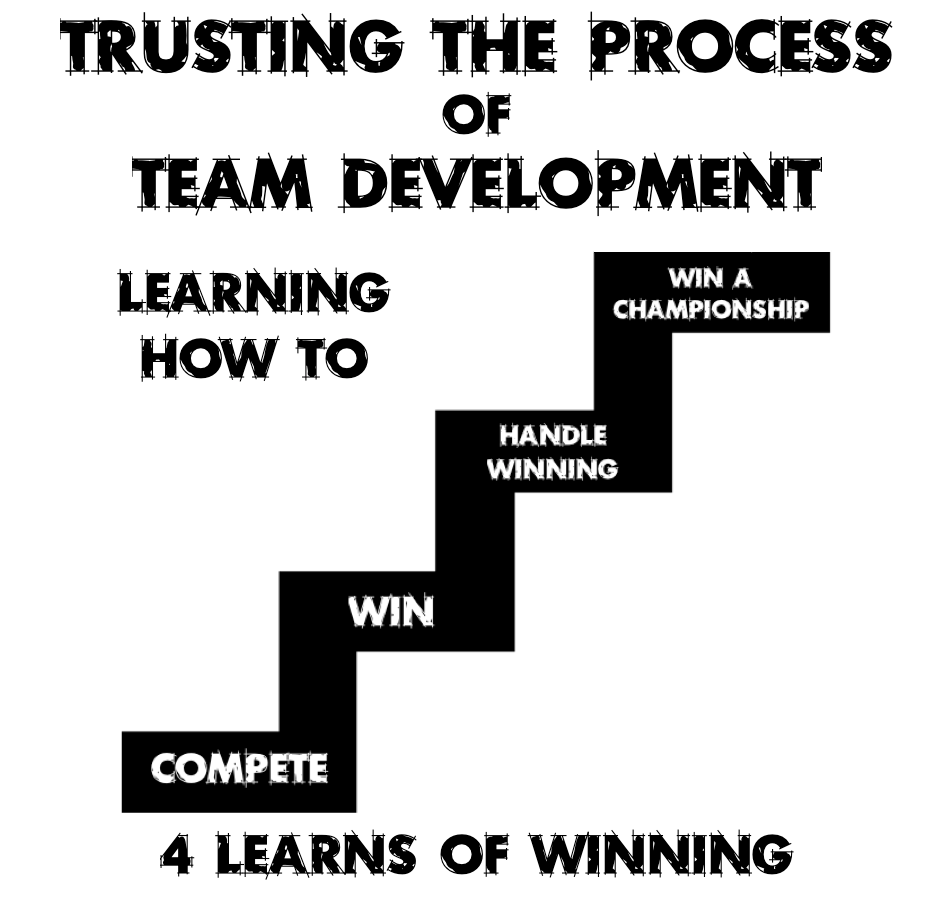 Team development is the final step to building a winning team.

Team development is building your team so they have no weaknesses on or off the field but it’s also building them into a team that knows how to win and also has the confidence that they can win. A team will struggle if they don’t believe they can compete against any team they come up against and when they start to believe they can beat any opponent anywhere, that’s when they’ll start becoming a team to beat.

This is part 4 of our Trusting the Process series. Please check out part one, simply called Trusting the Process, about how the Twins Front Office and CBO Derek Falvey & GM Thad Levine helped or let the 2017 Minnesota Twins compete this season and why what they did, or didn’t do, at the trade deadline was actually showing how they were trusting the process.

Off the field, they will learn what it takes to develop & advance to the next level. They will learn about other off the field skills that go into being a professional baseball player, learning from failing, learning from teammates & opponents (how they play, how they prepare, how they work on their games physically and mentally), using all the tools available to them from video to analytics to working out the right way, and doing any off the field team events, promotions and interviews that come along and how to handle all of it together without allowing one area to mess with another.

A Development Philosophy of how quickly a player will be moved to another level since there is no one way to develop a prospect into a major leaguer should be handled on a player-by-player basis. Each player is different and will have different weaknesses and different strengths. For some of the more gifted players, developing and advancing might be easier while for others, there could be many ups & downs along the way. The key will be knowing how to treat each player’s development.

Some players can be pushed harder than others due to their combination of talent and makeup. Knowing when to leave them at a level when they are struggling rather than demoting them right away can go either way. A player doing really well at one level could very easily struggle after being promoted, doing a number on their confidence. Confidence is a game-changer.

A player without confidence in their game will continue to struggle and start to question if they are good enough to play at a higher level. It has been shown to destroy some players or, at least, set them back. There’s a really fine line between getting a player right back out there the next day to keep at it, sitting them down for a game or two and demoting them to a level where they’ve already been successful. The knowledge of how to handle players in these situations will go a long ways to getting the best out of every player.

Also, they may have to do this, at most, 6 times before having success in the majors with some players starting in the rookie leagues and working there way up through the system. That’s not counting fall or winter leagues, either. It will also take anywhere from 1 to 6 or more years to make it happen. This is why rebuilding a team takes so long and probably why a lot of teams try to tweak their roster by going after some free agents or making some trades to see if they can hang on and still be competitive while their top prospects work their way up. Most of the time it doesn’t work and they would’ve been better off trusting the process but it’s hard to admit your team has to go the way of a rebuild.

A Lot Of Patience

It takes years for an organization to build and develop a consistent winner. If they are rebuilding for whatever reason, a lot of patience will be needed and they will have to stay the course, resisting the urge to take shortcuts along the way. There are not many, if any, shortcuts to rebuilding a team back into a winner. Every aspect of the organization will have to exercise patience. Trying to take any kind of shortcut no matter how small it may appear to be could set the rebuild back weeks, months or even years.

Depending on the reason for a rebuild, an organization will have to take what they already have on their team, figure out where there are weaknesses and strengths and then figure out how to develop the weaknesses into strengths or, at least, to a level where they are no longer a weakness. They will likely have some pieces already in place but, if they’ve been going through hard times, they may have traded their best players for prospects and/or fired the management who may have put them in this situation to begin with. If that’s the case, the rebuilding endeavor may take longer as new management assesses what they currently have to build around and gradually implements a new philosophy.

Every team would love to have a rebuild take as little time as possible but it’s just not that easy. Some of the pieces needed will take a long time to mature into the players they are meant to be. It’s not a guarantee they will ever even get there or be as good as management thought when or if they do reach the major leagues. It doesn’t mean they have to start over as teams should have some prospect depth at each position. It just might take longer.

Core players are the strength of any organization. They are the team’s leaders and they will show the younger players how to be valuable big league players, making them part of that core group. Having core players is probably the biggest and hardest job of building a championship-caliber team. They aren’t easy to find but might be the biggest key to success as they will be there for the long haul and be a huge part of the team’s success for a long time.

MLBTradeRumors.com does a great job reporting MLB news and rumors but they also have articles that explain the rules of transactions, drafts, free agency and pretty much anything that comes to your mind about baseball. Recently, they published a “How They Were Acquired” series for every 2017 MLB playoff team. These articles show how long it has taken some of these teams to reach the playoffs. They also, obviously, show how each player was acquired. It’s pretty cool to look at the more successful teams and see how they’ve built their teams into playoff contenders.

As we said in our Acquiring Players article, teams have to use every tool available to them to acquire the players they’ll need to win a championship. Those tools are the MLB Drafts, International Signings, Trades and Free Agency. Waiver Claims can be included but are not really a major tool of player acquisition. So, the “How They Were Acquired” series of posts on each playoff team are broken down into those categories although they have combined the Draft and International Signings into one category called Homegrown Players.

We broke down each group by team to show how many players were acquired in each category. If you’d like to check that out, just click here for the spreadsheet of the results:
The results were: Homegrown-88, Trades-96, Free Agency-57, Waivers-8; Core Players/Starters - Homegrown-53, Trades-53, FA-30, Waivers-2. For the core pieces, we just went through each team’s list and picked who we believed were the core pieces or the starters for each team.

A belief across a majority of baseball is that building through the draft is the best way to build a team. The results did show that for the most part but we were a little surprised how many players were acquired from trades at 96 with 53 of those players being starters/core players. In a lot of ways, though, some of those players could end up being homegrown since they were acquired as prospects and grew up on their current team’s farm...uhh ...system.
Joe Mauer, from the 2001 Draft, is the oldest homegrown acquisition, Andre Ethier is the oldest trade with a trade from December of 2005 and C.C. Sabathia (2008) & Jayson Werth (2010) are the oldest free agent signings. All of those players are key parts and big reasons why their teams made it to the postseason.

The biggest thing a playoff team has is depth. Every roster spot is taken by a player who will play a big part in that team winning. They will know their role, except it and do it to the best of their ability. There will usually be veterans available at every position or that can at least fill in at every position. If they were rookies at the beginning of the season and they made to the postseason, they are no longer rookies. They were a huge part of their team making it to the dance party and doing some dancing.

Eat Your Wheaties!
The breakfast of champions! Have a bowl...or two.

Winning isn’t easy. There’s no book or class that can show you how to do it. You have to learn how to win from the experience of playing the game. Teams can develop into winners. Mike Zimmer, Head Coach of the Minnesota Vikings, has said multiple times (and we’ve shared this before, too) that there are 4 stages, or learns, to winning. He said:

Obviously, he’s talking about football but it’s not hard to see those stages, levels or learns of winning being used across all sports and working from an individual and/or a team concept. With the right players together, a team can learn together how to win and gradually grow into being a playoff contender then, hopefully, become a championship contender.

This Series is Over!

That’s our series on Trusting the Process. We hope you’ve enjoyed it. We’ll now get into how the Minnesota Twins have done in all areas of Trusting the Process. There has to be a reason why they had such a terrible run from 2010 through 2016. We’ll see where they went wrong and if the new regime will or has improved in that area.

Thanks for reading our TwinsTakes on Trusting the Process of Team Development! We’d love to hear your ‘Takes on the subject! Please comment below or on the posts of this article on Twitter, Facebook, Instagram, or Google+!