3 replies to this topic

There are a handful of franchise records that could be broken in 2018. While you follow the exciting Twins season, you should follow these exciting record chases as well!

Career Hits against Lefties
As Joe Mauer enters his 15th season with the Twins, he is starting to approach some accumulation records. While he’s still 900+ hits away from that franchise record, he is within striking distance of the franchise record of hits against left-handed pitchers. 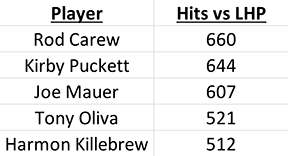 Mauer needs to collect 54 hits against lefties this year to pass Carew’s record mark. While he's had just 40 such hits last year, he’s had 5 seasons in his career with 54+ against southpaws. Unfortunately, the most recent of those seasons came 6 years ago in 2012. Adding to the degree of difficulty, the starting rotations of AL Central opponents expects to be very righty-heavy this year, which could suppress his number of plate appearance against lefties. If Mauer breaks this record in 2018, it will come at the very end of the year, so file this one away for a few months.

Target Field Strikeouts
If you're looking for a record that could be broken early in the year, then look no further (but please do look further, I still have 2 more after this one). Francisco Liriano is the current record-holder for strikeouts at Target Field. His lead, however, is so narrow that he will certainly be passed by at least one Twins pitcher this year, even though he could add to his total by pitching at Target Field when his Detroit Tigers visit Minnesota.

Even if it turns out that Kyle Gibson didn't turn a corner late last year, it won't take much for him to pass up Liriano, as he only needs 4 Ks to do it. If Gibson did turn a corner, then he'll likely take the lead after one start. Ervin Santana is poised to pass Liriano as well assuming he can remain healthy after he returns from his finger injury. As for Santana catching up to Gibson, it would require Gibson to miss most of the year or get traded. Phil Hughes could also pass Liriano with a good season, but surpassing Gibson and Santana would necessitate a BOGO sale at the Springfield Mystery Spot.

Kennys Vargas’ Elite Immobility
All Kennys Vargas has to do to set a franchise record is just stand there. Currently, he is the active MLB leader in games played without a stolen base attempt among non-pitchers. The only player in Twins history with more games played without an attempted steal is former-backup-catcher turned manager turned former-manager Mike Redmond. 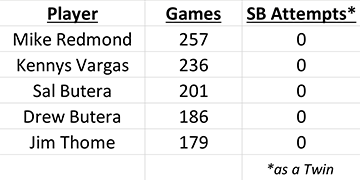 Vargas is just 22 stationary games away from owning this franchise record outright. Unfortunately for him, the addition of Logan Morrison puts his playing time—and roster spot—into question. It does, however, make pinch-hit appearances even more likely if he stays on the team, which would count as games played but would limit his stolen base opportunities. If he remains on the team as a bench bat, expect this record to be his by June, assuming he doesn't screw it up by trying to steal. If he gets designated for assignment or traded, Redmond can light up a cigar in celebration.

Total Bases at Target Field
Target Field-specific records are kind of lame, but total bases, like strikeouts, is a fairly informative stat. Total bases can be used as crude short-hand for “who was good for the longest time”. If you asked the average Twins fan who was good for the longest time since Target Field opened in 2010, they would probably say either Joe Mauer or Brian Dozier, and that’s exactly who sits at the top of this leaderboard.

Dozier needs to net 13 total bases this year to wrest the record away from Mauer. Considering that Dozier had 55 more total bases at home than Mauer last year (during Mauer’s best offensive season in four years), it’s likely that Dozier climbs to the top of this leaderboard by May and doesn’t look back for the rest of 2018. Where these guys fit into the Twins plans going forward will likely dictate who finishes their career with this record on their mantle.

Which record are you most excited to watch for in 2018? Or is there another record that isn't listed here that you'll be keeping an eye on?

I'm really excited for most post-season games won in TF record to be broken by Berrios.

It’s pretty telling that Target Field’s record for strikeouts is held by a guy that called it home for 2 1/2 seasons and that was 5 years ago.

I'm really excited for most post-season games won in TF record to be broken by Berrios.

Ya, I'm guessing the Yankees hold all of the good "Target Field in the post-season" records right now and that is very depressing. Hopefully this is the year that changes!

Also tagged with one or more of these keywords: record, mauer, carew, liriano, history