Some reports are saying Halladay perished in the crash... still awaiting some confirmation...

Some reports are saying Halladay perished in the crash... still awaiting some confirmation...

It's confirmed.Sad, sad day for baseball. 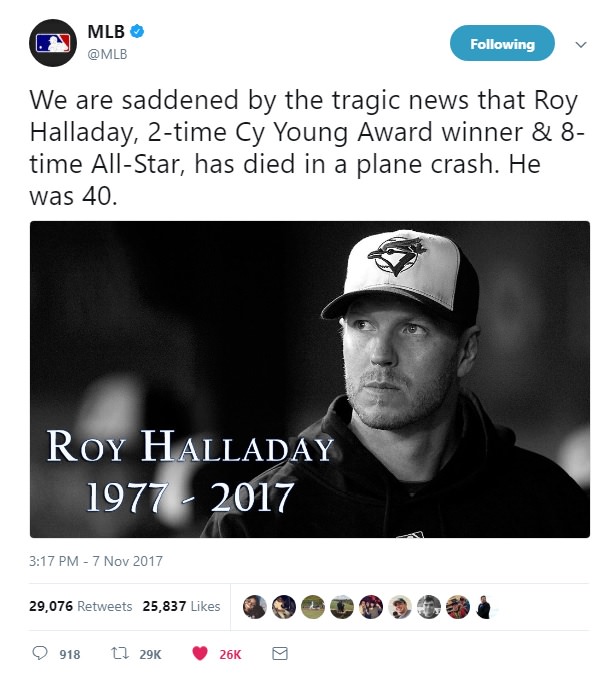 This is terrible, terrible news. A first ballot HOF, I would think. Just so sad.

My favorite pitcher of the past 15 years.

No off-field drama and seemed like a class act on and off the field.

Just sad... Was so good and yet vastly underrated.

It's nice reading all of the kind words from teammates and opponents on twitter... I just hope that - maybe wish that - Halladay knew how respected he was. I wish people were better at saying nice things about people before it's too late.

Sad.My thoughts to his family.

I've shared this a few places this afternoon...

I've had the chance to see Maddux, Smoltz, Pedro, Clemens, and Big Unit all in the prime and at their best from a stadium seat. I've had a chance to see Max Scherzer have a perfect game taken away from him by Jose Tabata's elbow (on my honeymoon, no less). However, I've never seen more exciting pitching than watching Halladay start and Johan come in to relieve Kenny Rogers, I believe, in early 2003 before either had really established himself and were both looking to make their way in the game. He had a special way of approaching his work on the mound that made you want to watch every single pitch, and when I do scouting reports, many guys are in a class of "incomparable" - there's really not another Maddux/Altuve/Pedro, just guys with their physical attributes that will have to hit the 0.00001% that those guys did with those physical attributes to make it - but my incomparable on the mound has always been Halladay. He was unique, and so good at it.

The "positive" on this is that I'm pretty sure it'll end up giving him a bump come HOF voting and we won't have to listen to a debate on that, thankfully.

Purveyor of videobaseballscout.com to cover all kinds of baseball!!

Back to Other Baseball

Also tagged with one or more of these keywords: phillies, blue jays, roy halladay