Minnesota Twins Talk Today, 05:18 AM
Is it time to panic yet?   Of course not! Honestly, after the last three games, I am just as confident in this team being a contende...
›

Minnesota Twins Talk Yesterday, 03:16 PM
There haven't been many yet, but I'll start this today...   The Twins just announced that Zack Littell (hamstring) has been placed o...
›

Baseball Is Back. So Am I.

On March 13 I was covering the Twins in Fort Myers on what would be the last normal day before everything in this world went goofy.

I awoke at the Twins Daily-rented AirBnB, and immediately checked Twitter on my phone as I am wont to do in case I missed something earth shattering in the six hours since I last peeked in. 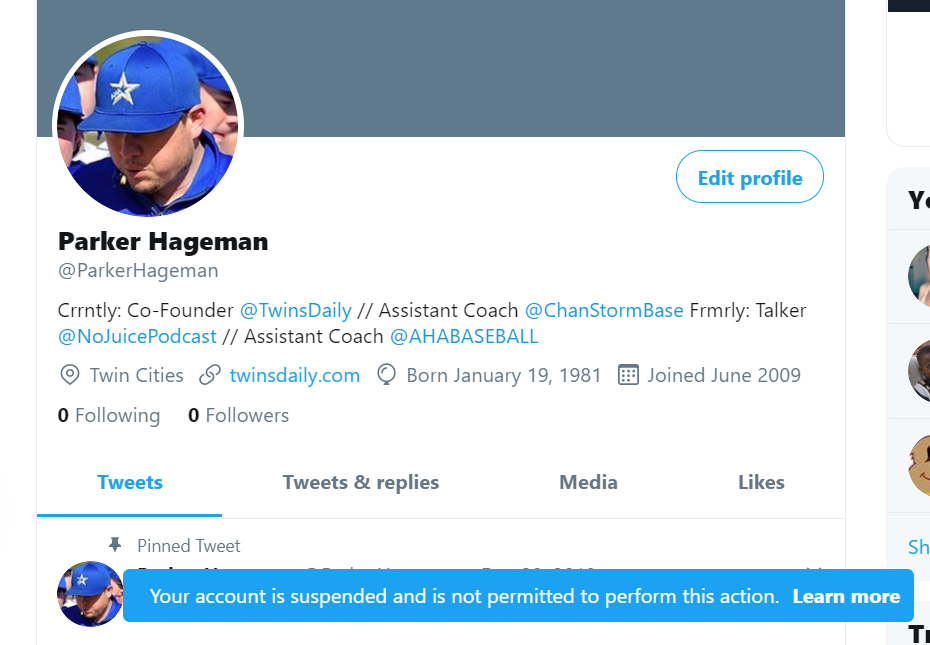 I couldn’t pull down the stream to get that satisfying no-clip-scissor-ride-through-wrapping-paper when refreshing a completely new set of tweets on my feed. I couldn’t get that dopamine rush of seeing that someone liked or retweeted some content I had created. I simply got nothing.

I flipped over to my Gmail and found this. 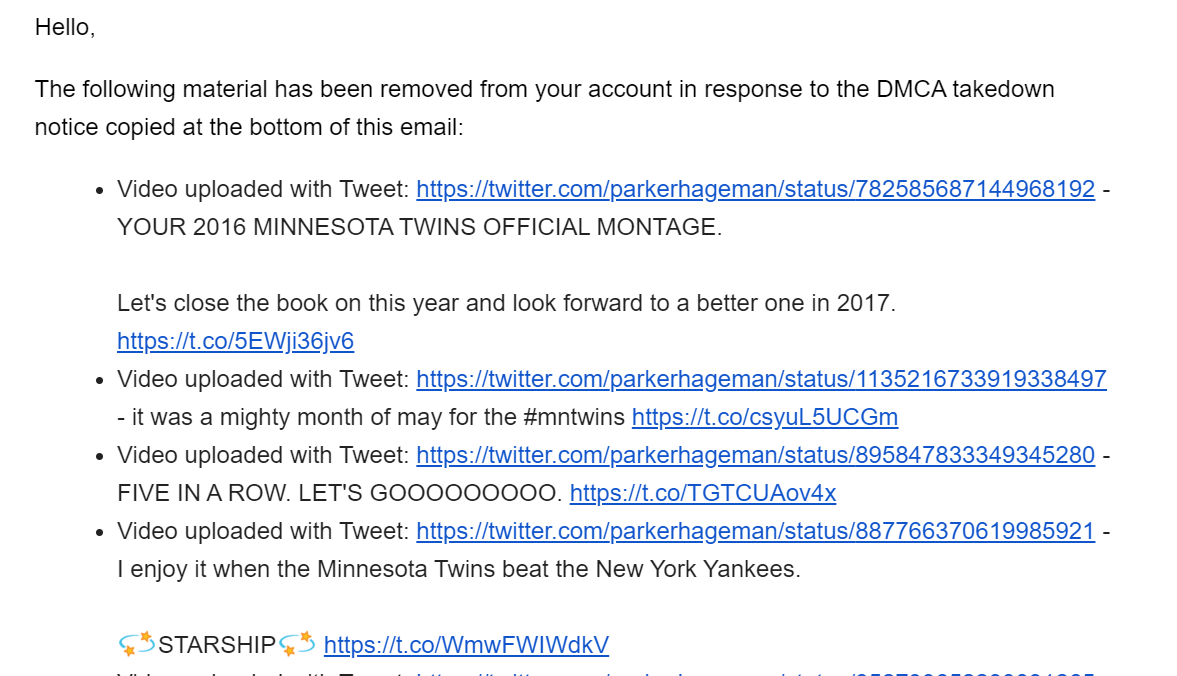 It was a DMCA takedown notice -- removal of video content in which the music was copyrighted, in this case, the song “Nothing's Gonna Stop Us Now” by Starship and owned by Sony Entertainment Group.

I had just moved up my flight to make sure I wasn’t stranded on America’s sweaty jockstrap of an isthmus and now my main portal of information to the outside world was cut.

How did this happen?

I had started by making Vines --a defunct application that featured seven second video clips that loops-- with game highlights set to Starship’s 1987 hit song. It was a nod to the World Series winning team. The bit became somewhat of a localized hit. Soon, people would tweet at me after big victories, asking for their nightly montage.

When the Twins fell flat on their face in 2016, I created a longer lowlight version and it took off. It was a blooper reel set to perfect music for the occasion. A surprising amount of people would thank me for posting them. People affiliated with the team would even reach out. It became an annual tradition.

I didn’t get anything out of it other than smug, self-satisfaction that I had contributed just a little bit of joy to this awful, awful world. Now I was being accused of pirating Starship’s music (ok), using it inappropriately (whatever), and had violated Twitter’s rules (yap).

While covering the Twins in Florida this spring, I read Stephen Witt’s illuminating book on the music industry, How Music Got Free. It documents the rise of mp3s, Napster, iTunes, and VEVO from the 1980s through today. It reads like the Moneyball of music. Highly recommended.

It also helped me understand how we got to the point of suspending accounts like mine.

Long ago, in the 1990s, a music executive named Doug Morris was printing money by selling CDs based on one or two hit songs surrounded by unlistenable garbage. Because we could not wait to listen to “Mmmbop” on the radio, we’d slap down $17 to listen to an entire album of dreck.

But then Napster showed up and saved us. While illegal, it gave the world a better business model than what Morris was providing.

When iTunes and the iPod finally killed CDs, Morris discovered the rising popularity of YouTube and how his grandkids were watching music videos on that site. He then created VEVO, bought a giant catalogue of the music, and in 2007 he sent his lawyers to takedown any videos created using VEVO-owned music.

If you posted a video of yourself baking a cake set to 50 Cent's "In Da Club", it was ripped down. No more sampling the goods. If you wanted to hear a song, you either had to pay or listen on a revenue-generating platform.

Morris is now the chairman of Sony Entertainment Group. The same outfit that owns the rights to Starship’s song. So you can see how that company would aggressively protect its property.

Twitter does not want to run afoul of music’s law dogs like the RIAA or the IFPI -- the enforcement arms of the record companies -- and has a policy that prevents users from posting videos with non-licensed music in it. They even assist in the flagging of potential violators.

But it is not always consistent.

After The Last Dance aired, an account on Twitter was spawned that showed Michael Jordan rocking out to more contemporary tunes. That account has over 52,000 followers and no takedowns or suspensions.

You’ve probably seen numerous videos showing crushing sports moments set to one of the worst songs of all time, Celine Dion’s “My Heart Will Go On”.

One account, @TitanicTD, who affixed the song on top of NFL and college football touchdown highlights, was suspended in early 2020. Perhaps not surprisingly, Celine’s ballad is also property of Sony Entertainment Group.

While I understood the general rules and risks, I had considered my use of the song protected under the Fair Use guidelines on Twitter.

I used a portion of the song, not reposted the entirety. There was no monetary gain for the video, it was non-commercial. I wasn’t attempting to claim ownership.

In my mind I was giving life to a lifeless song that was over thirty years old. If I had the ability to access Spotify’s data, I would bet since I began posting the tribute videos, that song’s streaming numbers on the music app probably jumped by the tens. (THE TENS!)

The Fair Use act is definitely something that is difficult to argue as it is almost completely subjective and open for interpretation. For some reason I figured Twitter would understand my position. At the very least, I figured they would ask me to delete the video, not suspend my account for months.

And there is some legal context for it.

In 2008 Universal Music Group, then headed by the aforementioned Morris, issued a DMCA takedown to YouTube for the video of a 13-month-old dancing around to Prince’s “Let’s Go Crazy”.

The 13-month-old’s mother and video’s creator, Stephanie Lenz, responded to YouTube citing Fair Use and YouTube reinstated the video. Lenz then sued Universal for misrepresentation under the DMCA, hoping to set a precedent against companies going after videos like hers. Ultimately the courts ruled in Lenz’s favor but as the case ascended to higher courts, the two parties eventually settled when the Supreme Court declined to hear the case.

Lenz’s video remains posted on YouTube. But even now Twitter users regularly receive DMCA takedowns for videos where music is inadvertently captured in the background at events or weddings. Two months after my suspension, the Star Tribune’s Michael Rand had one of his tweets flagged.


Twitter, however, is cowing to the International Federation of Phonographic Industry (IFPI) and has been aggressively botting users’ feeds to find anything that can be construed as stolen music. According to one article, Twitter’s system has failed to decipher between which music videos are Fair Use and which are actual copyright violations. And numerous users, like Randball above, in early 2020 received temporary suspensions over perceived violations.

Over the next few weeks I sent multiple emails to the Twitter copyright department, Twitter itself, and even to Greame Grant, IFPI’s Director of Anti-Piracy. I explained myself, my motivations and said I would never do something so egregious as providing their client with free advertisement again. The only thing I didn’t do was drive to the nearest rural casino to catch Starship on tour and beg the band for forgiveness.

I did not receive one response beside the form email Twitter sends out encouraging violators to reach out to the copyright submitter -- in this case IFPI -- in hopes of getting them to retract the takedown request.

I was frustrated at the platform. The lack of response. The lack of consistency in punishment. I didn’t want to come back, not until my original account was freed. I did not want to give Twitter the satisfaction of having to rebrand and regrow. Since joining that hot steaming mess in June 2009 I have built a good following, a good brand and even better contacts (one of the worst parts about being suspended is that you cannot access your DMs or followers lists).

That’s why I didn’t start tweeting from a new account right away.

Truthfully, given the state of the country and the on-going battle with the coronavirus, I don’t have the utmost confidence that baseball will actually be played come the end of the month. That being said, since the game is moving forward for now and there is some honest-to-goodness baseball happening at Target Field, I’ve come out of the shadows from my other account.

So, Parker Hageman is still alive.

The morass that is the copyright laws. Being in the music industry, all I can say is 'Ugh!' and 'I feel for you!' It's all about who they think they can get away with punishing, fining and extracting money out of. Well, okay, I do think artists are entitled to make money from their own music, and they deserve the protection of misuse and free shares, but some of them lose their own copyrights to those with more money. So, even if you could beg forgiveness and permission from the band, they may not even have control over their own copyrights anymore. Too bad you don't have a direct connection to them to ask, but it would still end up being a licensing mess because someone somewhere would make it so. In the end, I think posting to YouTube is an easier process. (I could be wrong about this, but have some kind of vague recollection about a conference session I attended 4 years ago that discussed streaming options and various platforms.)

The rumors of your demise were greatly exaggerated! Or so it seems? Btw, I learned more about the music licensing business in your OP than I ever did.

Welcome back! We are ready to hear baseball from you! They should have paid you for promoting their song instead of penalizing you. Go figure