Twins Notebook 8/15: Let’s Play 1.556!
by Tom Froemming
The 5 Best Bets to Win Twins MVP
by Nash Walker
Twins Notebook 8/14: Twins Return Home to Get R...
by Andrew Thares
Byron Buxton’s Aggressive Approach at the Plate...
by Patrick Wozniak
Twins Ponder Further Efforts to Protect Byron B...
by RandBalls Stu
The Only Trade The Twins Need to Consider Befor...
by renabanena

Minnesota Twins Talk Today, 06:40 AM
An interesting tidbit. We all know that walks aren't entirely indicative of plate discipline, but Rosario's new approach is startling whe...
›

Musings and "Analysis" on a Deck of Cards 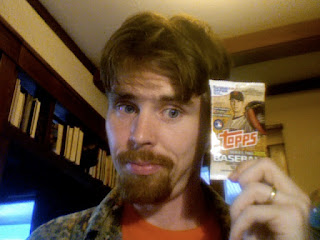 That New Pack Smell
Every year, I treat myself to one pack of baseball cards. I've always enjoyed recapturing the glee, the confusion and the memories of stale bubble gum.

This year, with the Twins careening below .500, it seems that plenty of fans would appreciate a diversion like this, but, as a curious soul, I wondered. Would the Twins be any better, if I replaced players on the team with those individuals in my particular deck of cards? Or, put another way, is the Twins Front Office any better at assembling talent than a random machine at the Topps factory?

The results, both of my nostalgia and my exercise in Random GMing are as follows. 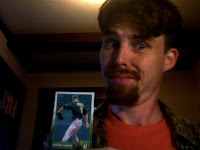 Really? Parker?
I always trick myself into thinking the top card will be someone of magic and wonder, someone to trick you into saying: YES! BEST PACK EVER!!...This year's magic man...Jarrod Parker...a good pitcher coming back from elbow surgery...oh boy...this might be more trying than one of Mike Pelfry's starts.

Jose Lobaton (Catcher of the Washington Nationals) follows...Lobaton is fun to say, but I might prefer Loba-tron: Android Catcher of the Future. 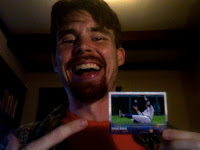 It's funny because he's a Tiger.
Cody Ross of the Diamondbacks might be the most stereotypical Millenial suburban baseball boy name ever...but he was actually born in 1980 so he squeaks into the avant garde of Gen X suburban baseball names and the pack's determined outfield partner would be Rajai Davis, who is shown missing a catch...c'mon Topps, that's just mean!

Oh boy, it's the middle of the pack time, hitting the role players, fringe prospects and journeymen part of the deck: Wily Peralta from the Brewers, Robbie Grossman from the Astros, and Robinson Chirinos of the Texas Rangers. These are all guys I could sit next to on a flight to New Delhi and never know they were major league baseball players (assuming they would A: fly to New Delhi and B: Fly coach) 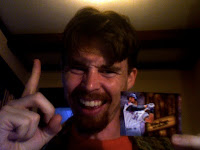 Ahh, memories of Mike Piazza
Oh! We've got a throwback card! (Also known as fan service for the aging buyers of baseball cards) It's Mike Piazza from his Mets days. Side note: I was a big Piazza buff during my teenage years when the Mets were easier to see on Montanan TV than the Twins. I look forward to his induction in the Hall of Fame, even though I never actually did see him play live.

Woah, it's time for some quality here at the end of the deck: Stephen Vogt (A's Catcher, and three pitchers who had strong seasons recently: Stephen Strasburg, Jhoulys Chacin, and Hisashi Iwakuma). Clearly my assumptions about the top of the pack being magical need to be re-evaluated. That might actually be the cleverer marketing ploy: save the best for last and convince the kids to go buy more...I'm on to you Topps, you and your diabolical machinations!!

***
PART THE SECOND: "ANALYSIS"
HERE BE HEARSAY AND CONJECTURE, BE YE WARNED
***

So The Topps Pack of 12 contains 0 Infielders, 3 catchers (not counting Piazza), 3 Outfielders and 5 pitchers (all starters). So how would that do at replacing Twins players?

In an unscientific study using baseball-reference's WAR so far this season (and a selection of Twins players who have logged most of the time in the line up, here's where the Twins players* (see note 1) stand.
Starters: Suzuki/Mauer/Dozier/Plouffe/Santana/Rosario/Hicks/Sano
Bench: Nunez/Escobar/Hermann/Robinson
Line up Total (6.9)
Starting Pitchers: Hughes/Gibson/Pelfry/Milone/Santana
Relievers:Thompson/Duensing/Graham/Fein/Boyer/May/Perkins
Pitching Staff Total (11.2)
Twins Total: 18.1 WAR

After that I hunted down the year for those players in this pack to see how they compare. Obviously I couldn't I didn't just want to replace bad players with someone better (any team is better if they choose better players), rather I wanted to see how the Twins could be expected to do if they brought in all 12 of these guys to replace others at similar positions (i.e. Starters, Catchers, and outfielders)

The key take away, other than that my initial reaction to pitchers is based much more on name recognition than performance this year, has to be that despite even the worst outings of late for Twins pitchers, over the season, it's WAY better to have the devil we know than the devil we don't 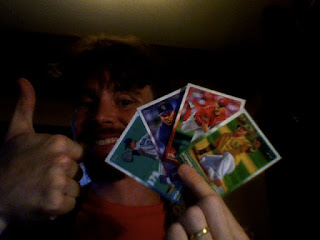 Maybe my initial pleasure with these pitchers was ill founded...

If we acknowledge that Terry Ryan can build a rotation better than a completely random player generator, how about the line up?

Clearly the outfield is hurt by that set of swaps, but shockingly (or unshockingly I suppose) any combination of these three random catchers would all outperform the Suzuki/Hermann Tandem with room left over for a third catcher and a couple of days of Vogt spelling Mauer at first base...heck Chorinos even has starts at 3rd on his resume.

All told, if the Twins let a random pack of trading cards determine half their line up, they would be significantly worse than they are: 18.1 Team WAR to 12.6 Team WAR.

I won't use this as some asinine proof that the Twins are secret geniuses, but at the very least, I won't tweet out some claim that monkeys at typewriters could bang out a better roster than the front office.

*Note 1: A case could be made that I should have used some different players who either played better (i.e. drop Santana and include Vargas instead) or worse (i.e. Drop Santana for Nolasco), but like my warning says, it's hearsay and conjecture, stick with me guys.

#Note 2: I suppose you could quibble and say that I should have removed Hunter for Davis and kept Hicks, or dropped Santana instead of Nunez for the third catcher, but whatever way you do it, the gain of 1-3 Wins above Replacement isn't enough to offset for the dismal pitching changes. And besides that: HEARSAY! CONJECTURE! Smarter writers will have better reasons, I'm just a shmuck who opens trading cards and writes about it.