Minnesota Twins Talk Today, 06:50 AM
Money started working as Square money lication before rebranding. It is a shared installment administration that was created by their par...
›

Minnesota Twins Talk Today, 06:50 AM
Money started working as Square money lication before rebranding. It is a shared installment administration that was created by their par...
›

Minnesota Twins Talk Today, 06:50 AM
She left for the Twin Cities in 2007, eventually rising to the No. 2 position in the St. Paul school system. She is currently the executi...
›

trade deadline mariners aaron hicks byron buxton cliff lee
For the first time in 5 years the Twins are buyers at the deadline, and with the Mariners in town and the Twitter fanbase on fire, I thought it would be fun to to look back at the last big Twins trade that never happened and imagine what it would be like if the Twins had acquired Cliff Lee from the Mariners 5 years ago.

Note: this is a work of fiction, not a genuine attempt at analyzing impacts...I'm not that smart, I'm just a weird guy who likes Alternate History

When the Rangers refuse to part with Justin Smoak, the Twins acquire Cliff Lee for Wilson Ramos, Aaron Hicks, Kyle Gibson and Anthony Slama. Minnesota fans rejoice so much that no one notices that Justin Morneau remains sidelined after a collision in Toronto

Without any more trade chips, the Twins go without a proven closer, despite tempting overtures about emerging Nats closer Matt Capps, trusting John Rauch to save the day, or failing that...Cliff Lee on his off days

The Twins clinch the AL Central with 12 games to spare, allowing manager Ron Gardenhire to set up his rotation for a matchup with either the Yankees or Rays in the first round. "Cliffy has done real good up here...so he might just be our game 1 starter" says Gardy. "Doi!!!" say Twins fans.

The Twins finally break their Yankee he'd after Cliff Lee wins Game 5 at Target Field with a 1 run shutout. Says Lee, "it was a bit rough (with the bullpen nearly blowing Liriano's game 2 lead) but we got there in the end, good thing Glen (Perkins) came in in the 8th, you know...he could make a good set up man."

Backed by the home run power of Jim Thome, Delmon Young and Danny Valencia, the Twins need only 5 games to beat the Rangers in Arlington and advance to the World Series against the Giants. Asked if he's worried about Cliff Lee's workload, manager Rob Gardenhire replies, "work what now?"

Twins lose the World Series to the Giants in 5 games, but remain upbeat. "Obviously we would rather have the trophy, but we'll back and loaded next year, that's for sure" pledges Lee. 
12/14/10
Cliff Lee jilts Minnesota to re-sign with the Philadelphia Phillies. "I never wanted to leave in the first place," says Lee, "obviously it was nice to help Minnesota, but Philadelphia is where my heart lies." Undeterred, General Manager Bill Smith seeks to lock down the squad that brought Minnesota their first AL Pennant in nearly 20 years giving extensions to JJ Hardy (through 2014), Delmon Young (through 2015), and Francisco Liriano (through 2014) and re-signs Jim Thome. 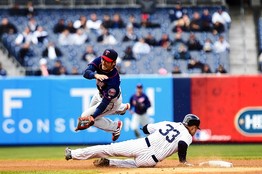 Shame we lost Hardy on this take out slide
Disaster strikes as Nick Swisher slides into second base breaking JJ Hardy's fibula. Manager Ron Gardenhire quickly installs Tsuyoshi Nishioka as the new starting shortstop. A quick RBI triple and lunging grab to his left causes the fan base to erupt with joy as the Twins take a series in Yankee stadium. One fan goes so far as to get a "Nishioka Forever" tattoo.


8/15/11
The Twins have the highlight of their year when Jim Thome hits his 500th Home Run. It's Thome's last before he returns to Cleveland for one final playoff run with his first team. Meanwhile the double play combination of Hardy and Nishioka (or Thunder and Lightning as fans have taken to calling them) offer a ray of hope to compensate for the regression of Danny Valencia and Delmon Young (despite peripheral stats that suggest Nishioka isn't quite as good as his rookie year attests). The team finishes with a 69-93 record, which will give them the fourth pick in the 2012 draft, their highest in a decade.


12/14/11
With a lot of money tied up in other extensions the Twins face a difficult decision between keeping beloved reliever Joe Nathan, former top prospect Jason Kubel, or right fielder Michael Cuddyer who had paced the offense while Morneau and Mauer worked to make a come back. Citing the need for a "proven closer" the Twins resign Nathan (for 3 years), and Kubel (for 2 years). "This year was an anomaly," says Smith who was given a full vote of confidence by ownership, "I don't expect us to have a year like that again, and I'm sure the players don't either."

Hours after a drunken Delmon Young's anti-semitic tirade in New York and subsequent suspension ("We won't tolerate that" says Jim Pohlad), call-up Ben Revere stuns the crowd with a great leaping catch in left field. Fans who hope a return to the Bronx will remind a struggling Nishioka of his strong April are disappointed when he airmails two throws into the Yankees dugout. Rochester infielder Brian Dozier packs his bags.

With the #4 Pick in the MLB Draft the Twins select
Mike Zunino thereby solving all catching problems
ever...
The Twins end their connection with ALCS hero Danny Valencia by trading him through waivers to the Red Sox. "It's part of the game," explained Manager Ron Gardenhire, "Danny gave us a lot over two years ago, I'm sure he'll give his best in Boston." Some fans, frustrated with the inconsistency of Francisco Liriano, had hoped that the former ace in the making and the big third baseman could bring in significant pitching prospects are left wanting. But many have now turned their attention to the Twins top draft choice: Florida Catcher Mike Zunino ("hey, look at what happened the last time they took a catcher in the top 5...maybe this one won't even get bilateral leg weakness!")


11/29/2012
Citing their "complete confidence" in Ben Revere the Twins trade Denard Span to the Nationals for Vance Worley and Trevor May. Revere's diving catches and ear-to-ear smile become the face of the Twins.

12/6/2012
The Twins shockingly trade their second outfielder in a week, when the Tigers offer the Twins a random relief prospect to take Delmon Young off our hands, who they think is just the veteran bat they need to finally win the World Series. "THANK YOU, THANK YOU, THANK YOU, THANK YOU" shout Twins fans. A small group of fans chant the same words at Tsyuoshi Nishioka's Air Japan flight back home at the completion of his contract.

2/1/2013
GM Bill Smith gushes about the team's newly revamped pitching staff: "We know that Perkins, Burton and Nathan can do what we need at the end of the game, but we needed pitchers who could get the leads there. I think we have a very deep rotation, Scott [Diamond] took a big step forward, we know what Francisco [Liriano] is capable of, and now with veteran arms like Kevin Correia and Mike Pelfry we have what we need to compete."

For the first time in over a decade the Twins are never close to contention, due in large part to complete implosions in the starting rotation. The team decides to sell off many of their veteran assets at the trade deadline: Morneau and Liriano head to the Pirates, JJ Hardy goes to the Diamondbacks, Jason Kubel goes to the Cleveland Indians on a short rental. "I guess we're really rebuilding," writes one Twins Daily blogger, "good thing Mauer's locked in at Catcher."

8/19/13
Joe Mauer sustains a concussion during a make up game against the New York Mets that spells the end of his catching career, and top prospect Mike Zunino struggles a bit when called up to split time with Drew Butera as his replacement. The only shocking silver linings in another disappointing season (66 - 96) are the sudden burst of power from second baseman Brian Dozier, says team closer Joe Nathan, "he's the real deal."

Bill Smith steps down as General Manager admitting, "yeah...I can't believe I lasted this long either," the Twins take the unusual step of inviting back former GM Terry Ryan to replace him. "It's time to turn the page and build from within," says Ryan before looking at a farm system that boasts Miguel Sano, Mike Zunino, Second Baseman Eddie Rosario, and not much else. "Well, crap..." says Ryan afterwards.


12/6/13
The Twins welcome new starting pitchers, Ricky Nolasco and Phil Hughes at a press conference. On the emerging slew of podcasts, one Twins follower says: "Obviously we'd like to have our own pitchers come up through the minors, but besides [Trevor] May at Double A, our best options are the kid we got for not resigning Cuddyer [Berrios], and Kohl Stewart. So they're all a ways away."

3/22/14
With uncertainty around the aging familiar stars and the unknown new signings, The Twins turn to young talent to highlight their ad campaign, "Bringing Smiles back to Twins Territory". The ads mostly consist of Ben Revere and Brian Dozier smiling brightly at the camera saying, "please come back...please...? You're a very attractive person...I'd like to see you at the ballpark...Please?"

7/15/14
While some stat heads argue that Twins Closer Joe Nathan had been outperformed by set up man Glen Perkins, Nathan is the one player chosen to represent the Twins at their home town all star game. Though he loads the bases, he does deliver a final strike out to lone Rangers representative Kurt Suzuki. "God, he'd be better than Butera and Zunino" carps one Twins fan.

9/25/14
The Twins near the end of their 4th straight 90 loss season despite an all-time record Strike out to walk ratio for new starter Phil Hughes. In their final home game the team stages a moving tribute to Joe Nathan, who, after giving up the closer spot in September to Glen Perkins, gets one last 9th inning against the Arizona Diamondbacks. After the game Nathan says "wait...why didn't I get the Mariano Rivera farewell tour?...screw it! I'm coming back next year!"

12/3/14
Torii Hunter joins the Twins for one final season despite the offer to complete a new soul patrol in Seattle with Aaron Hicks and top prospect Byron Buxton.


4/3/15
New signee Ervin Santana is suspended for 80 games for testing positive for a performance enhancing drug. Rookie Trevor May is added to the rotation behind Mike Pelfry. "Would have been nice to see a little competition for that spot," says Terry Ryan, "but we like the guys we have."

7/31/15
At the trade deadline the surprisingly contending Twins seem in desperate need of a shortstop (as no one has compared to Hardy and Nishioka), catcher (to replace Butera as the struggling Zunino goes back to AAA) and in the bullpen. Terry Ryan delivers only Tampa Bay Reliever Kevin Jepsen to complement Glen Perkins setting up for Joe Nathan, at the cost of starter prospect Chih Wei Hui. Fans demand a more meaningful move, like the one that got them Cliff Lee 5 years ago.