Minnesota Twins Talk Yesterday, 09:42 PM
The world of sports has changed over the years. As a result, leagues have adapted roster sizes to allow for more active players, reserve...
›

Other Baseball Yesterday, 06:41 PM
Free agency is likely going to be a really slow burn this year, but I still think it's worth having a thread to discuss signings. ...
›

Minnesota Twins Talk Yesterday, 02:48 PM
Since the beginning there was a lot of FA talk surrounding Jake &thattherewas a lot of interest from various teams. Thought he'd be g...
›

Other Baseball Yesterday, 02:13 PM
With spring training in full swing, who are the favorites in the A.L.?15. Baltimore OriolesBetOnline O/U - 63.5 winsThe Orioles are bruta...
›

terry ryan roster trades mike pelfry
Many of you may be looking at the Twins roster for opening day and wondering: "where the hell are the prospects?"

Sure, we've been told again and again that we're about to get a huge influx of talent. And sure, we've been told that the children are our future. But the young players coming north: Danny Santana, Kennys Vargas, Oswaldo Arcia, Kyle Gibson...we've seen them all before...and the people we haven't seen: Blaine Boyer? Kurt Suzuki? Tim Stauffer? Are not the world changing prospects we've been asked to bank on.

We at Peanuts from Heaven have found a secret ad written, directed and produced by Terry Ryan. What follows is a transcript of that ad. 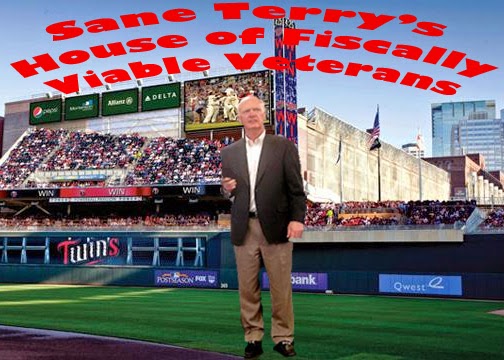 SANE TERRY. For years, the Minnesota Twins have been giving the aging and seemingly ineffective baseball players of America a chance to hit rock bottom. Once they do that, they are ripe for the picking...your picking.

SANE TERRY. Are you a team with six valid starting pitchers? Why not trade for one of our many rotation candidates as insurance in case of injury, theft, or spontaneous combustion?

SANE TERRY. Are you a team who wishes their young players could learn from a cautionary example? Why not trade for one of our jaded-former-prospects whose shattered dreams has left them a shell of their former selves?

SANE TERRY. You can get all your valuable veterans for low, low prices. Just ask these satisfied customers.

HUNTINGTON. Our team used to be a joke, but once we just started picking Terry's discarded pitchers off the scrap heap, we had all the support we could ever need!


[Cut to Buck Showalter at the dugout railing of Camden Yards]
SHOWALTER. If someone has "former-Twin" on their resume, you can bet that they'll be a below-average starter, but an irrationally great resource for your post season run! Thanks to Sane Terry, I might not be fired right before my team wins the World Series!

[Cut to Sane Terry reclining in his office at Target Field, the camera takes in a view of the field]
SANE TERRY. We know you can get brand new ballplayers from many sources. But Crazy Billy's Coliseum of Deals always seems to have ulterior motives, and the next Miami Marlins Fire Sale isn't scheduled until November 2016, so why not come on down to Sane Terry's House of Fiscally Viable Veterans and see what we have on offer?

[Cut to, reverse Angle, the camera takes in a view of the hallway]
SANE TERRY. You don't have to give up the farm, just a young kid with upside, or downside, or cash...we like cash. And we like to give these veteran ball players a new lease on life. That's why we'll always have them on the roster, and always have them available, because that's what made us successful all these years.

ANONYMOUS INTERN [While walking by Terry's door]. Huh? What do you mean? We haven't been successful. And the older players rarely if ever help us. And when we trade them we almost never get anything of value.

SANE TERRY. Well, you know what they say, "the definition of sanity is doing the same thing over and over again expecting a different result."

ANONYMOUS INTERN. Actually I think that's the definition of insanity.

SANE TERRY. Ha. Ha. If that were true, I would be Crazy Terry...and I am clearly Sane Terry. It says so on this ad.

ANONYMOUS INTERN. What ad? And who are you talking to?

SANE TERRY. Sane Terry's House of Fiscally Viable Veterans. Call now and get Mike Pelfry right before he finalizes his deal with the devil for one more good season.

And the Toronto GM "I have to grab any waiver guys before anyone else, because, well...you know Terry!":

And the Colorado GM "You can even grab guys who are good, because who wants to play for a buck when you can get two!"

I understand that to a certain extent this is satirical, but it also is a common complaint. It's understandable to crave the top notch prospects you've heard touted, but baseball is a linear sport.

Promotions take place at sensible times both for the player and the organization. The Twins top two prospects played virtually no games in 2014. This team is in a spot to surprise this season, but making a deep run is probably out of the question. Promoting top prospects right out of the gate because "we want to see them" is not a smart practice.

Too often, baseball has the principles of other sports applied to it. This isn;t basketball. One player doesn't make a significant different in and of themselves, and sacrificing the long term goals for short term gains isn't a good practice.

I hope that Terry Ryan is keeping the wiley veterans up in hopes to wheel and deal them to teams that have dreams of competing. Clearly he's not going north with the 25-best guys on the roster.