< The Blog Days of Summer

tyler jay 2015 first year player draft university of illinois left-handed pitcher
Tyler Jay is a left-handed pitcher from the University of Illinois and was taken with the 6th overall pick of the 2015 First-Year Player Draft by the Minnesota Twins. Born on April 19th, 1994, Jay is currently 6'1" and 180 lbs. He was lightly recruited in 2012 when he pitched for Lemont High School in suburban Illinois, but he was not drafted and went on to pitch for the University of Illinois, who he committed to because they were the only school willing to let him continue to pitch; most other schools wanted him to switch to the outfield as he hit .484 with 11 doubles and 35 RBI in his senior year, but he wanted to stay on the mound. 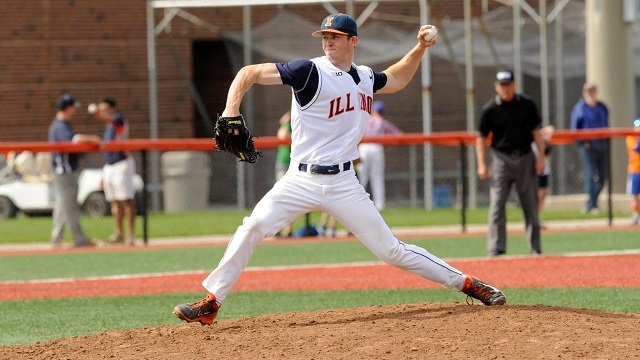 As a freshman at Illinois, Jay was thrown into the bullpen mix where he made 18 appearances and went 1-3 with a 3.10 ERA while striking out 20 in 20.1 innings pitched. The following year he emerged as the team's closer, earning a perfect 10 saves out of as many opportunities and posting a 1.94 ERA with 47 strikeouts over 41.2 innings to earn second-team All-Big Ten honors.

Playing for the U.S. Collegiate National Team last summer, Jay was teammates with Vanderbilt's Dansby Swanson and Carson Fulmer, UC-Santa Barbara's Dillon Tate, and Louisiana State's Alex Bregman, among others. He made a team-high 15 appearances, picking up 2 wins and 1 save while striking out 21 in 16.2 scoreless innings. His performance threw him into the limelight for draft prospects and made him a potential first-round pick for 2015.

This season Jay went 5-2 with 14 saves and 76 strikeouts in 66.2 innings pitched, allowing only 8 earned runs for a 1.08 ERA. He made one start in the first week of the season, throwing five shutout innings against Lamar, but then moved to the bullpen and helped lead the Fighting Illini to a 27-game winning streak at one point in the season. He was named the Big Ten Pitcher of the Year and was a Louisville Slugger First-Team All-American.

Though Tyler Jay has been touted as a closer, it's important to not shut out the possibility of him moving back into a rotation at some point in his near future. In college he pitched 3-4 innings to close out games on several occasions, and the tools he needs to be a starter at the next level are definitely there.

"Jay drew little attention from scouts as an Illinois high schooler in 2012, when he was a slight southpaw who topped out at 90 mph. His fastball and profile have taken off since he went to college, and he helped the Fighting Illini win 27 straight games this spring after starring with the U.S. collegiate national team last summer. Now he's a lock to become the second first-round pick ever produced by Illinois, following John Ericks in 1988, and he's the consensus best left-hander in the 2015 Draft.

"He is still not very physical at 6-foot-1 and 175 pounds, but Jay now works at 93-95 mph and peaks at 98 mph with his fastball, even when he works on consecutive days. He generates that heat with athleticism and a quick arm rather than an excessive amount of effort in his delivery.

"Jay has a deeper repertoire than most relievers. His plus slider is his second-best pitch, and he also has a curveball with power and depth and shows signs of interesting changeup. He has enough pitches and control to lead a pro team to consider trying him as a starter, though he lacks size and could speed to the Majors if he remains a reliever."

Twins scouting director Deron Johnson believes that Jay can be converted to a starter. In an article on Fox Sports North, author Tyler Mason included part of an interview with Johnson:

Jay has a plus-fastball that sits around 92-95 mph and a plus-slider reaching 87-89 mph, as well as a changeup at 85-88 mph. While his fastball might not have wicked speed, Tyler's curveball was arguably the best pitch in the entire draft and has been compared to Clayton Kershaw's. The continued development of his changeup will likely wind up being the determining factor in whether he ends up starting long term.

Deron Johnson believes that there is a chance Jay could start at Low-A Cedar Rapids. It is possible that the Twins end up rushing him into the majors to pitch from the bullpen this year and then send him back to the minors to stretch out as a starter. The Royals did this successfully last year with Brandon Finnegan, and with their surprise run in May, the Twins have placed themselves in a similar situation. While I wouldn't say I am completely in favor of this idea, if it worked out as well as it did for the Royals, that would be nothing to complain about. He has the stuff to compete at a high level, and it's going to be a lot of fun seeing what comes of it.