Gleeman & The Geek, Ep 483: Schedules, Scri...
by John Bonnes
Top-Tier Talent: Already in Minnesota?
by Cody Pirkl
The 3 Scariest Stretches on the 2020 Twins Sche...
by Nick Nelson
Breaking Down the Twins' 9 Opponents
by Nash Walker
Hindsight is 20/20: 4 Players the Twins Could...
by renabanena
With Buxton Uninjured, Twins Release 2021 Schedule
by RandBalls Stu

Other Baseball Today, 04:37 PM
I noticed this one-sentence item in the most obscure part of this morning's StarTribune print edition:   San Diego released former T...
›

Minnesota Twins Talk Today, 10:14 AM
With the real Twins around the corner, I have elected to sim to the playoffs to try and tease how the real club will do this fall, and as...
›

Minnesota Twins Talk Today, 10:51 AM
If you missed the live stream of Thursday's scrimmage, here's a quick roundup of highlights:
›

Other Baseball Today, 09:09 AM
Barry Larkin, former MVP, has been calling for removing the Kenesaw Mountain Landis name from MVP awards.Personally, until I read the art...
›

We're going to have a 60 game schedule, and that means that each team will play 40 games against their traditional division with another 20 coming against the geographic counterpart from the other league. Minnesota gets the NL Central which included just one team breaking the 90-win plateau in 2019, and two finishing below .500.

There's going to be a significant amount of rule changes or modifications. The regular season will run from July 24 through September 26. Below you can find a bulleted list with a link to each report:We already know there will be no fans. We already know that this entire thing could go up in flames if safety protocols don't end up keeping the virus in a manageable state. What we also know for the first time since March is that there will be baseball. Despite months of horrible public disparagement from both sides, it's once again the game that will attempt to unite us.

This is a season the Minnesota Twins were looking forward to. Names like Josh Donaldson and Kenta Maeda have made their way onto a roster coming off 101 wins a season ago. Sure this is a difficult calendar to compare statistically across previous years, but every single organization is in the same boat now. The goal is still to win a World Series, no matter how different the journey to get there may be.

There's certainly less nuance in a 60-game sprint than there is in a 162-game marathon, but the importance of every outing just got ratcheted through the roof. If you want the feel of a one-game Wild Card for the next three months you've got it. Buckle up because this is going to be something like we've never seen before.

We've got a week until teams begin Spring Training 2.0 in their home ballparks, but it's official, Play Ball!

Electronic strike zone? Seems like the perfect time to try it.

Electronic strike zone? Seems like the perfect time to try it.

It does, for distancing, but nope.

I would still encourage MLB to go the route of WWE and AEW, who have been using backstage employees and wrestlers' friends and family to have at least some people in their audience. Everyone is tested beforehand, and they are encouraged to social-distance in the audience. I think seeing a dozen people spread out in the homerun porch when Josh Donaldson's first homerun as a Twin lands would be more interesting than seeing empty stands. And since we won't want any fans behind homeplate or behind the dugouts close to the players, follow South Korea's lead and load those seats up with Teddy Bears. 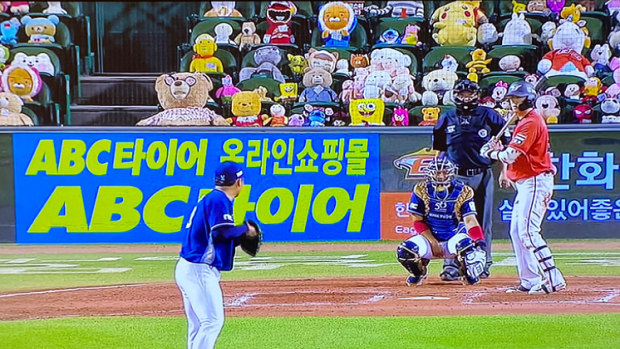 Taxi squad is interesting. I hope the Twins can also have a camp, of sorts, for minor league players to play 30-45 games at Ft. Myers. You can house how many players there? Just for the skill set needs, I think they would welcome play while staying quarantined...kinda like summer camp!

Taxi squad is interesting. I hope the Twins can also have a camp, of sorts, for minor league players to play 30-45 games at Ft. Myers. You can house how many players there? Just for the skill set needs, I think they would welcome play while staying quarantined...kinda like summer camp!

I would like to see some capacity of fans as well, but it sounds like that's off the table for now.

It would be nice for MiLB guys to have development of some sorts, but it sounds like the additional players in the 60-man player pool will need to be within 100 miles of Target Field.