Minnesota Twins Talk Yesterday, 08:17 PM
With the season fast approaching, what is the best way to watch Twins Baseball as a cord cutter? For the past several years, I've been us...
›

Other Baseball Yesterday, 01:56 PM
While we think about if a season happens or not.I started thinking about the opt out clauses by players, and what they will do.I tried to...
›

Minnesota Twins Talk Yesterday, 12:02 PM
No matter what kind of patch work 2020 season MLB comes up with, if anything at this point, it will amount to no more than a glorified pr...
›

Minnesota Twins Talk Yesterday, 09:19 AM
With the real Twins around the corner, I have elected to sim to the playoffs to try and tease how the real club will do this fall, and as...
›

Posted by SD Buhr , 08 March 2020 · 1,197 views
It has been over a month since we checked in on the MLB “Futures” at the William Hill and Elite sportsbooks and with spring training now well underway, it seems like a good time to see how the betting odds for the Twins (and others) are looking.

Of course, even if I see something really interesting, it won’t do me any good right now since I’m in Florida at least through the end of the month and the Sunshine State has not legalized sports betting, yet. So, while I can look up odds at the two booking sites I subscribe to, I can’t actually place any bets until I get back in Iowa.

Then again, with my inability to accurately predict college basketball games, that’s probably a good thing.
First, let’s take a look at an updated version of the chart outlining the Twins’ odds to succeed at various levels in 2020. 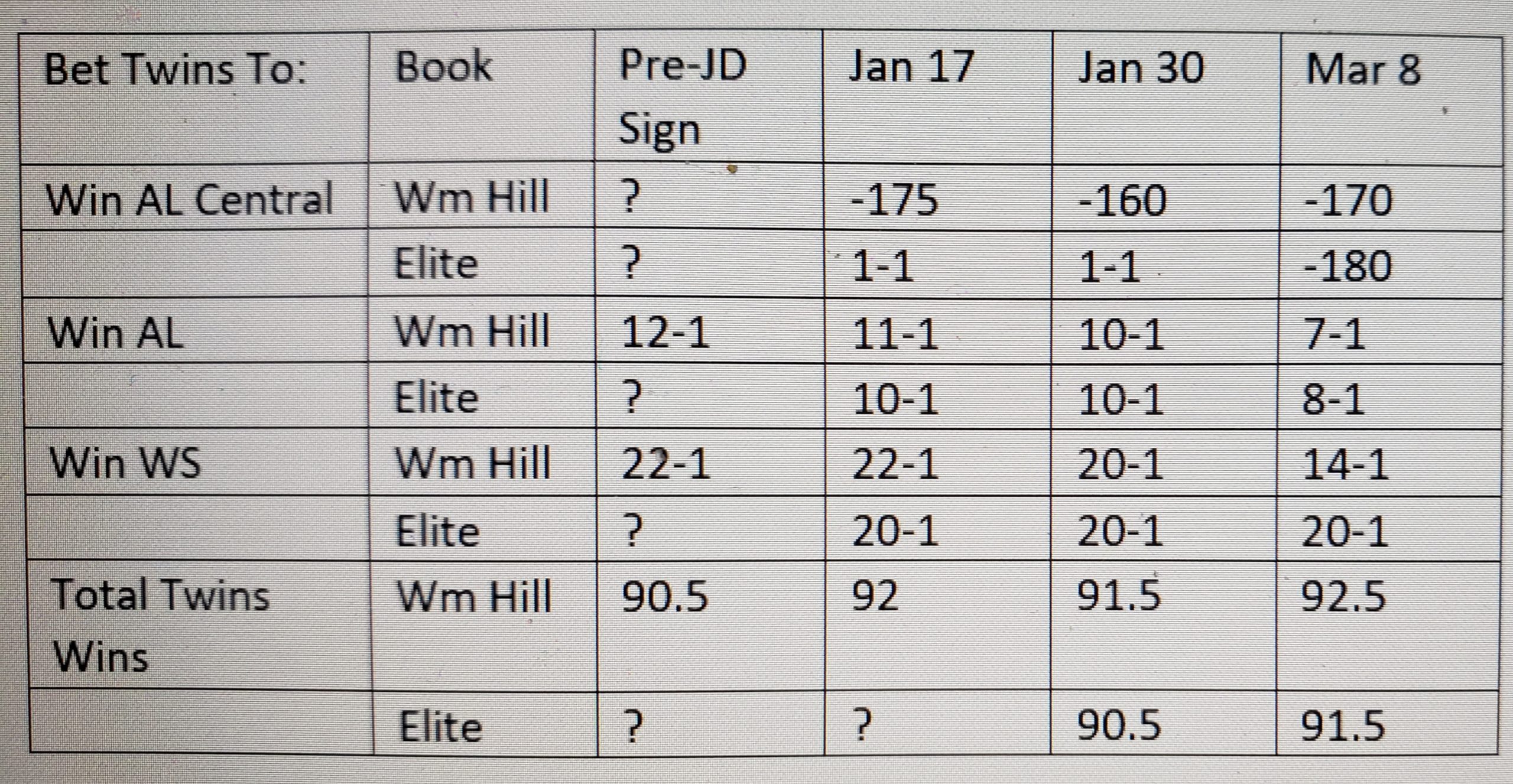 A couple of things jump out at us here and they’re mostly reflective of the folks at William Hill coming around to thinking the Twins might be better than originally thought.

William Hill’s odds on the Twins to win the American League pennant and the World Series have continued to drop.

Before the Twins signed Josh Donaldson, William Hill had the Twins at 12-1 and 22-1 to win the AL and World Series, respectively. Those numbers have improved to where they stand at 7-1 and 14-1 now. Interestingly, while Elite has adjusted their line on a Twins AL pennant from 10-1 to 8-1, they continue to see them as 20-1 longshots to win WS rings.

Overall, I’m feeling pretty good about booking my bets on the Twins to win the AL at 11-1 and the Series at 22-1. Now, all I need is for the guys to actually, you know, win!

Both books have increased the over/under on Twins regular season wins by one win since the end of January, with William Hill still projecting one more win than Elite does.

A few other interesting notes, just glancing at the differences between the two sportsbook sites:

Like everyone, they both like the Yankees to win it all. You get just a little above even money on the Yankees to win the AL pennant and a bit better than 3-1 odds on a bet to win the WS. There are so many other good teams that those odds don’t seem worthwhile to me. Let the Yankee fans feed the rest of us.
If you think the Astros can overcome their issues and ride their “us against the world” mentality into a repeat championship, you want to look at William Hill where you can get 9-1 odds on a Houston title. Elite is offering just 5-1 on the ‘stros. Both are third on the list behind the Yankees and Dodgers (3-1 WmH & 4-1 Elite).

In the last article, we saw a huge discrepancy between the two sites where the Red Sox were concerned. WmH had them at 12-1 to win the AL, while Elite had them at 5-1.

Looking at the American League Central race, while both sites have the Twins as favorites and the same predicted order of finish, there are some differences in the odds.

The White Sox get nearly identical lines (+350 Elite and +325 WmH). Of note, that puts Cleveland and Chicago in a virtual dead heat for the second spot in the Central, according to WmH.

I had to check the Royals lines several times to believe what I was seeing. I’m not sure I’ve ever seen a discrepancy between the two sportsbooks like Kansas City’s odds to win the AL Central.

Elite set the line at +750. That’s 15-2 (or 7 1/2 – 1). But WmH will give you 60-1 odds on a Royals division championship. Now, I don’t see any way in hell the Royals win the AL Central, so maybe the odds don’t matter. But, still, that’s an incredible difference and a prime example of why you always want to shop around. Imaging being the Royals fan who decided to put a few bucks on their favorite team at Elite, only to later find out they could have gotten 60-1 odds at WmH.

The Tigers, of course, pull up the back end of the division, getting 125-1 odds at Elite and 300-1 at WmH.
Interestingly, Elite has Cleveland and Minnesota both at 20-1 to win the World Series (along with Milwaukee and Philadelphia at the same odds, placing them tied for 10th on the list of WS favorites). WmHill likes the Twins twice as much as Cleveland, though. While the Twins are at 14-1, Cleveland is at 28-1.

William Hill has set some additional prop bets that weren’t out there before, such as pitting two teams against one another in a race to see which will win 30 games first.

For instance, you can bet on whether the Twins or Braves will reach 30 Ws first. Braves are even odds, Twins at -120.

When you shift to Twins vs Astros on the same bet, the Astros are favorites at -130, while the Twins get you +110.

Are you tired of RBIs not being a meaningful offensive statistic? Put a little money on Nelson Cruz to be the MLB leader in ribbies at 15-1 odds. Or go crazy and take Josh Donaldson at 60-1. Eddie Rosario & Miguel Sano both list at 100-1.

Jorge Polanco will get you 28-1 odds if he finishes as the MLB leader in hits.

What will it take to lead the Majors in home runs this season? Is the ball still juiced or will it be deadened? The over/under is set at 50 1/2 bombas.

Think Jose Berrios is going to become the ace we’ve been waiting for? Go get the 40-1 odds being offered on Berrios being the MLB ERA leader.

So many options. How will I possibly be able to wait three weeks before I can throw my money away on them?