Minnesota Twins Talk Today, 03:43 PM
Moving forward this will house every game-thread in the comments below until real baseball hopefully comes back. I should have done this...
›

MLB Draft Yesterday, 09:57 PM
I figured many would have interest in this. Hopefully, we have a draft in some variety this year, but in my contacts with the league offi...
›

Minnesota Twins Talk Yesterday, 03:06 PM
https://www.skornort...lars-and-cents/   The owners have made their proposal to the players. The players association will now have t...
›

The Cheapskate goes to a parade

Posted by ashbury , 31 October 2018 · 648 views
The Red Sox won the World Series on the road, so my tentative plan to be a Cheapskate and lurk the Fenway environs in anticipation of a fourth win proved impractical. Next best thing was to pencil in Wednesday the 31st, when a parade in the team's honor was scheduled.

Large crowds were anticipated for the 11:00 start, so again I relied on public transportation. And again I was concerned that the commuter train might already be full before it pulled into my station, but again it was easy-peasy. A rare unscheduled train for the event, and plenty of room. (Not so, on the ride home. Wisely, I boarded at Back Bay, one stop before Yawkey/Fenway, where tons of people got on and filled the train up.)

I'm not good at guessing crowd sizes, but I'll go with 200,000. If someone in authority tells me it was 50,000, I'll think that was low but go with it. If they tell me it's 1 million, I'll think, wow, I had no idea. Bottom line, though, there was just a huge crowd lining the entire parade route. I figured I'd go all the way into South Station (most everyone on my train skipped Fenway and got off at Back Bay) and then work my way back toward Fenway, and pick a reasonably uncrowded spot to wait for the parade. That didn't work - wall to wall people at the Common and beyond, so I circled back by side streets and met up with the parade at Back Bay, near the train stop I wanted anyway. I bailed out perhaps a few minutes early, to catch the noon train.

I can't say I'm thrilled with any of the photos I took, but here are a couple. This is on Tremont Street, near the end of the parade route, probably an hour before the Duck Boat vehicles would arrive:

It was kind of luck-of-the-draw which side of the vehicle each given player was waving from, and even with names on the sides I'm still not sure who was who. Is Eduardo Nunez wearing glasses?

This one is pretty definitely David Price, unless someone tells me it isn't.

I have a picture of confetti but it is wimpy. To get an awesome photo, I guess you had to be up high, so I am stealing this photo from the Boston Globe: 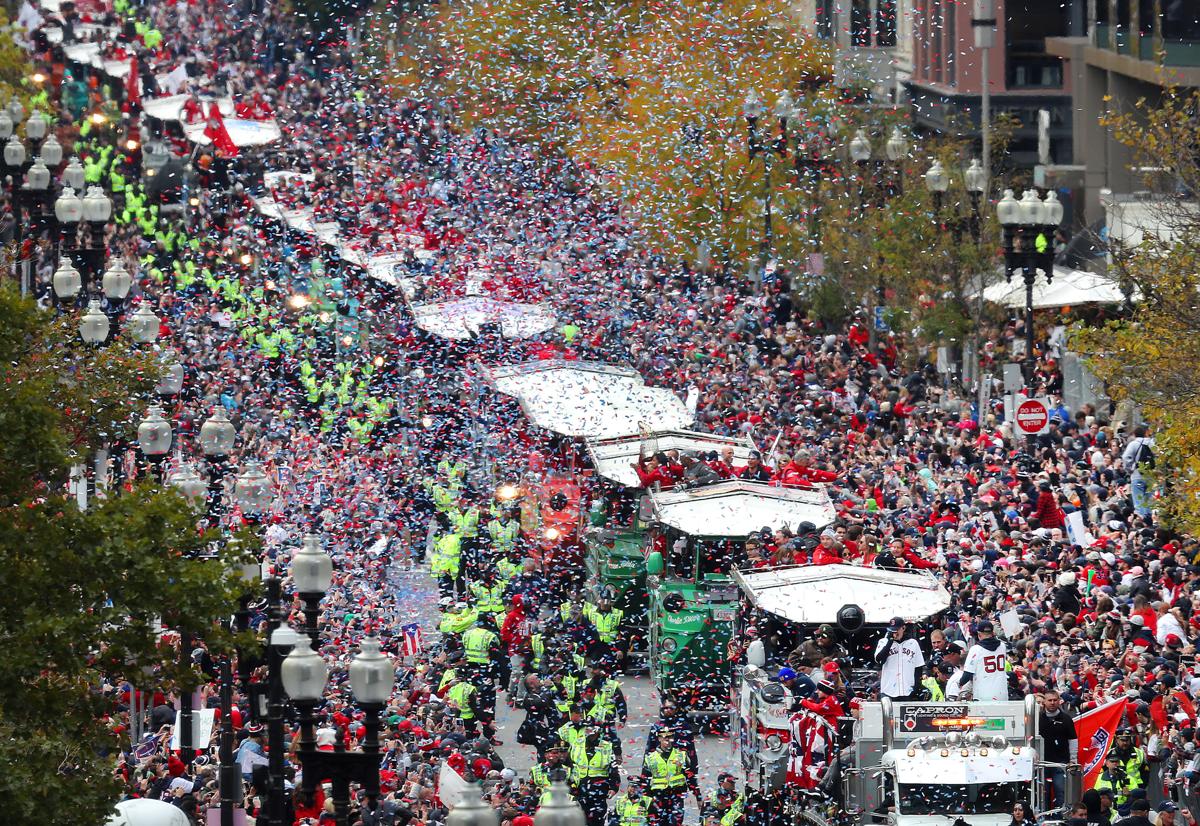 Season over. I am ready for the Arizona Fall League.