Minnesota Twins Talk Today, 08:34 PM
Is it time to panic yet?   Of course not! Honestly, after the last three games, I am just as confident in this team being a contende...
›

Minnesota Twins Talk Today, 03:16 PM
There haven't been many yet, but I'll start this today...   The Twins just announced that Zack Littell (hamstring) has been placed o...
›

Minnesota Twins Talk Today, 02:33 PM
We missed out on our big money aces. A big impact 3B will either cost age/money (Donaldson) or top prospects and money (Arenado/Bryant)....
›

Minnesota Twins Talk Today, 09:41 AM
Jake Odorizzi gets activated today to face the Royals, filling out the 28-man active roster which will include 16 (!) pitchers. The way t...
›

Breaking down the 2020 Twins walk-up songs

Posted by John Kelsey , 28 July 2020 · 1,606 views
The excitement of the home opener is a bit muted this year, but the excitement surrounding the release of the Twins walk-up song list is virus-proof, judging by the response to this Dustin Morse tweet this afternoon:


In an effort to break it all down and so this doesn't spin out of control, I’m mainly just going to cover the batting order for the home opener, but I’ve added a few other favorites from the pitchers and bench players, as well as a much-needed walk-up song for manager Rocco Baldelli.

Max Kepler: “All In” by Lil Baby

I am going to be completely honest here, I don’t know the song and I hardly even listened to the song. Every year I just shake my head when I eventually hear Kepler’s walk-up song. Maximillian is the only legitimately German baseball player in all of Major League Baseball, and I don’t mean ‘was born on a military base and spent the first 6 months of his life in Germany’ German. This man grew up in Berlin, the most notorious clubbing city in all of Europe and probably the world, and he goes with a song by Lil Baby? What I’m looking for here is a grimy, Berlin basement techno club staple, but Kraftwerk and Rammstein would also be fantastic consolation choices. Imagine this scene: Kepler walks up to the plate at Target Field with the bases loaded in the bottom of the ninth against the Yankees and “Du Hast” comes on. Either the Twins win or Vin Diesel’s character from the movie “XXX” charges the field and fights Aroldis Chapman, and I’m not sure which option I’d prefer. All I ask is that you embrace the German, Max. Embrace the German.

I would have bet my house on Josh Donaldson having a country song for three reasons.
1. He is originally from Florida.
2. He went to high school and college in Alabama.
3. He looks like this: 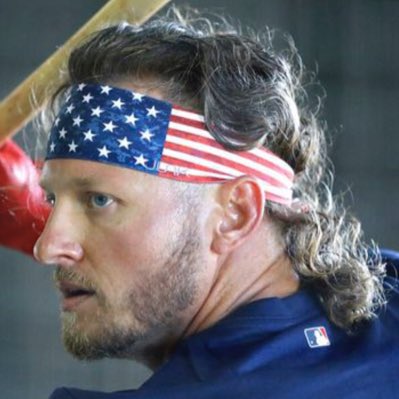 Despite all of these factors, Donaldson goes with the Playboi Carti track. Looking at his walk-up song history he’s cycled through hip hop songs throughout his whole career other than a period in 2015 when he went with “In the Air Tonight” by Phil Collins, after presumably watching The Hangover and gaining a newfound appreciation for Phil’s first single away from Genesis. Never judge a book by its cover, folks.

Those of you who have been clamoring for the Dominican version of “Without Me” by Eminem are in luck. The music video even features a teddy bear humping a boombox, what more could you want?

Nelson Cruz can do no wrong right now, and that streak continues as he keeps this merengue banger by Juan Luis Guerra as his walk-up music for another season. Juan Luis Guerra also gets bonus points for looking like the type of guy that moms would be really into, like Jimmy Smits or Andy Garcia.

Bad Bunny is everywhere right now, not unlike Rosario’s strike zone *ducks*. The Puerto Rican trap artist made it into three different tracks that are included in this list, so it’s not surprising to see Eddie yet again go with a song by his countryman this season.

It almost goes without saying, but this song is absolutely unimpeachable, so props to Garver for sticking with it for another year. I think it’s natural to worry that any catcher who goes by the nickname “GarvSauce” and whose intro song makes reference to stardom might be heading towards a Pierzynskian-level likability crash, but Garver genuinely seems like a very likable guy. He certainly backed up the song choice with his play last year, so here’s hoping he can do it again.

First off, I think we need to commend Farruko for wearing a mask in this music video. That, coupled with the rest of the video, which feels like one Eric Wareheim would have made for Major Lazer about 10 years ago, gets some major points for the Twins second baseman. Not that anyone will be there to see it, but I’d love to have this video playing on the video board at Target Field before Arraez’s at-bats instead of a picture of Luis in a Hammer Made shirt.

Our old pal Ceky Viciny, who you may recognize from Polanco’s song, is back featuring on another NSFW video, this one alongside Rochy RD. Ceky Viciny legitimately sounds like a Dominican Mystikal when his verse starts at the 2:14 mark in the song, which is probably the greatest compliment I could give any artist.

Byron Buxton: “Return of the Mack” by Mark Morrison

This song will hit a little too close to home for the home opener as Buxton returns from another injury tonight. Unfortunately Mark Morrison never made a song called “Sustained Health of the Mack” or “The Mack Will be Here Every Day and Promises Not to Run Into Walls”. Alas, the song is a first ballot 1996 R&B hall-of-famer alongside “Pony” by Ginuwine, and one I would never dare complain about. However, I will say Byron set the bar extremely high by picking “Flashlight” by Parliament as a 21-year old rookie in his first season. At that moment, knowing that the best prospect in baseball was a Twins player and more importantly a P-Funk fan, I think I would have given him one of my kidneys.

Starting pitchers get walk-up songs too. Unfortunately for them, most fans are still trekking over from Kieran’s or stuffing Dollar Dogs in their pockets and miss the whole affair. I could not wait to see what TeamDad Rich Hill would choose, and I was not at all disappointed to learn that he went with an early ‘90s grunge classic by Pearl Jam. While I do admit that song has some very strong dad energy, I was hoping he would go with something by the Replacements or Hüsker Dü as he attempts to ingratiate himself with his fellow Twin Cities Gen X dads. I’m assuming the guy who had “Dick Mountain” on his players' weekend jersey would prefer the more irreverent ‘Mats, so “Bastards of Young” would have been a strong pick.

Tyler Clippard: “Ready or Not” by The Fugees

Speaking of first ballot 1996 R&B Hall of Famers, every track off of the Fugees album “The Score” meets that criteria. Clippard also pulled a Donaldson and surprised me with this pick. This is not a face that screams Fugees fan, but I’m happy to be wrong in my preconceptions: A much-needed change of pace from Maeda here. My Japanese is a little rusty, so I have no idea what they’re saying but I dig it, right down to the Tom Morello-esque guitar solo.

DEEP CUT ALERT! Smeltzer picking maybe the 4th most popular song on a not very popular Eagles album cracks me up for some reason. The dude does not abide.

Whitefield might not get a single at-bat all year as he’s expected to primarily be used as a pinch-runner until rosters are cut. However, unlike Kepler, I have to give him credit for leaning into his heritage going with Australian artist Day 1. I personally think that “Land Down Under” by Men at Work, while perhaps a little too on-the-nose, would have really popped.

I would argue that closer walk-up music may be more important than any other member of the team, and we as Twins fans are in good hands with Taylor Rogers. Picking any song from "Rumours", the album that everyone’s parents own five copies of on vinyl, seems like a can’t miss proposition, but this might be the only track that would work for a closer. Now the question becomes do they have time to play the whole song, or can we just cut to the chase and start it at the bassline around the 3:00 mark?

Bonus Tracks:
Willians Astudillo:
“La Tortuga” is still recovering from a bout of COVID-19 so he did not make it back in time to be included for the home opener. “Turtles Have Short Legs” by krautrock band Can seems like a fitting choice when he is able to return.


Rocco Baldelli:
The skipper, Rocco Baldelli needs some walk-up music love as well, mainly because he’s shown more interest in music than any of his predecessors combined. Rocco is a noted Phish enthusiast so I think we’ll have to go that route, but I’ll admit to not being much of a “Phan” and therefore not overly qualified to make a pick. My only assumption is that the choice will be over 20 minutes long, will feature a solo from every member of the band, and when you watch it live you’re not sure if they’re still playing the same song about 15 minutes into it. “Everything’s Right” seems to fit the bill.


Finally, I would have loved to have had “What You Know About That” by TI playing in the background right as this page loads ala 2005 Myspace pages as a tribute to Joe Mauer, but I’ve been told that was not possible. Turns out I do not know all about that.