Josh Donaldson's Cursed (and Blessed) Calves
by Nick Nelson
An Open Letter from the 1974 Minnesota Twins
by RandBalls Stu
PIT 6, MIN 5: Taylor Rogers Blows Save, Win Str...
by Cooper Carlson
Trade Retrospective: How Did the Twins Do in th...
by Cody Christie
What’s Happening at the Alternate Site?
by Ted Schwerzler
Twins Notebook 8/6: Seeking Another Sweep
by Nash Walker

Other Baseball Yesterday, 10:44 PM
Before the season started, I was wondering about what would happen if the virus started spreading like wildfire in a clubhouse. Well here...
›

Minnesota Twins Talk Yesterday, 10:54 PM
There haven't been many yet, but I'll start this today...   The Twins just announced that Zack Littell (hamstring) has been placed o...
›

Other Baseball Yesterday, 12:14 PM
Doesn’t it seem like the MLB missed on a slam dunk by not scheduling more day games (see any weekday games)? When we have more people wor...
›

Coming off 101 wins in 2019, the Twins have put themselves in a position that GM’s could merely dream of. They only have around $70 million in guaranteed contracts and expected arbitration salaries on the books for 2020, making the possibilities almost endless. The window is open and it’s time to take full advantage of the roster and payroll situation the Twins' brass has put together over the last couple of years.

• C.J. Cron
I chose to non-tender Cron. This was one of the more difficult decisions to make due to the fact that when healthy last year, Cron was a very effective bat in the lineup that could hold his own defensively at 1st base. However, he’s coming off surgery and is expected to make $7.7 million in his final year of arbitration. That’s an amount of money that I chose to allocate in different areas. Tough luck for Cron, who could definitely contribute on a different roster.
• Sam Dyson
Non-tendered. This was just a formality as the Twins have already announced that they have moved on from Sam Dyson.

• Minnesota Twins Receive: Jon Gray
Colorado Rockies Receive: Trevor Larnach, Jhoan Duran, Wander Javier
This trade really gets the Twins rolling towards their offseason desire to acquire “impact pitching”. Looking back at the processes to championship contention that teams like the Cubs and Astros took could be a precursor to what the Twins plan to do. Frankly, I think it’s what they HAVE to do. Trading prospects, especially highly coveted prospects, is never something that is easy to do and shouldn’t be done unless it’s for the right player. Getting someone like Jon Gray, however, is exactly what could be constituted as being worth a valuable prospect package. Gray just turned 28, and still has two years of reasonable team control left before he hits the free agent market. He’s not the sure-fire ace that this team could definitely use, but he’s a solid 3/4 option that Wes Johnson could potentially elevate to a level that we haven’t seen yet from Gray.

• Minnesota Twins Receive: Kirby Yates
San Diego Padres Receive: Eddie Rosario, Jordan Balazovic, and Jorge Alcala
Another impact pitcher acquisition! Kirby Yates was a late bloomer, but he has been excellent in San Diego since arriving in 2017. Yates, who turns 33 in March, is in his last year of arbitration (MLBTR expects $6.5 million); so you avoid a long term commitment, even though you do give up a hefty package of Rosario, Balazovic, and Alcala. This may seem like an extremely high price to pay for some, but I don’t value Rosario and his expected $8.9 million arbitration very highly. Balazovic is the biggest asset being given up, but it’s justified for a reliever of Yates’ caliber. From the Padres perspective, they could look to replace Wil Myers with Rosario in the lineup even though he is owed $22.5 million for the next three years due to the fact that he posted a negative WAR last season. Myers’ contract might not be able to be moved, but I also don’t think they can afford to keep playing him if last year’s production continues.

• Josh Donaldson: 2 years/$40 million
How fun would this be?! I don’t think that the Twins will be able to sign multiple top tier starters from this free agent class, so I decided to go in a different direction. Josh Donaldson would be a major upgrade at the hot corner adding premium defense and another potent bat to the already powerful offense. If you can get him for this price, you have to jump on it. This would also mean moving Miguel Sano over to 1st base, which I feel could be of great benefit for team defense.

• Zack Wheeler: 4 years/$72 million
Zack Wheeler is somebody you can easily fall in love with if you spend just a little bit of time watching him on the mound. He’s flame thrower that has possibly not even hit his peak yet. Wheeler, who doesn’t turn 30 until the end of May, might be just the type of pitcher Wes Johnson could mold into becoming a true ace on a staff that desperately needs one. At $18 million/year, Wheeler is well worth the investment. Get it done!

• Brandon Kintzler: 1 year/$5 million
A reunion that could add a nice boost to a bullpen that already proved to be solid down the stretch of last season. Kintzler continues to have great ground ball numbers and has even increased his K/9 recently. If you’re not a huge fan of spending big on multi-year deals for relievers in their 30’s, this could be perfect value to add strength to the middle innings.

• Drew Pomeranz: 2 years/$7 million
To me, Pomeranz has one of the more interesting markets in the entire free agent class. Is he going to be pursued with caution due to his entire body of work as a mediocre starter? Or are teams going to go after him as a reliever who was lights out down the stretch for Milwaukee last season. Pomeranz added velocity after his move out of the rotation, which could be exactly what the Twins are looking for in a lefty reliever.

• Alex Avila: 1 year/$3 million
With Jason Castro entering free agency, it’s totally possible that he could get a deal to start somewhere on a multi-year deal. Also, Mitch Garver has entered the conversation for best catcher in the game, and you’re now looking for someone behind him who can contribute when called upon. Avila is a veteran, left-handed bat that Rocco could use frequently assuming rest remains a priority for Garver this season. 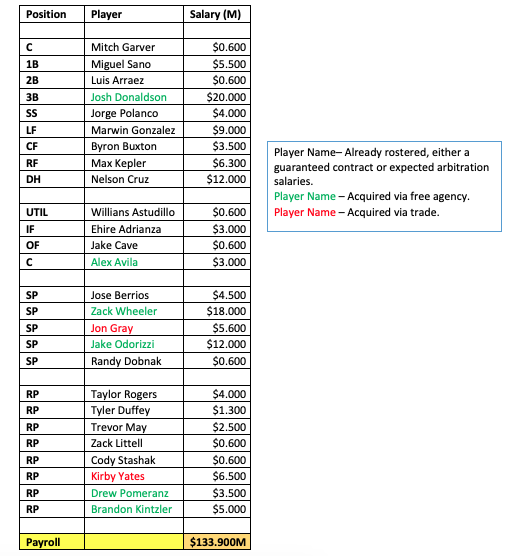 • The $500K Martin Perez buyout was accounted for in the $133.900 million payroll total.
• I used Twins Daily’s contract estimations. I do think some of them were slightly low, especially Donaldson and Wheeler; but at just under $134 million in payroll, there is room to increase payroll should some salaries end up higher than expected.
• Marwin Gonzalez was slotted in at LF in this plan. Jake Cave very easily could’ve been slotted in LF as well, but I decided against it in this version. I like Marwin to eventually revert back to the UTIL role, replacing Astudillo when Alex Kirilloff or Brent Rooker are ready for their promotions.
• The final spot in the rotation has Randy Dobnak slotted in, however I think it could very easily be one of Lewis Thorpe, Brusdar Graterol, or Devin Smeltzer. I believe that the Twins will use this spot as the first part of a piggy back, so if they wanted to use Graterol (my heart wants this badly), this could be a solution to limit his 2020 innings.
• In this scenario, I would look for them to pursue contract extensions with some of the players acquired, as well as current players rostered. I didn’t want to guess on extension numbers, as that can be very tricky. Nevertheless, the players that I would expect them to discuss extensions with would be Jon Gray, Jose Berrios, Miguel Sano, and Byron Buxton.

This is a team that I think could be even better than the 2019 Twins, with several improvements across the board. We’ll see how things actually shake out, but I would be ecstatic if Derek Falvey and Thad Levine did something even remotely close to this.

I've been a lurker on this site for a couple years now, but have never before submitted a comment, post, or even created an account until now.Thanks, and hope you enjoy!

Nov 11 2019 06:23 PM
I would personally pass on Yates for that price for a trade. Would rather see Brusdar in the pen and then sign Will Smith. Leave Yates and Kinzler for other teams. If you sign Will Smith for 3yrs/48 mil instead of trading for Yates and signing Kinzler your payroll is still only around 138 mil

I would personally pass on Yates for that price for a trade. Would rather see Brusdar in the pen and then sign Will Smith. Leave Yates and Kinzler for other teams. If you sign Will Smith for 3yrs/48 mil instead of trading for Yates and signing Kinzler your payroll is still only around 138 mil

Totally valid.My thought process was to just try and stay away from multi-year contracts at that AAV for relievers in their 30's.Wouldn't complain if we signed Smith, though.

According to MLB Trade Rumors, your payroll would be more like $149M.

The Padres are all in this year to save Pellers' job. Yates isn't going anywhere -- until they crash and burn.

According to MLB Trade Rumors, your payroll would be more like $149M.

I understand that, and I would have done some things a little differently had I been using MLBTR.I used Twins Daily's contract estimations.