Twins in the 2000s: The 2010 Season
by Matthew Taylor
2020 MLB Draft Top 50 Prospects: 21-30
by Andrew Thares
How Did the Twins Fare After the Rabbit Ball Se...
by Cody Christie
Twins Commit To Paying Minor Leaguers Through A...
by Seth Stohs
Taylor Rogers Shouldn’t Be THE Twins Closer
by Cody Pirkl
Let's Remember Some Twins
by RandBalls Stu

Minnesota Twins Talk Today, 09:42 AM
Moving forward this will house every game-thread in the comments below until real baseball hopefully comes back. I should have done this...
›

Minnesota Twins Talk Yesterday, 08:45 AM
https://www.skornort...lars-and-cents/   The owners have made their proposal to the players. The players association will now have t...
›

The off-season is officially here, and that means it is time for us to put ourselves into the shoes of Falvine and tell him what to do with this off-season so we can have a successful 2019, and get back to the playoffs. So, without further ado here is what I would do with the Twins off-season.

I believe that all of these choices are fairly easy. Robbie Grossman is a fine player, but on no world is he worth 4 million dollars. Everyone else is worth it, but I do think ODO's number is a little high. Is he worth 9.4 million dollars? Probably not, but you have to offer it to him if you are the Twins.

I am going to go into this blueprint giving the Twins 70 million dollars to spend, which would put them about at the same opening day payroll as they had last year. First, lets get to the needs of the Twins, in order of importance

Next, let's get onto who I believe is a lock for the opening day roster in 2019:

Those are the locks to be on the roster. I don't think there is any chance any of the above are left off for any reason other than injury, even Sano and Buxton. Now let's get into the next bunch, of near locks

Catcher Mitch Garver (If I ran the organization, he would be the everyday guy, but I am not. I think there is a chance a veteran gets the backup job over him if Castro is healthy to start the year)
IF Ehire Adrianza (He was good last year, and once again I would have him on the roster. However, utility positions are always hard to predict because so many guys fit the bill)
IF Tyler Austin (Austin certainly helped his chances to make the roster with his showing in Minnesota. I would think he gets the first crack at the 1st base/DH job)
OF Jake Cave (I could see the team bringing in a more proven right-handed bat to balance out the OF, but I think he makes it)
OF Max Kepler (I think there is a fairly good chance that we see Max traded this offseason, but if he isn't he will obviously be on the club)
RP Tyler Duffey (Another position that is hard to predict. I would think Duffey gets a shot though)
RP Gabriel Moya (I think as of now he is the #2 LHRP, but they could always bring someone else in)

Total: 10
Needs: 2B, a right-handed OF, DH, and a potential catcher

I am going to assume we see a 13 man pitching staff come opening day.

Now, here are some internal candidates that fit the mold:

Starting Pitcher:
Kohl Stewart: Stewart was impressive at the MLB level, but it was a SSS, and he didn't strike anyone out. I think the front office goes a different direction
Aaron Sleegers: Another starter that doesn't strike anyone out. I have a feeling Sleegers is waived from the 40 man purge this off-season. He is a dime-a-dozen arm.
Chase De Jong: He was just acquired this past season, but isn't going to blow anyone away on the mound. More of a depth piece in my mind. Not someone you want to run out there for long stretches.
Zack Littell: He has bounced between the bullpen and starting rotation since being acquired from the rotation. The front office seems to like him. I would say he has a better chance than the previously listed names to head north, but still not great.
Fernando Romero: Romero looked great when he first debuted, and then teams started to adjust. Has the highest ceiling of anyone on this list. I still think the FO takes someone more established
Stephen Gonsalves: He destroyed AAA ball last year, but struggled at the show. Not sure what to think of him. I believe he starts in AAA working on some things.
Adalberto Mejia: Just before he got injured he looked real good, but then he did end up getting injured. Him or Romero has the best chance out of this bunch.

Relief Pitcher:
John Curtiss: Looked real good at AAA, as a lot of these guys that will be on this list can say.
Andrew Vasquez: Is a left-hander, so has a better chance than some listed. Was a surprise September callup, but I think if the Twins take three lefties north it is Rogers, Moya, and a veteran.
Alan Busenitz: Looked really good at AAA as well, but didn't get a fair shot, so I wonder how much the FO likes him.
Oliver Drake: I think he gets waived from the 40 man, but if he doesnt he probably finds himself in the pen.
Matt Magill: A great find for the Twins, but I have no idea if he is back. I think the Twins would like to upgrade his spot in the pen, if they can.

1st base:
Joe Mauer: If, and that is a big IF, Mauer wants to come back the job is his. However, I do believe that he is going to call it quits and retire.
Brent Rooker: Rooker started off slow, but really came on strong in AA. Some think he could be up this year, and I do agree, but I don't think it will be on opening day.

2nd base:
Nick Gordon: Gordon is a top prospect, although he really struggled at AAA. I expect the Twins to bring someone in on a one year deal for a stop gap. Let Gordon prove himself at AAA. Eventually there will be an injury in the infield to get him up if he does perform.

Outfield:
Lamonte Wade: He comes from the Robbie Grossman mold. However, he is left handed, so I believe that hurts his chances.
Johnny Field: I believe Field will be waived this off-season.

Now, let's get onto the moves I would make if I were the Twins 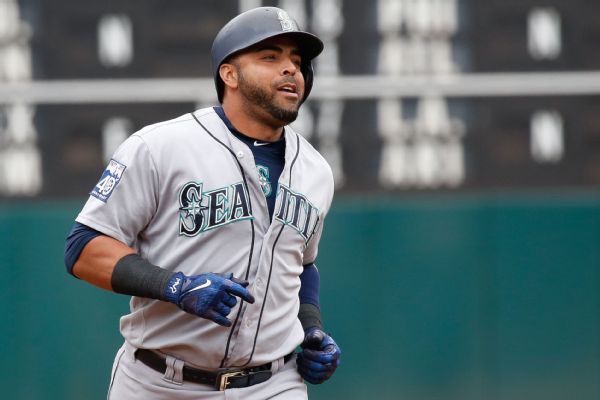 -Swap Eddie Rosario and Max Kepler
This moves only makes sense from the way I view it. Maybe there are numbers that disagree with me, but from the eye test, I would think Eddie Rosario belongs in right field. He has a cannon for an arm.
-DON'T sign a 1st basemen, even if it is Mauer
I know, I know, Mauer is beloved. However, there is no need to carry two first basemen types on the roster. We have Tyler Austin, we don't need another. Here are some other names that can play first for when Austin DH's: Max Kepler, Mitch Garver, Ehire Adrianza, Miguel Sano, Brent Rooker. There is no need to bring in another player that can only play first base.
-Sign D.J LeMahieu to a 2 year, 27 million dollar deal
This may be a bit pricey for D.J., but in my opinion, he is the best 2nd basemen option out there. He does get help from playing at Coors Field. However, he does play with an above average glove, and only struck out 14% of the time last year.
-Sign Marwin Gonzalez to a 3 year, 33 million dollar deal
Marwin Gonzalez is the ultimate utility man. Here, you hit 4 birds with one stone as Marwin appeared at 4 different positions last year. You can plug him in as a backup infielder, and outfielder, making both Ehire Adrianza and Max Kepler expandable if you see that as a possibility. He is also a switch hitter, so he isn't limited to a platoon role.
-Trade Max Kepler + prospects for Raiseil Iglesias
Iglesias fits the role as the shutdown reliever that I was talking about earlier. I think the price here would look something like Max Kepler and Nick Gordon, Wander Javier, or Stephen Gonsalves. This is something I would be willing to do, being under team control for the next 2 years.
-Sign Nelson Cruz to a 1 year, 16 Million dollar deal
Cruz immediately fills in as an impact right-handed designated hitter who can also go into the group of potential first basemen. He is a veteran leader who knows how to hit the cover off the baseball. He could also play corner outfield when needed. This gives you an outfield of Cave, Buxton, Rosario, Gonzalez, Cruz
-Sign Jerry Blevins to a 1 year, 6 million dollar deal
Blevins is a great LOOGY, and with a new manager in place I am confident that we will actually see the LOOGY be used correctly. Yes, we already have Rogers, but having two lefties doesn't hurt, especially when you go with an 8 man pen.

That is what I would do with my offseason. That gives you a potential roster of (Players listed in parenthesis are who I see as the next man up if an injury happens.

Obviously, the lineup still depends on the growth of Byron Buxton and Miguel Sano, but the addition of Nelson Cruz should help with consistency. Lemahieu is a gamble in a bunch of unproven 2nd basemen, but he does provide positive defense. Gonzalez provides flexibility and a switch-hitting presents that can hit both sides of the plate.

I would head up north with Romero, although I think that the front office will opt to sign a veteran with more of a track record to a small one year deal and give them the first shot on the 25 man roster.

If the front office decided to only send two lefties up to Minnesota for opening day I think Buesnitz would get the spot of Moya, but other than that all other pieces would be set in stone. I think this would be a better bullpen than last year. If Reed could return to prior form they could be real good.

So, there you have it. This is what I would do if I was in charge of the Twins front office.

I like the offense in this plan...concerned on the trade price for Iglesias (btw you have Gordon being part of the trade package and as your fallback at 2B

and the same rotation plus Pineda