Choose Your MVP: Re-evaluating the 1965 MVP Race
by Matthew Taylor
Taylor Rogers and the Value of the First Pitch
by Matt Braun
Coaches Combating COVID During Shutdown
by Parker Hageman
The Show Must Go On: Over the Hill
by Nick Nelson
What To Watch While You Wait For Baseball, Part IV
by RandBalls Stu
Opening Day Hope Still Unites in Twins Territory
by Ted Schwerzler

Other Baseball Today, 12:40 PM
Why not?Afterall, they will get their guaranteed money and millions where millions of other Americans will not. https://www.spotrac....b/...
›

Minnesota Twins Talk Today, 08:31 AM
Hi all -   In honor of Opening Day there are a lot of classic MLB games being streamed today. One of them is the 2009 AL Central Tie...
›


I recently posted a blog about Chris Saleand the news that he was set to undergo UCL reconstruction. That post covered some questions surrounding the diagnosis and decision-making that occurs when players/teams are faced with this dilemma. That post got a little lengthy, and I chose not to delve into the surgery itself, as I felt that may be better presented as a separate entry. My intention with this post is to discuss some of the different techniques that are used to perform UCL reconstruction. This does get fairly technical, and I apologize in advance if it is more than people would like to know.

First, we should revisit the anatomy. The ulnar collateral ligament (UCL) is a small but strong ligament on the medial (or inner) part of the elbow. It is around the size of a small paper clip. Ligaments (by definition) connect one bone to an adjacent bone. The UCL spans from the medial epicondyle of the humerus (the bump you can likely feel on the inside of your elbow) to the sublime tubercle of the ulna (one of the two forearm bones). (As an aside, sublime tubercle is one of my favorite terms in all of anatomy).

As with nearly any reconstructive surgery in orthopedics, our aim is to recreate the native/normal anatomy as closely as possible. In order to do this, most techniques utilize small tunnels that are drilled into the bone at the ligament attachment sites. The tissue that is used to reconstruct the ligament is then woven through these tunnels and tightened to create a secure new ‘ligament’ that heals and strengthens over time.

The primary differences between different techniques are the ‘approach’ (or how tissues are moved aside to see the damaged areas), the specifics of how the tunnels are made and used, the type of tissue (or graft) that is used to make the new ligament, and the way that the graft is secured in place. There are a number of variations that exist, but I’ll cover a few of the most commonly used methods.

First, some history may be in order. The first UCL reconstruction was, famously, performed on Tommy John. Tommy John was an outstanding pitcher for the LA Dodgers in the early 1970’s, and had compiled a 13-3 record in 1974 when he had a sudden injury to his elbow and was unable to throw. Imaging was performed, and the diagnosis of a UCL tear was made by pioneering orthopedic surgeon, Dr. Frank Jobe (of the famous Kerlan Jobe clinic in LA). Dr. Jobe had an idea to perform a reconstruction of the UCL, and practiced on several cadavers until he felt he had worked out a promising technique. He told Tommy that he thought he had a 1 in 100 chance of a successful return to MLB pitching. John decided to go ahead. The surgery was ultimately successful, and John returned to pitching in 1976. Though Tommy made it back, he did have a temporary palsy of his ulnar nerve after surgery, which is the ‘funny bone’ nerve that is near the UCL. This caused him significant weakness in his hand at first, but fortunately the strength returned over time and Tommy was able to return to pitching. Interestingly, he won more MLB games after surgery than he did before surgery, and pitched until 1989. There is a story that Jose Canseco hit a homer off John late in his career. Apparently Canseco’s father was Tommy’s dentist, and Tommy said something to the effect of “When your dentist’s kid starts hitting home runs off you, it’s time to retire.”

The technique used for this first surgery was termed the Jobe Technique (for obvious reasons). It involved removing the attachment of the muscles to the inner part of the elbow and pulling the muscles toward the wrist to get a good look at the UCL itself. Tunnels were drilled in the bone at the normal attachment sites of the ligament, and a small tendon from the forearm (called the palmaris) was used to weave through the tunnels making a ‘figure-8’ in order to make a new ligament. (The palmaris is a non-necessary tendon that is located in the forearm of about 2/3 of the population. For those patients who don’t have a palmaris, we usually use a hamstring tendon called the gracilis for this procedure.) The old ligament was left in place and sewed into the graft. The nerve was also moved from its normal location (behind the bump) to in front of the bump to take some of the tension off. This is called a ‘transposition’ of the ulnar nerve.

This technique was used for a while, but it did have some drawbacks, such as a high percentage of patients having ulnar nerve problems after surgery and some weakness resulting from detaching and reattaching the muscles of the forearm. Because of this, other surgeons sought new ways to perform this surgery.

One commonly used technique was termed the ASMI-modification of the Jobe Technique. ASMI stand for American Sports Medicine Institute (in Birmingham, AL) and this modification was initially described by Dr. James Andrews and colleagues. This involved similar bone tunnels, but the main difference was in the way that the muscles were treated. Rather than detaching the muscle and reattaching at the end of the surgery, in the ASMI technique the muscle was lifted up (and not detached) and the work was done underneath the muscle. The ulnar nerve is transposed when this technique is used (like the Jobe technique). The passing and fixation of the graft is essentially identical to the Jobe Technique as well.

Another commonly used technique is called the ‘docking method’. There are a couple of main differences between the docking method and ASMI method. First, the docking method utilizes a ‘muscle-splitting’ approach rather than a ‘muscle-lifting’ approach like the AMSI technique (see figure). This means that the muscle is divided between its fibers and a ‘window’ is created in the muscle in order to see the torn UCL and make the tunnels. There is also a difference in the way the tunnels are made. In the ASMI technique, the tunnels are the same size all the way through, and the graft tissue is passed all the way through the tunnels. In the docking technique, the tunnel on the ulna side is the same. But on the humeral side, the tunnels are sort-of half tunnels with smaller tunnels continuing on through the back side of the bone. This is because the graft is fixed in a different way- there are strong stitches that are attached to the ends of the graft that pull each end into the large tunnels. The stitches then pass through the small portion of the tunnels and are tied behind the bone, which secures the graft in place.

This technique does not require transposition of the ulnar nerve, which is an advantage because less handling of the nerve generally means less risk of trouble with the nerve after surgery.

There are a handful of other techniques that are slight variations on these themes, primarily using different devices such as anchors, interference screws or metal buttons to achieve graft fixation. There have been a number of cadaver biomechanical studies done that have compared methods, and they have been found to be largely equivalent. There seems to be a smaller incidence of ulnar nerve symptoms after surgery when the nerve is not handled/transposed (which makes some sense). The return to play rates are very similar regardless of which technique is used, with perhaps a slight favor to docking technique depending on the study.

I trained with Dr. Andrews, and performed nearly 100 UCL reconstruction cases during my fellowship using the ASMI technique. In my own practice, I tend to use the docking technique most commonly. I do this because I would prefer not to transpose the nerve if I don’t have to in order to decrease the likelihood of nerve problems after surgery. We also saw some problems with fracture of the bone near the humeral tunnels when using the ASMI technique, and using the docking technique allows us to make smaller tunnels. This makes fracture in this area less likely. That said, Dr. Andrews has had (and continues to have) tremendous success using this technique. As we have learned more about this type of surgery, it has become clear that it is important that the bone tunnels be made very accurately, as improperly placed tunnels seem to be a risk factor for inability to return to full participation. There has also been some investigation as to whether addition of PRP or other biologics to the reconstruction area at the time of surgery makes a difference in healing speed or strength. At this time, I am not aware that any research has shown a difference.

If anyone has managed to make it this far without falling asleep, I hope you found this discussion interesting. Feel free to leave a comment below if you have additional questions. Thanks for reading. Safe wishes to you and your families.

Fascinating. Thank you very much! I found it very compelling, and the diagrams are also very helpful. I love this stuff!

Anyone else in the mood for some chicken wings now? 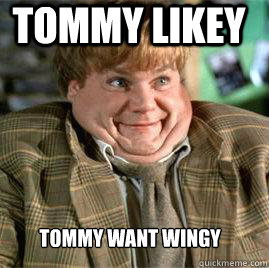 Anyone else in the mood for some chicken wings now?

Mar 26 2020 05:01 AM
Heezy, the surgery Richard Hill had was different than these techniques, correct? I'd be interested in having that explained!

Heezy, the surgery Richard Hill had was different than these techniques, correct? I'd be interested in having that explained!

It was! Quite different, in fact. Let me see what I can put together.

Heezy, the surgery Richard Hill had was different than these techniques, correct? I'd be interested in having that explained!

It got a little longer than I anticipated, but hopefully you'll find it helpful. Thanks for the question!