Let's Remember Some Twins
by RandBalls Stu
Baseball Is Running Out on Its Future
by Ted Schwerzler
Are Torii Hunter and Josh Donaldson Future Hall...
by Matt Braun
2020 MLB Draft Top 50 Prospects: 31-40
by Andrew Thares
Is Miguel Sanó About to Have a BABIP Problem?
by Matthew Trueblood
How the Twins Top 3 Pitchers Stack Up Against E...
by Cooper Carlson

Minnesota Twins Talk Today, 10:29 AM
https://theathletic....=freedailyemail   The players have rejected the owners last proposal, the players have proposed a longer seas...
›

Twins Minor League Talk Today, 10:12 AM
Baseball America takes a look at what is happening in the minors, a season that would now have been a couple of weeks old.   https:/...
›

Minnesota Twins Talk Today, 10:12 AM
https://www.skornort...lars-and-cents/   The owners have made their proposal to the players. The players association will now have t...
›

Minnesota Twins Talk Today, 07:18 AM
Canceled due to riots.
›

Minnesota Twins Talk Today, 08:34 AM
Moving forward this will house every game-thread in the comments below until real baseball hopefully comes back. I should have done this...
› One of the biggest questions entering the 2018 season is what we can expect to get from Kyle Gibson. Much attention has been given to the differences in his 1st and 2nd half, so I'd like to take a look and see what version of Kyle Gibson we will get in 2018 or if it is somewhere in between. I don't just want to throw a bunch of statistics at you as that doesn't help determine if his 2nd half is truly repeatable, but I do want to start there as that will guide the rest of the article.

Here are a few stats that I think help explain the difference in overall results we saw from Gibson: 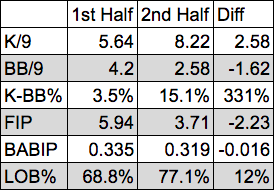 Clearly, the biggest difference is that he did lot more striking out and handed out a lot less free passes, which is a good recipe for any pitcher. Let’s take a second to appreciate that he had a 331 percent increase in his K/BB percentage from the 1st half to the 2nd half, which I think helps explain the improvement of virtually every other stat. As reference, Gibson's career K/BB rate stands at 7.9 percent. So what adjustments did Gibson make that attributed to the dramatic difference between his two halves?

I used Brooks Baseball pitch f/X data to help me answer this question. Below is an overview of some of the data I will be referencing.

Gibson has long been known as a sinker ball pitcher who relies more on ground balls than swing and misses to get him through his work day. Interestingly enough Gibson threw his sinker about 28 percent of the time in his 2nd half appearances compared to about 40 percent of the time (also his career mark) in the 1st half. He relied much more on his fastball in the second half than he ever has throughout his career, especially as the first pitch he threw to batters. Getting ahead in the count, specifically throwing first pitch strikes, is key to a pitchers success and allows him some flexibility in how he can approach the rest of an at bat. Last year, some of the best pitchers in baseball lead the league in first pitch strikes headlined by Clayton Kershaw.

Another takeaway from the data above that helped was the differences in pitch movement from his sinker, change up, and slider from each half. Essentially his sinker and change up dropped more while his slider became more of mix between a curve and a slider, which some would call a “slurve”. A change in release point can be credited for this change in pitch movement. As a visual, I have attached a graph of his average vertical and horizontal release point for each game in 2017. Vertical release point is measured from the top of the pitching rubber and horizontal release point is measured from the center of the pitching rubber.

To summarize these graphs, Gibson lowered his arm angle slightly but the bigger difference was that he slid about a foot towards third base from the first half into the second half (see below). This gave hitters a new perspective from which they saw the ball released from Gibson. Again, these adjustments are part of the reason why his pitches created a different movement pattern in each half. 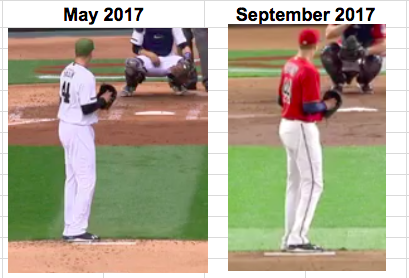 So what does this mean for 2018? Like most, I tend not to look into Spring stats although he did have a solid, yet unspectacular spring. From video, I can tell you that Gibson has “looked” good this spring and that he has carried his adjustments noted above into spring training. That said, I think Gibson was able to fool a lot of batters in the second half of last season because he had changed his delivery and pitch selection. In other words, hitters had a scouting report on Gibson but then he didn’t follow it and was able to catch hitters off guard. Despite his second half numbers, Gibson is not a guy who is going to consistently strike out almost one batter an inning. He also will not be the pitcher who walked 4 batters per inning. He will fall somewhere in between. The great thing about 2018 is that Gibson is our number 5 guy which will help ease expectations from Twins fans. I would expect a typical pitching line for him to be 6 IP, 2-3BB, 4-5K, and 3-4 ER which is pretty good for a back end rotation guy especially with the backing of a lineup that will be on of the best in the league.