May 24 2019 05:00 AM | RandBalls Stu in The Lighter Side
Karl Paulson is enjoying the Twins’ astonishing 2019 as much as anyone. He’s also prepared to lose his damn mind at the first sign of a minor setback.

“I’m going to freak the entire hell out if they lose three in a row,” said Paulson. “If I can buy an actual, physical panic button, I will purchase it and smash it with my fists.” Image courtesy of © Kelvin Kuo-USA TODAY Sports
Minnesota’s remarkable start, which has led to an MLB-leading winning percentage of .673, means that losing streaks have been few and brief. The longest one, through 49 games, has been a mere two. And Paulson knows it.

“I’ve gotten comfortable, I’ll admit it,” said the Hopkins man. “They lose a game, or one of the starters only goes 4-5 innings, it’s water off a duck’s back. On the rare occasion they lose two, it’s a weird feeling, like a bad storm’s approaching and all the animals start acting funny. But then things go back to normal.”

It’s almost inevitable, over the course of a 162-game season, for even the best teams to have a bad run of games. Despite a ridiculous 8-game lead in the AL Central heading into Memorial Day weekend, the Twins are almost certain to run into a hot team, have a string of rough starts, or finally slump at the plate. Maybe even all at once. Paulson predicts he is absolutely not ready for it.

“You know your cousin on Facebook who is way too political and just won’t stop posting,” asked Paulson. “If they lose three games, in a row, to anybody, I’m going to be him. I’ll call them frauds and posers and claim they won’t even make the playoffs. I will call for Baldelli’s head. I will say I’d rather be a Royals fan. It’s going to be a trainwreck.”

If the Twins somehow manage to continue this torrid pace and avoid even a minor losing streak, Paulson said he has a back-up plan.

“If they get to the All-Star break without losing three in a row, I’m going to flip out when they lose two in a row,” vowed Paulson. “Two games? In a row? Good luck against the Astros, chumps.”

Those bastards! Going to lose more than twice in one week... I just hate them so much.

I was freaking out when they had that little 2 game slump last week.....we're being spoiled right now. I absolutely love it and don't want it to end.

Yeah, the Twins are doing a good job of keeping the Judas Cradle in the corner of the garage.

I enjoy fact that, at current time, our biggest complaint is that our number 5 starter is not pitching as well as we want.It is fun to be a MN fan and always expect the good things to come to an end and everything will turn and by end trade deadline we are selling off all our pieces.

Those same people that say during this time of season, just wait they will go back to being the Twins we know.Those people that do not even watch the games just hear about them.Those people will be yelling and screaming about how good they are come August and September and start asking who is going to the game tonight.Happened every year during their last good run.

We have already overreacted to a couple of 2-game losing streaks, so yes.

Am I the only one worried about Randball's Stu? This marks two consecutive articles that were barely chuckle worthy.

Flash in the pan?

Does any one know if an MLB team has never had a 3+ game losing streak in a season? 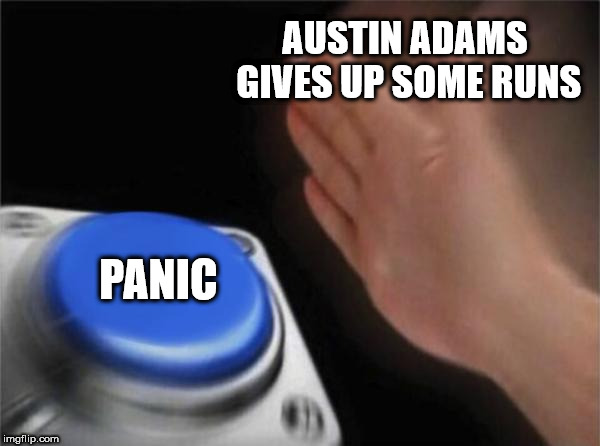 If Twins lose 3 in a row, please put me in a straight jacket and throw me into padded cell until mid November.

It’s almost inevitable, over the course of a 162-game season, for even the best teams to have a bad run of games.

Forget 3 games, or even 2.  I checked the score earlier and Berrios was behind 4-1.  To the White Sox.  You better believe I smashed the panic button with a sledgehammer.  And a jackhammer.

And yet, I went for a walk, and when I came back to find they were up 8-4, I wasn't at all surprised.

Does any one know if an MLB team has never had a 3+ game losing streak in a season?


I know the 1992 Blue Jays were never swept in a season series. Not sure about not having a 3 game losing streak though. This sounds like a visit to Baseball Almanac’s schedule page is in order.

I know the 1992 Blue Jays were never swept in a season series. Not sure about not having a 3 game losing streak though. This sounds like a visit to Baseball Almanac’s schedule page is in order.


The 2001 Mariners did not have a 3 game losing streak until the third week of September when they had a 4-game losing streak, which came just after they clinched the division and home field advantage.

Last year’s Red Sox team lost 3 in a row in April, twice in August, and once in September. Any other candidates I’m not sure of, my baseball memory only goes back to the late 80s. If I’ve committed a commenting faux pas by repeatedly quoting myself please accept my humble remorse.

May 25 2019 04:29 AM
Okay so the list below completes a look up of what I believe is all teams in history that had a .700 winning percentage or better. Only the 1902 PITTSBURGH PIRATES went without a 3 game losing streak; in a 142 game schedule.

Also, amongst the teams I’ve looked up here, only five teams went without a 3 game losing streak in the season’s first 50 games. Certainly doesn’t mean this year’s Twins are the only other team to do it. But amongst the top regular season teams in history only the 1902 Pirates, 1927 Yankees, 1939 Yankees, 2001 Mariners and 1907 Cubs did. Next task I think is to look up the season’s for all teams that’s on 100+ games.

3 game losing streak in third week of May. That was it.

Lost games 2-4 of the season to (to the Senators) to start the season 1-3. 4 game losing streak in June.

Did NOT have a 3 games losing streak in their 142 game schedule.

Two 3 game losing streak in June and a 4-gamer in September, one loss-tie-loss streak in July.

I read the headline and tried to remember when we had a 3-game losing streak and I forgot to panic. Apparently this was just a drill.Don't worry - my panic-button finger will be alert until we clinch the division (late August?)