Dec 06 2019 09:00 PM | Nash Walker in Minnesota Twins
As the Twins survey the open market, there are three gut-wrenching players who may have them losing their appetite. The Twins should consider signing them to avoid further damage. Typing that name made me feel anxious. Recency bias from the deafening grand slam in game two of the 2019 ALDS may have forced my hand. The reality, however, is that Gregorius has destroyed the Twins for much longer than last summer.

To make matters much worse, Gregorius has carried this excellence into October. Gregorius has a 1.346 OPS against the Twins in four postseason games, including two huge, game-changing home runs. Must we watch the most recent example?

There have been rumors swirling surrounding the Twins and Donaldson, and the speculation picked up when C.J. Cron was non-tendered on Monday, presumably opening an opportunity for Miguel Sanó to move across the diamond. Some Twins fans have pointed out Donaldson’s history at Target Field, and rightly so.

Although Target Field ranks 24th in home run factor, right-handed hitters have the advantage of a shorter wall in left field. Nelson Cruz has 100 at-bats or more at 15 MLB stadiums, and his 8.4% career home run rate at Target Field is the highest of any other ballpark. Donaldson has homered in 12% of his at-bats at Target Field:

Encarnación is another righty with power that absolutely adores Target Field. In 45 games at the park, he has hit .302/.415/.633 with 17 homers and 46 RBI. Twins fans have long loathed the perched arm “parrot” rounding the bases after slugging a bomb over the left field wall.

In 409 plate appearances, Encarnación has 27 home runs and a .287/.386/.568 line against Minnesota. The latest pounding came in the ALDS where he went 4-for-13 with two doubles. Encarnación went just 1-for-18 in the ALCS against Houston with 11 strikeouts.

The Twins have an opening at first base, and although he is entering his age-37 season, Encarnación was a passable first baseman in 489 innings last year. He had -1 DRS and a -0.9 UZR, according to FanGraphs. Here is a recap of Encarnación helping the Indians beat the Twins in 2017:

The Locked On Twins podcast is back and will be posted every weekday on my Twitter @nashwalker9 and on the forums here at Twins Daily. The Locked On Podcast covers all things Twins (news, game recaps, analysis, etc.) join me for the ride!

I wanted Donaldson last offseason, butI think he had a make it good year and will now get a good size longer term deal.

Didi would be a perfect Twins fit. Twins need to improve defensively and adding Didi at SS and move Polanco to 2B, which I think he would grade out extremely well and having Arreaz to 3rd or a utility role would help the pitching out tremendously.

No thanks on Edwin, a DH part time 1B and his better days are behind him.

Dec 07 2019 06:09 AM
If you wanted to sign all the players who have tormented the Twins in recent history, you're gonna need a bigger dugout!

Come to think of it, there are players who have tormented the Twins, who still play for the Twins!

Donaldson, but for a 2 or 3 year deal at 20-25 million/year, I propose a better long term solution for third. Offer a prospect package that includes Arraez and Kirilloff to the A's for Chapman. This opens up 2nd base for Polanco and fill the hole at short with a good defensive shortstop. Buy out Chapman's arbitration years with an Alex Bregman type deal like 7 years/70 million.

If Moustakas gets 4 years, Donaldson's looking for 4 or 5.Probably will get like 4 years 88.I could see ChiSox getting aggressive and moving Moncada to 2B

I'd almost rather get a pitcher like Syndergaard if I'm giving up Arraez AND Kiriloff, but the Chapman idea is intriguing.An infield of Champman-3BDidi or Jose Iglesias-SS Polanco 2B and Sano-1B would be pretty good defensively (especially the left side) and if Didi is your SS that infield can mash with anybody.If it's Iglesias you get an excellent glove and a guy who's figuring out how to more of a factor offensively.Kind of like Omar Vizquel without the speed (O.K.I apologize, there really is only ONE Omar Vizquel).

Do these batters love Target Field… or Twins' Pitching?
Twins need to get another quality starting pitcher, and not a #4 or 5 guy.
Running out of available free agents out there, so probably best to trade for one.

I agree with Einheri. It isn't that they love Target Field, they just love facing Twins Pitchers. I like the resigning of Pineda. Gives the Twins their 3 best starters back for next season.

I'm still waiting for the "Impact Pitchers" we've been told they are going to go after. 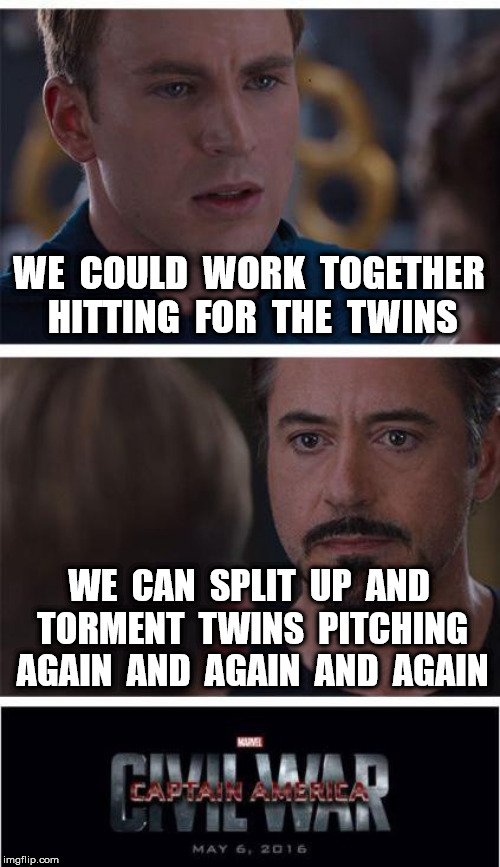 Donaldson, but for a 2 or 3 year deal at 20-25 million/year, I propose a better long term solution for third. Offer a prospect package that includes Arraez and Kirilloff to the A's for Chapman. This opens up 2nd base for Polanco and fill the hole at short with a good defensive shortstop. Buy out Chapman's arbitration years with an Alex Bregman type deal like 7 years/70 million.

Chapman would likely cost Arraez, Kirilloff, Balazovic and Graterol with maybe someone like James Kaprielian coming back to the Twins to even it out.Has Oakland made Chapman available? I doubt it.If we want to go with the idea that everyone is available for a price, I think the ridiculous package above will be that price.

OK, I take it back. I forgot the A's traded for Profar for 2nd base (which is why I suggested Arraez and Kirilloff) which would have given them a starting 2nd baseman who is much cheaper (the A's and Ray's are cheap) and our top outfield prospect and a couple of AA prospects that don't include our top pitching prospects.

If the price is right I would not mind Didi or Donaldson at 3B.I really think upgrading defense will help the most.We hit a ton last year, but when Buxton was out our defense was not strong at all.Even worse second half I recall, have not look at numbers to back that up though.

Gregorious signed a one-year deal with the Phillies.

Gregorious signed a one-year deal with the Phillies.

I'd have taken him at that price...