Minnesota Twins Talk Today, 09:21 PM
It just occurred to me, having watched every one of these 17 atrocities called baseball games, that the Twins almost always started stron...
Full topic ›

Apr 09 2016 10:53 PM | Matt Johnson in Minnesota Twins
The Twins Almanac is back with a look at this week in Minnesota Twins history. It starts with a big trade, but there are stories of bad weather in the Met Stadium and Metrodome eras and much, much more. Ron Davis, who had been an All-Star in ‘81, was one of the game’s first setup men, combining for a potent 1-2 punch with Hall of Famer, Goose Gossage. Davis still holds the Yankees record for consecutive strikeouts in a single game with 8 on May 4, 1981. Doug Fister established a new American League record for consecutive strikeouts in a game with 9 on September 27th, 2012. The Major League record belongs to Tom Seaver, who K’ed 10 in a row on April 22nd, 1970.
Ron Davis was never in all-star form in Minnesota, however. He tied a single season record with 14 blown saves in 1984, a dubious feat which no pitcher has matched since. Four pitchers had blown 14 saves in a season prior to Davis, including Hall of Famers Rollie Fingers (1976) and Bruce Sutter (‘78).

Incidentally, Goose Gossage (112), Rollie Fingers (109) and Jeff Reardon (106) have the most blown saves in major league history. Gossage’s six seasons with 10 or more blown saves are most all-time, followed by Fingers and Reardon, each with four seasons of 10 or more.

Ron Davis was sent to the Chicago Cubs in August of ‘86 as part of a trade that brought George Frazier to the Twins. Frazier pitched in 54 games for the ‘87 Twins. Davis never saved another game, pitching sparingly in relief for the Cubs, Dodgers and Giants through the end of the ‘88 season.

Though Davis was the object of the Twins’ desire at the time, Greg Gagne would obviously emerge as the key figure in this transaction. He didn’t make his major league debut until 1983 and even then only played 12 games between the ‘83 and ‘84 seasons before becoming a fixture at shortstop for the Twins from 1985 to 1992. He was a key component of the Twins’ ‘87 and ‘91 World Series championships.


The Twins had originally acquired Roy Smalley in the 1976 trade that sent Bert Blyleven and Danny Thompson to the Texas Rangers. In July of ‘84, the Yankees offloaded Smalley to the White Sox in exchange for players to be named later, one of whom wound up being Doug Drabek, who, after just one season, the Yankees in turn shipped off to Pittsburgh where he would win the 1990 Cy Young Award. The White Sox traded Smalley back to Minnesota in 1985. Smalley retired after the Twins’ 1987 World Series championship season.

Gary Serum was born in Fargo, went to high school in Alexandria, MN and pitched at Minnesota State Moorhead and St. Cloud State before being signed as an amateur free agent by the Twins in 1975. He played two and a half major league seasons with the Twins from ‘77 to ‘79. Despite posting a 9-1 record between AA and AAA in the Yankees organization, 1982 was Serum’s final professional season.

It’s the birthday of the inimitable Bob Casey (1925-2005), Twins public address announcer for 44 years. Casey was the only PA announcer in Twins history until his death in 2005. Casey also worked for the Minneapolis Millers, the Lakers and the Vikings.

The Twins played their first ever regular season game at Yankee Stadium. Harmon Killebrew collected the first hit in Twins history, leading off the 4th with a single to center. Twins pitcher Pedro Ramos and Whitey Ford were locked in a scoreless duel until Bob Allison led off the 7th with a home run, the first in Twins history. The Twins went on to win their first game 6-0 as Ramos pitched a complete game, 3-hit shutout versus the eventual 1961 World Series champs. Ramos held Yogi Berra, Mickey Mantle and Roger Maris to a combined 1-for-11, with Berra singling in the 1st. Ramos did not allow a base-runner after the 5th inning. Roger Maris would establish a new single season home run record with 61 that year.

The Twins would go on to a 5-1 record before playing their first home game in front of a crowd already deep in the throes of pennant fever. They would lose their first game in Bloomington, however, 3-5 to the new Senators, and finish their inaugural season 70-90, good for 7th place in the America League. 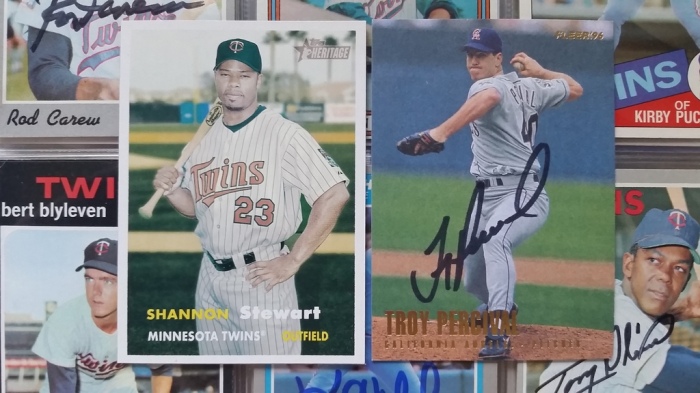 The Twins beat the Tigers 5-4 on a Shannon Stewart walk-off ground rule double off Troy Percival, who had not allowed an earned run versus the Twins in over 40 innings going back to 1995. Torii Hunter drove in Jason Bartlett to tie the game in the bottom of the 8th.

The Twins beat the Red Sox 5-2 in the first regular season game played at Target Field. Carl Pavano earned the win for the Twins. Jon Lester, the losing pitcher, walked Denard Span to lead off the bottom of the 1st. Orlando Hudson then collected the Twins’ first hit at Target Field.

After Mauer and Morneau made the first two outs, Michael Cuddyer collected the new stadium’s first RBI, driving in Span on a single to left. Jason Kubel then drove in Hudson, giving the Twins a 2-0 lead in the 1st. Mauer hit an RBI double in the 2nd, and an RBI single in the 4th. Jason Kubel hit Target Field’s first regular season home run leading off the 7th. Jon Rauch retired Kevin Youkilis, David Ortiz and Adrian Beltre in order for the save.

In just the second year of major league baseball in Minnesota, the scheduled home opener versus the Los Angeles Angels was cancelled due to six inches of snow.

The largest April snowstorm in Minneapolis’s history forced the postponement of a game versus the California Angels. The decision to postpone the game was made the night before out of concern that the Angels would not be able to arrive in Minnesota in time. Travel concerns were a moot point, however, as damage from the storm caused the Metrodome roof to collapse about twelve hours after the decision to postpone. The spring storm dumped over 13 inches of snow on the Twin Cities.

Cal Ripken, jr. became the 24th player to reach 3,000 hits in a 6-4 Orioles win at the Metrodome. Ripken entered the game sitting at 2,997, having collected 1 hit the night before in a wild 10-9 Twins win. Trailing 4-9, the Twins scored 6 runs in the bottom of the 8th before Eddie Guardado earned the save, retiring Ripken for the final out of the game.

On this night, Ripken was 2-for-3 when he came up in the 7th in a tie game with 2 out and Albert Belle on third. Hector Carrasco was brought in from the bullpen to face the Iron Man. Catcher Matt LeCroy gave up a passed ball on Carrasco’s first pitch, allowing Belle to score the go-ahead run. Then, on the second pitch of the at-bat, Ripken stroked a line drive single to center, becoming the seventh player in major league history to collect both 400 home runs and 3,000 hits.

Former Twin Mike Trombley came on in the bottom of the 9th to earn the save for Baltimore. Noteworthy in retrospect is the fact that Midre Cummings pinch-hit for the number nine batter, Torii Hunter.

Ripken was greeted at first after his 3,000th hit by base coach Eddie Murray, who had himself hit his 3,000th hit at the Metrodome in 1995 off of Mike Trombley as a member of the Cleveland Indians. The following season, while playing for Baltimore, Murray became just the third person in major league history with 3,000 hits and 500 home runs. Rafael Palmeiro and Alex Rodriguez have since joined the club.

St. Paul Central High School graduate and Golden Gophers legend, Dave Winfield, also collected his 3,000th hit at the Metrodome in 1993. 29 players have collected 3,000 hits in the 146 year history of major league baseball. Three of those reached the milestone at the Metrodome in a period of seven years. It is also noteworthy that of the 29 members of the 3,000 hit club, two (Winfield and Paul Molitor) were born in St. Paul just five years apart.

In a home game versus the Chicago White Sox, Eric Milton struck out the side in the 1st, including Frank Thomas. Milton went on to strike out 8 of the first 10 batters he faced. He allowed only 2 runs over 7 innings, those coming on a 2-run Thomas homer in the 6th, one of 521 he hit in his career, tied with Ted Williams and Willie McCovey for 19th all-time. LaTroy Hawkins earned the save in the Twins 4-3 victory, their 6th straight, improving to 9-2 on the season.

In the top of the 1st in game 1 of a doubleheader in Baltimore, Bob Allison hit the first grand slam in Twins history. Baltimore’s Chuck Estrada, who had tied for the league lead with 18 wins the previous season and who would win 15 in 1961, walked three straight to start the game before giving up a home run to the cleanup hitter, Allison. After giving up a double to Jim Lemon, Estrada was pulled, having pitched to just five batters. Relief pitcher John Papa didn’t fare much better, walking home two more Twins runs before Dick Hall, the third pitcher used by Baltimore in the 6-run 1st, came on to get the final out.
Bob Allison added a 3-run home run in the 6th, giving him 7 RBIs for the game. The Twins won 10-5.

In game 2, the Twins held a 4-2 lead going into the bottom of the 9th. With 1 out and the bases loaded, Baltimore crept within 1 on an RBI groundout. Then, with 2 down, runners on second and third and future-Hall of Fame manager Whitey Herzog pinch-hitting for future-Hall of Fame knuckleballer Hoyt Wilhelm, Twins pitcher Ray Moore unleashed a wild pitch, allowing Baltimore to tie the game 4-4.
In the top of the 11th, Zoilo Versalles hit a 2-run home run and Chuck Stobbs slammed the door in the bottom of the inning.

Apr 10 2016 06:46 AM
Does anyone else remember that September game against the Indians? 1984. We were 4 and half back in the old A.L worst, with like a 500 record. Up like nine or ten to nothing. And Davis was brought in to close it out in the 9th.
I went to Cooperstown that day. Had the mets on the radio on the ride home. Gooden struck out 17 for the rookie record. Those out of town scoreboard updates crushed my Twins pride.
Similar to this week

Apr 10 2016 11:37 AM
Jamie Quirk, right? The Rat Gary Gaetti saying you can't throw the ball to first with your hands around your neck.