Jul 17 2017 09:30 PM | Cody Christie in Minnesota Twins
Time and patience are two key aspects when it comes to developing prospects. Max Kepler fits this mold more than a lot of other young players. When the Twins signed him as a teenager out of Germany, the club knew of his athletic ability but Europe hasn’t exactly been a hot-bed for MLB prospects.

Kepler has played just over 200 games at the MLB level and he has found a way to provide value through all aspects of his game. There are areas that could still improve but Kepler is on a course to be an above average big leaguer for years to come. Image courtesy of Jesse Johnson-USA TODAY Sports
Only two short seasons ago, Kepler exploded at Double-A on his way to winning Southern League MVP honors. He hit .322/.416/.531 with 56 extra-base hits across 431 at-bats. These numbers were an improvement from his career totals in the minor leagues (.281/.363/.446) and many prospect followers believed he had put it all together.

Following a brief September call-up in 2015, Kepler became a mainstay in the Twins line-up during 2016. He struggled through his rookie campaign by hitting .235/.309/.424 with 17 home runs and 20 doubles. Hitting isn't the only part of his game as he provided 4.4 runs on the bases according to BsR (FanGraphs' base running statistic and the base running component of their WAR) and six defensive runs saved.

Kepler has made measurable strides in his second full MLB season. Compared to 2016, he's raised his batting average over 30 points and this has helped him to get on base almost 34% of the time. He has improved his wRC+ from 93 in 2016 to 108 in 2017. According to both Baseball Reference and FanGraphs, the only Twins position player worth more WAR this season is Miguel Sano.

He's hitting the ball hard as well. Last season, Kepler hit the ball at an average exit velocity of 89.4 mph. He ranked 81st among 225 hitters with a minimum of 250 balls in play which ranked him higher than the likes of Kris Bryant and Nolan Arenado. This season, his average exit velocity has dipped to 88.4 but he ranks 64th among 147 playerswith 200 at-bats. He's hitting the ball harder than Anthony Rizzo, Joey Votto, and Evan Longoria. 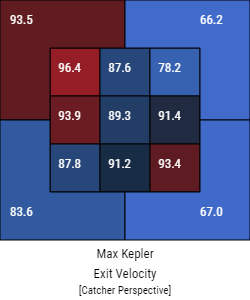 Earlier this season, I identified Kepler as one of a trio of players who was helping to spur Minnesota's defensive turnaround. He ranks in the top-12 among AL outfielders in defensive runs saved. This spring MLB Advanced Media introduced a new Statcast metric called Catch Probability, which measures how likely a fielder is to catch a given ball in play based on its distance and hang time. Kepler leads MLB in "three-star outs" as he has gone 15-for-17 in those opportunities. Three-star outs have a 51-75% chance of being caught.

To stay in the hunt for a division title, the Twins need young core players to perform at a high level. Jacque Jones was one of those players for the Twins in the early 2000s. He didn't have a season worth more than 2.0 WAR until he was 27-years old. Kepler has managed that in each of his first two seasons and he won't be 25 until next February.

Kepler may never be an all-star like Miguel Sano or track down fly-balls as well as Byron Buxton but he is slowly improving. His offense and defense continue to improve and he is part of the team's long-term plans. Fans should appreciate the value he has brought to the 2017 version of the Twins.

Show your appreciation for Kepler in the COMMENTS.

I'm with you. He had several nice plays again tonight.

AND Der Schlagger has moved into fourth on the Career Homers by a Player Born in Germany list. He's on pace to catch Mike Blowers in either late 2019 or early 2020.

Jul 17 2017 11:25 PM
Kepler had an amazing run last summer, that showed that he could be someone special, I think he will put up great numbers that will continue to improve for the next 4 - 5 years.

I never bought in on Kepler until he came up to the Twins and then I became a fan. If he stays healthy I could see him have 750 xbh and I think he will be a fringe gold glove candidate. I would not bet on him winning one but he might be in the discussion as the best fielding corner outfielder a few years.

I had heard that, and technically I think, his dad is a ballerino... ;-)

It seems to be mentioned by practically every visiting team radio broadcast when playing the Twins.

I believe it was either the KC or Cleveland broadcasters who recently asked Kepler what to call a male ballet dancer, and Max replied with "soloist".

It seems to be mentioned by practically every visiting team radio broadcast when playing the Twins.

Lots of time to kill between pitches in a baseball broadcast!

Max had been my favorite prospect to follow ever since watching him play with the roster of the Beloit Snappers during Spring Training of 2012. He was far and away the best player on the diamond in the week I was there watching, on a team that also included Miguel Sano, Eddie Rosario, and Kennys Vargas.

I was astonished he did not play in the Midwest League at all that season after that, but injuries may have had something to do with that.

Just for fun, some links from that Spring Training:

(edit: I meant Kennys Vargas, not the topic of the post Max Kepler, for the other top hitters that were playing on that roster)

Every season, the Twins should have at least one "Max Kepler Dollar Brat Night". Get Sheboygan to sponsor it.  Replace the regular lame walk-up music wiith Polka Music and "Wock Me Like a Huwhickane" by the German Band Scorpions (maybe the German language versions of songs recorded by The Beatles and Peter Gabriel). Maybe Bring Back Nickel "Bier" Night.  Max Schnell!!!!!

Jul 18 2017 10:11 AM
I believe he's just scratching the surface of his potential. And while I won't compare him to the powerful and dangerous Sano, or the uber talented Buxton, I wouldn't be surprised in a year or two if he isn't the Twins most complete hitter; factoring in AVG, OB, SLG, total bases, etc.

Loving Kepler. He's a great fit in RF and looks very comfortable over there. With him and Buxton in the lineup you can actually get away with playing someone like Grossman in the OF because they cover so much territory.

I hope he continues to improve the BA and the OBP. I don't think he needs to become a 30 HR guy to have a great, all-star career but he'll be a bigger weapon in the lineup if he's ripping doubles all day and hitting .280.

I would absolutely offer Kepler a long contract extension between now and next season.

Loving Kepler. He's a great fit in RF and looks very comfortable over there. With him and Buxton in the lineup you can actually get away with playing someone like Grossman in the OF because they cover so much territory.

I hope he continues to improve the BA and the OBP. I don't think he needs to become a 30 HR guy to have a great, all-star career but he'll be a bigger weapon in the lineup if he's ripping doubles all day and hitting .280.

Max looking like a doubles machine is why I think long term he is a perfect #2 hitter. 1/3 of the time they are at the plate with nobody on and 1 out. In that situation your job is to get into scoring position. Being left handed also shield the catcher a bit on attempted steals by the leadoff guy.

Yes, I agree with Trevor, give him a 10 year contract!!

Max looking like a doubles machine is why I think long term he is a perfect #2 hitter. 1/3 of the time they are at the plate with nobody on and 1 out. In that situation your job is to get into scoring position. Being left handed also shield the catcher a bit on attempted steals by the leadoff guy.

Yes, I agree with Trevor, give him a 10 year contract!!


I've wondered about him hitting 3rd with Sano moving down to cleanup.

Max ranks third among right fielders in both defensive runs above average and UZR/150, trailing only Mookie Betts and Yasiel Puig.

That zone profile is pretty impressive. Nice to have some hot spots both up and down in the zone, inside and outside too.

He is showing this year that he can readjust after pitchers adjusted to him (this is by far the biggest step that a hitter can make).

I will go a step further to predict that he will develop into a major threat and find himself in the #3 slot in the batting order in the next two years.

There is also a chance (20%) that he ends up with a better career than Sano.

Fun to speculate.  He certainly has shown the drive to improve and continues to show that he has more potential.  I am not wise enough to know if that is star level, but certainly a vital clog - like Bob Allison from the sixties.