Minnesota Twins Talk Today, 03:43 PM
Couple links about this story this AM.   Phil Miller of the Strib says: "The Twins’ piece of the blockbuster Mookie Betts trade has...
Full topic ›

Other Baseball Today, 03:25 PM
Trevor Bauer posted a video in which he rants on some interesting baseball topics...   In particular, he talked about things like th...
Full topic ›

Minnesota Twins Talk Today, 03:20 PM
BIG title right? But I think MLB is sitting at a unique precipice right now, and we, as baseball fans, should be concerned about everythi...
Full topic ›

Other Baseball Today, 04:37 PM
I can no longer say I want the Twins to emulate the Astros. Bush league maneuver to use cameras in order to steal signs.
Full topic ›

Twins Minor League Talk Today, 02:46 PM
On June 5, 2014, the Twins appeared to have made a move that would greatly impact their future middle infield for years to come. On that...
Full topic ›

Jun 03 2019 08:57 PM | Andrew Thares in Minor Leagues
The Twins had the fifth pick in Competitive Balance Round A, and with that pick they chose Matt Wallner to go along with their first-round pick Keoni Cavaco. Matt Wallner is an Outfielder for Southern Mississippi and a Forest Lake, MN native. Wallner was the Twins 32nd Round Pick in the 2016 MLB Draft out of high school. Image courtesy of © David Berding-USA TODAY Sports
As was expected from a high school player taken in the 32nd round of the draft, Matt Wallner did not sign with the Minnesota Twins, and instead opted to go play college ball. Wallner was originally committed to go play for the University of North Dakota, but when they dropped their program during his senior year, Wallner switched his commitment to the University of Southern Mississippi.

Wallner was a standout player during his three seasons at Southern Miss. In his freshman season, Wallner dominated both at the plate and on the mound. With the bat, Wallner had a .336/.463/.655 slash line with 19 home runs and 63 RBIs in 66 games. On the mound Wallner made 9 appearances, throwing 14 and 2/3 innings with a 1.84 ERA and 15 strikeouts. Wallner thrived with his fastball that occasionally touched 97 mile per hour. For his efforts, Wallner was named the Conference USA Freshman of the Year.

Wallner’s sophomore year at the plate was just as good as his freshman campaign, where Wallner had a slash line of .351/.474/.618 with 16 home runs and 67 RBIs in 62 games. On the mound Wallner didn’t quite have the same success as he put up a 7.98 ERA over 14 and 2/3 innings, effectively ending his pitching career.

After giving up on pitching, and deciding to focus solely on hitting, Wallner saw an increase in his power production in his junior year. Again, Wallner had an incredible slash line of .323/.446/.681 while compiling 23 home runs (just 3 shy of 4th overall pick JJ Bleday for the most in Division 1 baseball), and another 60 RBIs in 61 games.

***Listen to Across the Meadow's breakdown of the Wallner pick.***

I had the opportunity to get a firsthand look a Matt Wallner this past weekend, as the Southern Miss Golden Eagles were the 3-seed in the Baton Rouge Regional. Wallner played well in his two games against Arizona State, homering in both games against them. However, he didn’t have much success against the much better LSU pitching staff.

In the field Wallner look quite fluid fielding fly balls. Wallner showed off his cannon of an arm on a couple throws, but one thing I noticed is it takes a little while for him to get the ball out of his hand. There was a couple of times I thought there might be a play at the base with Wallner’s arm, but the throws ended up being late after Wallner didn’t get the ball out of his hand quick enough. Overall, Wallner was quite the presence on the field, and I came away last weekend very impressed with him.

But can Rooker throw 97 MPH?

Wallner's got some Gimenez potential!

I think he can be on the Larnach/Jeffers schedule. I think that makes a lot of sense. Let him adjust to pro life and meet the other 2019 college draft picks and some other prospects in E-Town for a month. Then push him up to Cedar Rapids to meet some more coaches and players. That'd be a very successful pro debut and put him in a position to start 2019 in Ft. Myers.

The Twins front office added a bunch of power to the lineup via free agency this offseason. Now in the draft, the organization is adding more power. They have added power in trades.

I mean, you consider Wallner, Rooker, Larnach, Jeffers, Raley... all acquired via the draft (and Raley via trade) in the recent past.

At least if he does not cut it as a hitter, they could try him as a pitcher down the road.I am a fan of picks like that here.There has been some high end pitchers that started first few years a position player.

Right down to getting drafted by the Twins twice.

Big fan of this pick as well.Massive power, maybe as much as any prospect in this draft.He may strike out a decent amount, but that's really only a problem if the approach isn't good enough to play.He walks a TON as well. To me that shows he will work deep into counts and will find himself in more advantageous situations.Plus the power skills play even with weaker contact skills if he can walk enough to still get on base at a high clip.

OBP + Power is the tool I would always approach.To me that shows approach/plate discipline + ability to drive the ball and drive in runs. That's the formula.

TLDR
Big college corner OF with huge power, strong statistical performance and arm strength.
Full Report
Wallner hit for power all three years of college, even while pitching part time as a freshman and sophomore. He has some of the most explosive raw thump in the entire class, and will hit balls 10 rows into the bleachers even when he doesn't get fully extended. He has some moderate swing-and-miss issues characteristic of hitters who have power-driven approaches, but he's also willing to take a walk. His is a traditional right field profile, and he's in the mix with late first, early second round college power bats.

Always love to see the Minnesota boys play for the Twins. 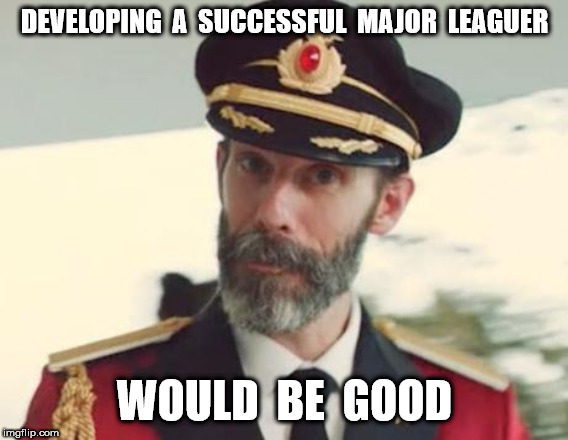