May 03 2019 11:47 PM | Seth Stohs in Minor Leagues
So far this week, we have handed out theoretical hardware to our choice for Twins Daily Twins Minor League Hitter of the Month and Starting Pitcher of the Month. Today, we will discuss the relief pitchers. Which bullpen arms had strong Aprils and got their season off to a fast start? Image courtesy of Seth Stohs, Twins Daily (graphics by Finn Pearson)
Normally, we write up a Top 4 or Top 5 and then highlight several honorable mentions. This month, there were six relievers that really stood out. We will profile all six of them.

I thought about putting Record in an Honorable Mention section only because of the innings, but his numbers when he did pitch were so incredible, so dominant, I wanted to write a bit about him. It is important to remember that after the Twins took Record in the 28th round in 2017 out of UC-Santa Barbara, he soon had Tommy John surgery. So April was his professional debut after missing two years. Obviously the Twins were going to be cautious with him, especially in the cold of the Midwest League, which explains the lack of innings. But in that limited time, batters hit just .040 (.151) against him. He struck out more than two batters per innings. And, after one more scoreless inning, and his fifth save, on May 1st, the 24-year-old was promoted to Ft. Myers.

Stashak was the Twins 13th-round pick in 2015 out of St. Johns. He signed and spent his first three pro seasons as a starter. In 2018, he was moved to the bullpen and named to the Twins Daily 2018 Minor League All Star team after a terrific season in Chattanooga. He returns to AA this year with Pensacola and got off to a very good start. As he has done through his career, Stashak throws a lot of strikes, but out of the bullpen, he has been able to increase his velocity some and miss more bats. He limits hard contact. Definitely ready to move up to Rochester.

Knight came to the Twins last December in the minor league portion of the Rule 5 draft after spending the first six seasons of his pro career in the Giants organization. The righty was San Francisco’s 28th-round pick in 2013 out of college. He had a great April in the Twins organization. He limited base runners, threw strikes and when he did give up base runners, he limited damage. He pitched in seven games, finished six of them, went 1-0 and completed five saves. At this stage, he is probably best known for his post-saves back flip in front of the mound. Unfortunately, on May 1st, he was placed on the restricted list which typically means that he will be out for the next two months or more.

Hackimer returned to the mound early in the 2019 season after missing most of the 2018 with an injury. In early October, he had a bicep tendon transfer surgery. He got a late start in spring training but he’s back and he’s been really good. The side-winding right-hander was completely dominant. Not only is he not allowing base runners (other than a few too many walks), but he is missing a lot of bats. Again, Hackimer is a guy who should move up to Double-A quickly.

Alex Phillips is an interesting case. Out of high school in Texas, he went to Arkansas and was good. He went to a junior college the next year (2015). Unfortunately, he had Tommy John surgery so he didn’t pitch again until 2017 when he attended Baylor. In 2018, he went 7-1 with a 2.40 ERA for Baylor but didn’t get drafted. He went to Evansville in the Frontier League. However, after 16 games there the Twins called and sent him to Ft. Myers. He pitched in two games for the Miracle before pitching more and pitching well in the Miracle’s run to the Florida State League championship. The 24-year-old started this year with the Miracle but as the calendar changed to May, Phillips was promoted to Pensacola. Phillips is blessed with a mid-90s fastball and an ability to throw strikes and miss bats. Most months, this resume and those results would win the top honors.

In April alone, Mason had four saves, splitting late-inning duties with Dusten Knight. Mason throws a lot of strikes and he gets a lot of movement. In the month, his 16 strikeouts to one walk ratio was remarkable. He worked high-leverage situations, threw a lot of strikes, missed a lot of bats and didn’t give up runs.

Mason can be an intimidating opponent on the mound. He stands 6-6 and is lean and strong. He has a grizzly beard and an animated delivery that makes his low-to-mid 90s fastball appear a little quicker than it is. He is able to keep hitters off balance with solid secondary pitches. He is able to work the eighth or ninth inning, and he is able to eat two or three innings when needed. That is important because when the Twins have a need in the big leagues, it could be for one inning, or three innings, at a time.

There were some really strong relief pitcher performances in April throughout the Twins minor league system. I mean, how do you pick between 0.00 ERAs? It was a good month for each of these pitchers mentioned today. Congratulations to Ryan Mason, the Twins Daily Minor League Relief Pitcher of the Month for April 2019.

Why was Knight put on the restricted list.Or is it not for publication.

I have never understood the career path for relievers.I look at the Twins reluctance to bring up relief pitchers from the minors and I am always confused by their desire to pickup strays from other teams before promoting from within.Since BP arms are erratic and go hot and cold during their career I would bring them up young when they are hot and see what works.Since they only pitch one inning at a time they cannot work on a lot and a RP needs only one or two good pitches.A healthy arm seems like the requisite asset.So, instead of playing games with failed SP like Mejia, try out some of these arms in MLB - they are already 24 so the clock is ticking.

A good read, and hopefully a nice prep for some guys who just might see time later this year with the big club given its inconsistent 'pen.Magill?Morin? 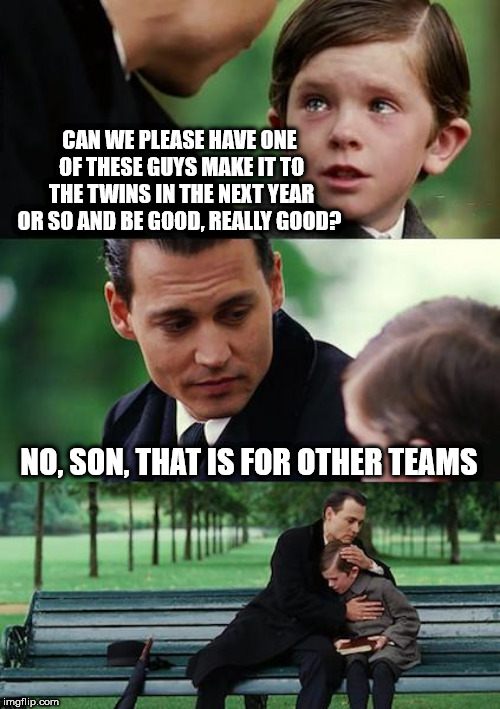 May 05 2019 09:50 AM
They probably put Knight on the restricted list simply because he might accidentally land on Sano's foot when he does a backflip.

They probably put Knight on the restricted list simply because he might accidentally land on Sano's foot when he does a backflip.

I have heard that it was not back flip related. As LaVelle blogged yesterday, Knight was released... and from what I have heard, it was well deserved...

As LaVelle blogged yesterday, Knight was released... and from what I have heard, it was well deserved...

No problem. I figured that was the case!

It does sort of put some of these minor league stats in perspective when they will just release a guy who's putting up a good line (admittedly he's 28 years old, but still).