Minnesota Twins Talk Today, 04:38 PM
https://www.skornort...lars-and-cents/   The owners have made their proposal to the players. The players association will now have t...
Full topic ›

Twins Minor League Talk Today, 12:00 PM
Kind of unbelievable, but I guess they might as well make money somehow now that baseball is shut down.   https://www.washingt...all...
Full topic ›

Minnesota Twins Talk Today, 11:26 AM
Catch-up After pitcher's duels in the first two games that were split between a Twins victory (5-0) and a White Sox victory (2-1), the th...
Full topic ›

May 31 2018 09:34 PM | SD Buhr in Minor Leagues
When Brian Dinkelman hung up his spikes as a player after the 2013 season, a defensive shift with three infielders on one side of second base was still a relative novelty being employed occasionally by the Houston Astros and perhaps one or two other teams at the Major League level. Less than five years later, “Dink” is in his third season as the Cedar Rapids Kernels’ hitting coach and he and Kernels manager Toby Gardenhire are seeing the infield shift deployed several times on a nightly basis – both against their team’s hitters and by their own infielders.

The times, they are a changin’.

Any regular observer at Class A Midwest League games would likely tell you that the Quad Cities River Bandits probably employ shifts more than any other team in the league. It’s not a coincidence that Quad Cities is the Class A affiliate of the Astros.

The Seattle Mariners’ MWL affiliate, the Clinton Lumber Kings, on the other hand, play a comparatively normal infield alignment against virtually every opposing hitter.

The Kernels fall somewhere in the middle of those extremes, but the shift is something that has clearly been an increasingly apparent part of their defensive strategy over the course of Dinkelman’s tenure as the club’s hitting coach.

And that’s fine with him.

“I don’t think it’s a bad thing for baseball.” Dinkelman said in an interview during his club’s latest homestand, “Because teams are studying other teams and they’re playing the chances of where they think the hitter’s going to hit the ball, where his tendency to hit the ball is. Now, if that gives your team an advantage to play your players in that sort of position, then I’m all for it, because you’re looking for any advantage for your team to be better than the other team.”

It may just be part of the natural cycle of teams trying to find the best way to win a baseball game, but infield shifts certainly have given hitting coaches like Dinkelman one more thing to think about as they help the next generation of position players to achieve their big league dreams.

So far, though, it’s not causing a dramatic change in how he and the Twins are teaching the art of hitting a baseball.

Lou Boudreau, as the manager of the Cleveland Indians, famously implemented the infield shift to try to contain Red Sox Hall of Fame slugger Ted Williams, but even Boudreau admitted later that his hope was that the shift would get into Williams’ head.

Whether or not that strategy worked against Williams is open to debate, but Dinkelman indicated that, as they’ve begun implementing the shift themselves, the Kernels have seen evidence that the mental aspect of facing the shift can’t be discounted.

“Where guys fall in trouble, and we’ve seen it even here at this level, is whenever they see a shift on, guys try to manipulate their swing to try to hit it where the guys aren’t and they end up making just weak contact or swinging and missing. 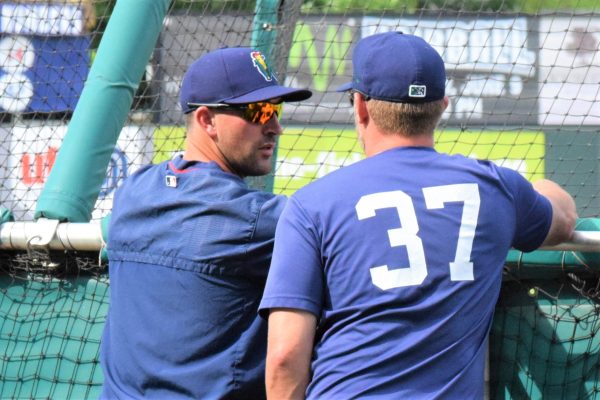 “Toby and I talked about that. You see (an opposing hitter) swing and he’s trying to shoot it the other way because he sees that everybody’s on (the other side of the infield) and that’s just not part of his swing and he can’t do that. So that’s kind of an advantage for us because he’s taking a swing that he doesn’t want to take.”
If that’s the case, would it make sense then to coach players to make that kind of swing a regular part of their game, in order to beat the shift? Are we on the verge of returning to the days where every hitter is coached to, “use the whole field?”
Not necessarily, but some attempt to broaden a player’s range is only logical, given the current defensive trends.

And what about bunting? Bunting has become a favorite target for ridicule from some of the more ardent supporters of more statistical metrics-based strategies who argue that giving up an out almost never improves a team’s chances of scoring runs.

But would bunting more, especially into an almost open side of the infield, make bunting once again become a more important skill?

“I think it is,” Dinkelman agreed. “I think that bunting still needs to be used if it’s the right situation in the game. If a guy’s leading off an inning and you need a baserunner or two and they’re playing a shift on you, giving you the whole left side of the infield for a bunt, I’m all for that. Because if you start bunting, they’re going to have to make an adjustment (to their shift) if you keep getting hit after hit.”

It’s not a strategy that they’re going to encourage every hitter to employ, however.
“Now, if you’ve got a guy who is a complete home run threat, then I’ll probably want to let him go ahead and swing the bat. Because if he hits a home run, that’s one run for us, where if he bunts and just gets a single, it may not do us a whole lot of good.

“I think it depends on the player, but I think the bunt is still part of the game, if that’s part of your game, a way to get on base to help produce offense for our team, then I’m all for it.”

This season, the Twins have entrusted millions of dollars’ worth of highly regarded young hitting prospects, including successive first round picks Royce Lewis and Alex Kirilloff, to Dinkelman’s tutelage.

While Lewis, Kirilloff and infielder Jordan Gore have been producing at the plate with batting averages staying above .300 and only rare and short periods of anything that could be considered close to a slump, many of the other hitters in the lineup have been slower to come around.

Granted, if you take away three .300+ stat lines from any team, the remaining team BA isn’t likely to be terribly strong.

Regardless, however, Dinkelman remains bullish on the rest of his offensive unit. 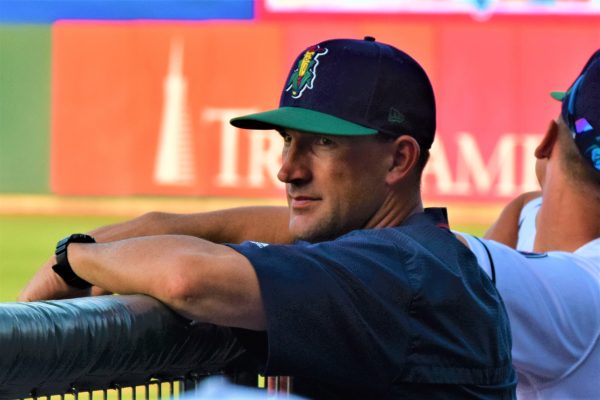 “They’re all making progress, they’re all learning the game,” he said.

“The thing with our roster is we’re so young. We work on things, work on approach and set up, stuff like that. Try to help get them through a daily routine of being a professional baseball player. But they’re coming along nicely.”

Nine of the 13 position players on the Cedar Rapids roster are 21 years old or younger and, even after Jacob Pearson’s 20th birthday party on June 1, three will still be teenagers.

These guys weren’t facing 94 mph fastballs and 86 mph sliders from every pitcher who stepped out of an opponent’s bullpen before they put on a Kernels’ uniform for the first time. But that’s what they’re getting accustomed to seeing in today’s Midwest League.

“These guys are new to this league or to pro baseball, so it takes a little bit of adjustment to get used to it, but they’re coming along,” Dinkelman said. “We’re about two months in now, so I think they’re starting to get the feel or understanding of a daily routine and what they’re going to face daily from the opposing team.


“It’s not always about the numbers right now at this level, it’s more about your mindset and making progress and building that routine so as the season goes along or as the seasons go on, you have that to fall back on.”

Outstanding stuff. There are always going to be dead pull hitters who will have success no matter where you put the fielders, but I have to imagine a hitter like Alex Kirilloff, who uses the whole field, is going to be valued more in today's game than he would have even five years ago.

Jun 01 2018 04:56 PM
Nice write up. Cool to see former players who may or may not have had much of an impact in the majors still be valued by their respective organization to be put into a coaching position.