The Show Must Go On: We Can Build This Thing Together

Mar 22 2020 07:31 PM | Nick Nelson in Minnesota Twins
Alright, so the MLB season won't be starting as planned, and real-life baseball might not be back any time soon. We can either continue to wallow in sadness or we can try to have a little fun.

Today I'm kicking off 'The Show Must Go On,' an interactive simulated Twins season where you all get to call the shots. While the details and player ratings aren't always spot-on (as we'll learn), the folks behind this game take baseball seriously. In general, The Show's accuracy and authenticity are very respectable.

So here's the deal. We're going to start a season as the 2020 Twins and chronicle it here. I won't be actually playing through the games myself, so my (lack of) skills will not be a factor. Instead I'll run through them in "Quick Manage Mode," which basically means every AB is simulated and only in-game decision making is controlled. I shall do my best to channel Rocco Baldelli while guiding the ship from day to day.

Incrementally throughout this fictional season, I'll post stories here updating the team's record, trends, notable performances, injuries, rising prospects, and so forth. And each of these updates will include at least one decision up for vote – a promotion, a trade, a signing, a shakeup of the batting order – so readers can shape the journey as it unfolds. I'll also be very open to suggestions of any kind in the comments section. The wackier the better. MLB The Show has budget limits and trade fairness thresholds that'll prevent us from dealing Ehire Adrianza for Mike Trout, but we're not exactly bound to the constraints of reality.

With the ground rules laid out, let us begin...

THE COUNTDOWN TO OPENING DAY

First things first, let's get acclimated to the Twins roster in the context of this video game. Minnesota ranks here as the fifth-best team in the majors, with the following breakdown:The teams ahead of the Twins overall are, in order: Yankees, Astros, Dodgers, Nationals. Sounds about right.

As we get our season underway, here's a look at the top 10 highest-rated players in the Twins organization, which will give you a good idea of the game's... wavering accuracy in evaluation:

Rosario is too high. Berrios is too low. Plenty of quibbles to be had. But for the most part, the ratings are all reasonable enough to resemble actual expectations.

One glaring exception further down the list: Michael Pineda has a 68 rating. For context, that is lower than Cody Gearrin (68), Jhoulys Chacin (69), and a fictional 19-year-old A-ball pitcher named Reid McMahon (72). I don't get it.

Speaking of Reid McMahon, another point of clarification: MLB The Show 20 does have minor-league teams, and – for the first time – many actual minor-league players! But there are still plenty of computer-generated randos, like our young southpaw McMahon. It would be possible to tailor the entire Twins system to reality, and also to edit Pineda's blatantly underrated attributes, but even in quarantine, that sounds too tedious. Throughout this exercise, the rule shall be: play it as it lies.

With this in mind, here's our season-opening pitching staff:

In video game land, we get the luxury of having Rich Hill right out of the gates. I did take the liberty of sending Matt Wisler to the minors since I was given the option. With the expanded roster, we're rolling with a 13-man staff, which includes two long relievers. Gotta be prepared for anything (and Dobnak/Smeltzer are higher-rated than alternatives).

Our virtual Opening Day takes place on March 26th against the Athletics in Oakland. It'll be Berrios against left-hander Sean Manaea. Here's the lineup I plan to trot out:

My thinking: stack righties at the top, and distribute lefties throughout, while bowing somewhat to the game's rating system. I'm very open to altering this approach if anyone has strong opinions. Feel free to share 'em in the comments section – all compelling cases will be considered.

Soon enough, I'll proceed with simming through the first slate of games. Then, we'll check back in with an update, and with more decisions to be made. But first, an unexpected one lies before us.

So, I mentioned earlier that while MLB The Show generally gets things right, roster-wise, there are invariably hiccups and inexplicable oddities. Here we have a prime example: for some reason, Jordan Balazovic is a free agent.

Yes, the top Twins pitching prospect, who is 21 and hasn't pitched above Single-A, is in the video game but is also – inexplicably – at the top of the MLB free agent pool, with a shockingly high 79 rating. That puts him ahead of fellow FAs like Yasiel Puig, Ben Zobrist, Scooter Gennett and Pat Neshek. (It would also tie him with Trevor May for fifth-highest rated pitcher on the Twins pitching staff... right now.)

Why has this happened? Who knows. But we gotta sign him, right? An initial inquiry tells us he'd likely accept a one-year, $100K deal, which seems strange but hey we're living in strange times. I do assume it would be an MLB contract and we'd have to keep him in the big leagues, which creates some complications.

Should we do it? I'll present the two options as comments below this article – whichever gets the most votes is the way.

Want more MLB The Show content? Cooper Carlson is through May in his more hands-off 2020 season simulation. It's going quite well! Ted Schwerzler wrote about the game's popular Diamond Dynasty mode.

...Today I'm kicking off 'The Show Must Go On,' an interactive simulated Twins season where you all get to call the shots.Last week, Sony released MLB The Show 20 for PlayStation 4. This franchise sits among baseball video game royalty (behind the king, MVP Baseball, of course) and the latest installment features up-to-date rosters, rules, AI, etc....

Option 1: Press "Like This" on this comment if you want us to sign Balazovic. He'd likely join our bullpen and displace one of our long relievers.

Option 2: Press "Like This" on this comment if you want us to leave Balazovic on the open market and enter the season with our roster as is.

It would be possible to tailor the entire Twins system to reality, and also to edit Pineda's blatantly underrated attributes, but even in quarantine, that sounds too tedious.

Don't worry, I'll have the Twins' right fielders done tonight and then I've got the entire roster finished. Been playing around with writing a post(s) about my crazy MLB The Show editing ever since I stopped going in to school.

Oh, and I signed Balazovic immediately.

We can't build this thing "together."We have to stay apart.Divided We Stand!!!

I have been reading your stuff since Nickstwinsblog, this is the greatest thing you have ever done.

The overall ratings get skewed in games because certain attributes give greater weight to the overall.I agree MVP baseball was best baseball game, and was way ahead of its time.It was the first game that used throws going offline even slightly, and a good AI.It took the Show many years to even catch up, and still from my last experience with the Show it still lacked some of the things that made MVP the best.

That being said, nothing like some of the classics RBI or baseball simulator, where the 3 outfielders and 1 infielder that is not assigned to go to a base all move in same direction at same speed.I remember the RBI baseball decisions that had to be made, do I move infielder out for short fly, or outfielder in.Pick wrong and in the park home run was very easy as the ball would bounce and roll away from the fielders.

I love the batting order.

Mar 23 2020 10:46 AM
Sounds like a blast! One question, are you running each game a single time through the simulation? Or are you running it multiple times and taking the delta?

My plan is just to sim them a single time and accept that as a result. But that's a good thought. Maybe if the results are wonky on first run-through I'll consider taking that route.

By overwhelming consensus (as I expected), we will be signing Jordan Balazovic for the bullpen.

I'll follow with another update later this week after we get through 10 games. 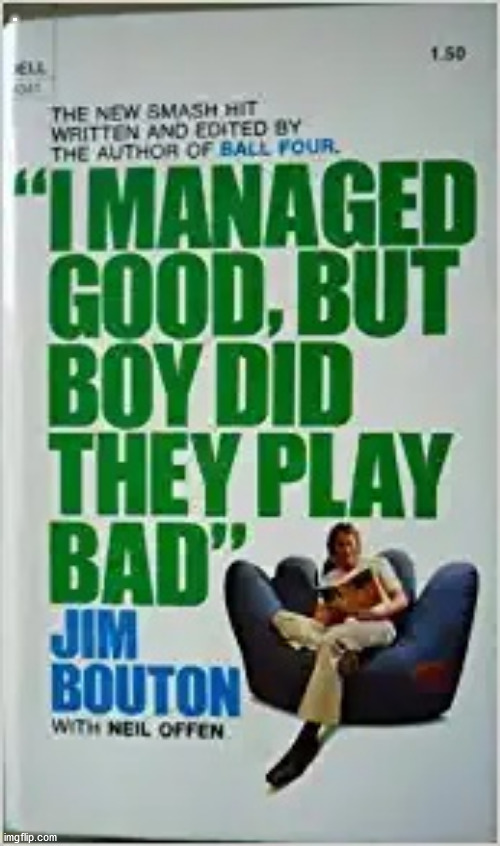