Other Baseball Today, 07:54 PM
My first prediction is that WA signs their two big possible FAs to extensions.   My next is that Cole goes to LAA.   The White...
Full topic ›

Minnesota Twins Talk Today, 07:22 PM
The season hasn't started yet, but I was motivated to start this thread a bit early after getting a message from Van, suggesting that I s...
Full topic ›

Series Preview: On the Road Again

Aug 15 2019 07:10 AM | Matt Braun in Minnesota Twins
It's been an interesting week since I last wrote one of these, as the Twins lost the division lead, got it back, and then shot themselves in the foot in trying to extend their lead. And that was just in the last three days! The good news is that the Twins will not have to play a team that is currently over .500 until September, but the bad news remains that they haven’t played incredibly inspiring ball in awhile. The more good news for me is that Texas is rich in their music history and the Willie Nelson reference was too easy not to make. Throw in some Stevie Ray Vaughan and everything feels alright. Texas remains a strange team this year as they didn’t appear to be any threat in the grand scheme of the AL, yet heading into the All-Star break they had plans for both buying and selling as they sat in striking distance of a wild card spot. They have fallen off the table since the break in winning just 12 games since while dropping 18, putting them at 60-60 headed into the series.


What They Do Well:

The Rangers are still very dead-set on swiping bags as they rank second in all of baseball in steals with 89. More impressive potentially is that they have 10 (technically nine since Asdrubal Cabrera has been released) players with multiple steals. The Twins have three for reference. So expect the base paths to be busy during this series, hope Jason Castro and Mitch Garver are prepared and ready for unleashing throws whenever. This also will put some more pressure on the suddenly walk-heavy Twins starting rotation as that free pass could turn into a guy on second base quicker than anyone would probably like.

Their starting pitching remains good, kind of, let me explain. Usually I would keep this under “Individuals of Note” but I have some special names for that so I’ll put it here. Anyways, the Rangers have gotten 10.1 fWAR out of their starting pitching and 9.2 of that has come from just Lance Lynn and Mike Minor. Just those two would be the 12th best starting rotation in baseball by fWAR, which is really fun but also a bastardization of how fWAR works so don’t be reckless like that. For context, Lynn is 2nd among all starters in baseball in fWAR and Minor is 15th. The point here is that they have a great 1-2 punch of arms here and the Twins will see both starters in the series so expect some tough fights in those games.


What They Do Not Do Well:

Since the All-Star break, the Rangers bats have fallen colder than Hoth, as their 79 team wRC+ is the second-lowest in baseball over that stretch. Do you know what Ben Revere’s Twins wRC+ was? 77, he’d fit right in. One of the big issues has been their 25.8% strikeout rate which is the third highest in baseball over that stretch, meaning that the Twins have a chance to pump up their strikeout numbers during the series.

The post-break woes don’t end there for the Rangers, however, as their team bullpen ERA of 5.49 is the 6th highest in baseball. This is partly thanks to a frightening 4.12 BB/9 that is the 8th worst in baseball over the stretch but should allow for some late rallies from the Twins lineup when their pen gets involved in the game. Matt Magill walked batters at a 4.02 clip during his time with the Twins so imagine an entire pen like that and try not to shudder.

Let’s talk about Emmanuel Clase. Who’s that? Well let me introduce you to a 21-year-old who can throw a 100 MPH CUTTER!

What in tarnation is this wizardry? Let’s see some more:

You have to feel for whatever poor Twins hitter steps up to the plate against this but boy is that something to watch. He hasn’t been in the Ranger’s bullpen for long but he most certainly has the pure stuff to stick.

You know, baseball is a funny sport. There are players out there who you swear fell off the face of the earth and were more likely to be working in a shipping yard in Argentina than back up at the major league level. Yet here is the one and only Danny Santana back and thriving in 2019 with the Rangers. He’s gathered 2.0 fWAR in just over half a season’s worth of playing time and his 126 wRC+ is almost as high as his 2014 total with the Twins. Is his 4.0% BB rate and .386 BABIP sustainable? Probably not, we saw him do the exact same thing in 2014 when his BABIP was sky-high and it was just as unsustainable then as it is now, but it is still weird to see him back in the majors like this.

Willie Calhoun has spent time as the designated “frequent flyer” for the Rangers as he has taken many trips from AAA to the majors and back this year as he attempts to shed the AAAA label. This year has been somewhat kind to the ex-top prospect as his 117 wRC+ is respectable and he owns enough talent to put it together and be a solid contributing member to the Rangers.

Joey Gallo would most certainly be here also, but he’s currently on the IL with a fractured hamate bone and will be out until at least early September.

The Twins played the Rangers right before the All-Star break in a three-game series at Target Field. The Twins took two of three with the lone loss being an extra innings heart breaker.

(This assumes that Michael Pineda is not activated and/or there is no other rotation shenanigans.)

The Rangers, by most numbers, have been an impressively mediocre team and they have been very poor ever since the All-Star break. An easier team to beat than the Indians and most likely an easier team than the Brewers but the pressure is still on the Twins to get good starts out the rotation, play solid defense, add on runs with their offense, and have relievers come up clutch when needed. All four things have been scarcely seen from the team in awhile and improvement in any of those areas will be key for the team going forward.

In previewing this series we need to look at some starling Twins stats too.

only Baltimore has allowed more home runs in the seventh, eighth and ninth innings than the Twins’ 55.

We now have 85 errors and have allowed 58 unearned runs.

We have five blown saves in August.

"Is his 4.0% BB rate and .386 BABIP sustainable? Probably not, we saw him do the exact same thing in 2014 when his BABIP was sky-high and it was just as unsustainable then as it is now, but it is still weird to see him back in the majors like this."

While a factor, Santana's current BABiP has much less to do with his 2019 value than his HR%. Even if the BABiP starts regressing, he'll still be plenty valuable if he continues to hit home runs at his current clip of 5.38% (better than Carlos Santana, about the same as Matt Chapman). 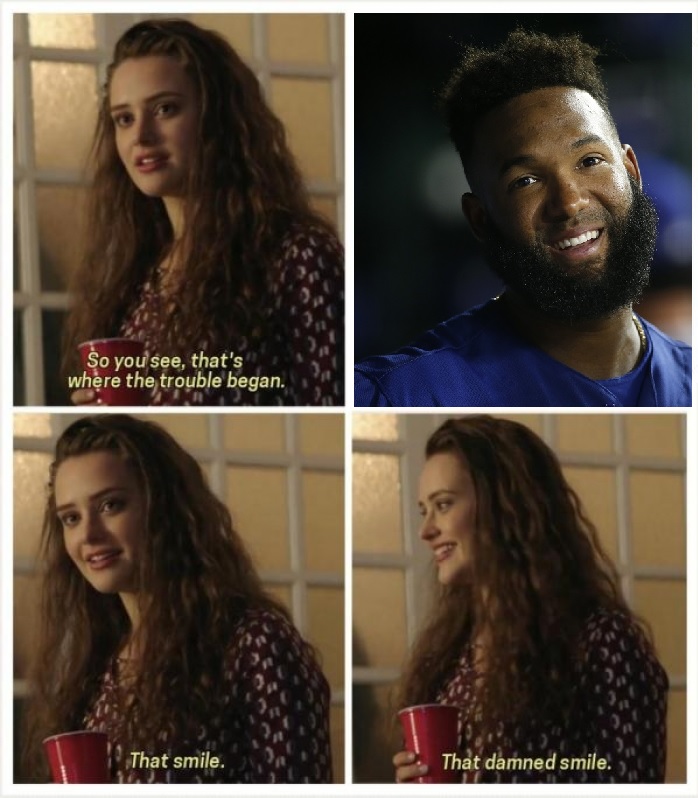 
Look at them soiling all my hard work like this, smh

"Is his 4.0% BB rate and .386 BABIP sustainable? Probably not, we saw him do the exact same thing in 2014 when his BABIP was sky-high and it was just as unsustainable then as it is now, but it is still weird to see him back in the majors like this."

While a factor, Santana's current BABiP has much less to do with his 2019 value than his HR%. Even if the BABiP starts regressing, he'll still be plenty valuable if he continues to hit home runs at his current clip of 5.38% (better than Carlos Santana, about the same as Matt Chapman).


Well his HR/FB rate is at 23.2% which is also pretty high, doubt that continues

For what it's worth I think the Rangers are quite a bit worse than the Brewers, despite their record's being similar. Minor and Lynn have just been tremendous this year.

Should be a fun series.

Great preview. I have nothing of substance to add. Just wanted to say I love Danny Santana. That is all.

Aug 15 2019 08:57 PM
I'll be at the Saturday night Sunday afternoon games. Last time I was able to make was Buxton's inaugural game. Wow, has it been that loooooooong?